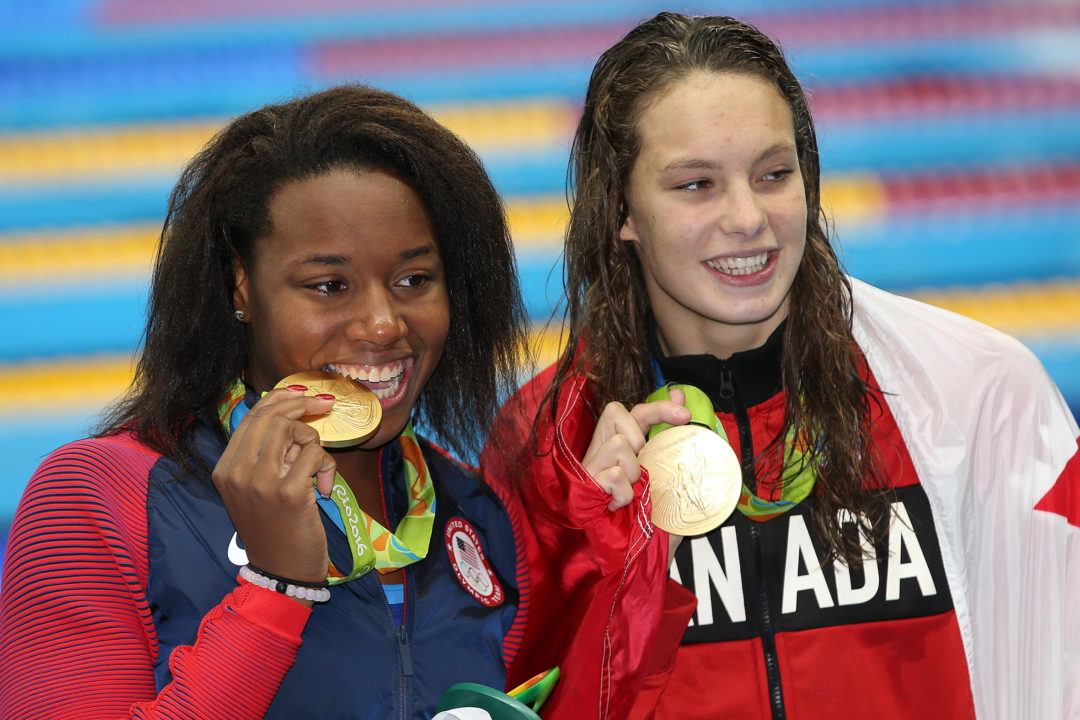 Simone Manuel and Penny Oleksiak vs Cate Campbell and Sarah Sjorstrom in the 2016 100 meter freestyle Olympic final. The data reveals how the winners won. Current photo via Simone Castrovillari

One of the nation’s fastest-growing swim school franchises is coming to Fairfield, Westchester County and Nassau County.

Smack Swim Strap, The Solution For Your Goggle Headache

Smack Swim Strap is designed specifically to provide an excellent fit while providing even pressure distribution over your whole head.

Bilateral breathing is a fundamental skill to achieve good alignment and symmetry.

TritonWear and Swim Swam are bringing you the best in swimming race analysis. With the power of TritonWear, you can have an in-depth analysis of your practice every day with zero effort. Today we are having a closer look of once-in-a-lifetime race of 2016 Rio Olympic Games.

The women’s 100m freestyle final at the 2016 Olympics was slated to be one of the most exciting races of the competition. It was entirely possible that the gold and silver medals could be claimed by sisters Cate Campbell and Bronte Campbell of Australia. Bronte had a pair of World Championship titles from the year before and Cate had just broken the 100 Freestyle world record heading into Rio. Speculation was rampant about who might take the Olympic title. But although the women’s 100 freestyle did turn into an epic showdown, it wasn’t at all as predicted.

Cate rocketed into the lead on the first length with incredible efficiency. Taking only 30 strokes, she flipped under world record pace in a blistering 24.77. Her stroke index value was 5.36, far exceeding that of every other swimmer in the race. Meanwhile, Bronte was only a few tenths of a second behind – it looked as though the Australian sprint sisters were indeed in a position to take the top two spots on the podium.

But other competitors began to move up in the back half of the race. Simone Manuel of the United States had the fastest turn in the pool by far, clocking in at 0.55 seconds. She used her momentum off the wall to surge into a long, powerful stroke – the only swimmer to increase her DPS on the second length. Sarah Sjostrom of Sweden also blasted off the turn to propel herself into striking distance of the leaders. She maintained a relatively high rate of 1.2 seconds per stroke that helped her close the gap.

With 15 meters to go, the field was nearly even. The Campbell sisters struggled to maintain their lead while Manuel and Sjostrom battled for an edge. But suddenly a new challenger entered the mix: Penny Oleksiak, the young breakout star from Canada. Nobody saw her coming – she’d split a full second slower than Cate Campbell on the opening 50 and was stuck back in seventh place. But Penny had been saving her energy to shift into a higher gear, hitting top speed in the pool at 1.85 m/s on the second length. Her powerful kick thrust her into medal contention as the swimmers neared the finish.

Manuel and Oleksiak broke into a slight lead in the final few meters and fought stroke-for-stroke into the wall. Spectators held their breath as they reached in synchronization and slammed the touchpad together to tie for gold in an Olympic record time of 52.70. Sjostrom got her hand on the wall next to claim the bronze in 52.99, shutting out both of the Campbell sisters.

The come-from-behind finish from two underdogs, resulting in a closely contested race that was exciting through the final stroke, made this race one of the most epic showdowns of the Rio Olympics.

TritonWear is revolutionizing training with data-driven coaching. Check out how coaches in Texas are putting down their stopwatches and concentrating on stroke mechanics.

With TritonWear  you can explore your practice with an in-depth analysis every day with zero effort and track your progress throughout the season. Train smarter with TritonWear.

Swim analysis is courtesy of TritonWear, a SwimSwam partner.

I remember watching this at 3:00 am (Europe) and be completely stuned. Nobody had even dared to believe this could happen. Il happens to be the one race that made me much more cautious about making predictions. Nothing should be taken for granted.

Same as the 2012 men’s 100 free. That race blew my mind. Taught me that it’s not the fastest swimmer that wins, it’s the fastest swimmer THAT DAY that wins. Still wish we could have seen maggy in his final form at a championship meet. Same with Tom Jager and many others I suppose. Back to the Gold medal vs WR debate I guess

Still one of my favorite Olympic races. I couldn’t believe the Americans even had a horse in this race, considering the stars already in it.

This was my most “wtf just happened” race I’ve ever seen.