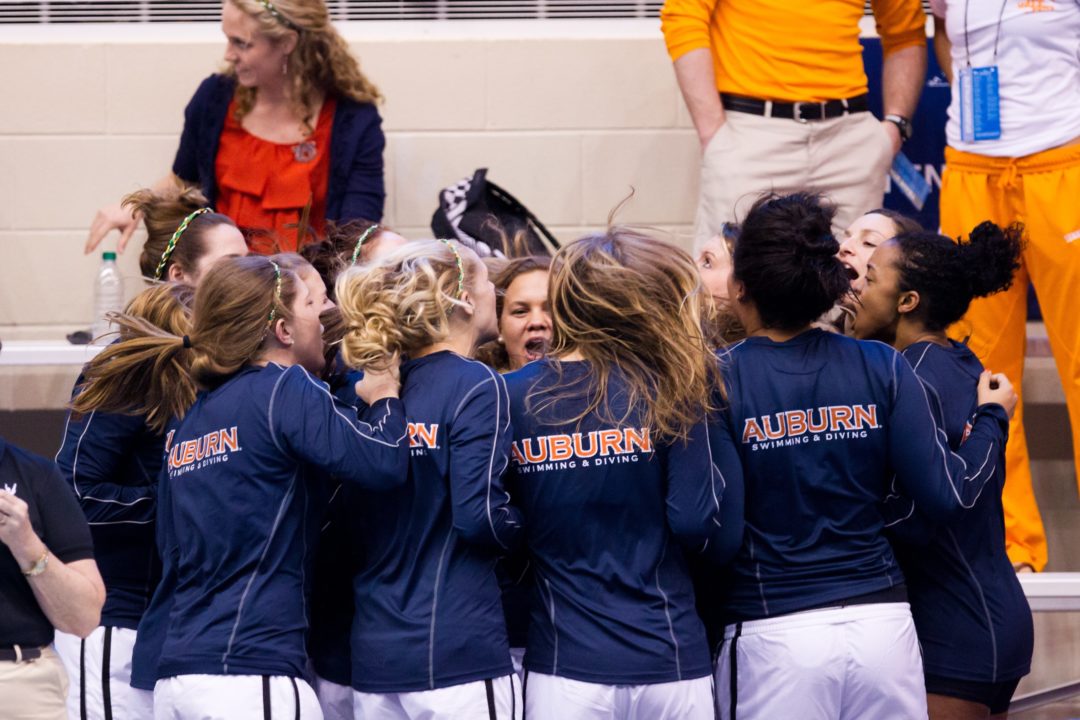 Queens University and Auburn University squared off against each other, with some special guests from SwimMAC Team Elite. Archive photo via Tim Binning/TheSwimPictures.com

With a terrific atmosphere in the Levine Center Aquatic Center, Queens University of Charlotte swim program represented its school extremely well as they went up against Auburn University and assorted professionals in the inaugural Royals Invite.

These Results courtesy of Queens Athletics and Auburn Athletics:

The Royals started off the night strong as Queens was able to get a third place finish from Meridith Boudreaux in the 1000 freestyle, as she raced to a NCAA B-cut qualifying time of 10:30.80. Adding to the Royals list of B-cuts and strong finishes were Lillian Gordy next who placed third in the 200 freestyle in the time of1:52.86, and Caroline Arakelian in the 100 backstroke in the time of 56.96.

One of the highlights for Queens was when freshman Hannah Pfeiffer placed first in the 200 butterfly, and set a new school record while gaining a NCAA B-cut time of 2:02.99.

Continuing the Royals impressive night was a third place finish from Arakelian, with a time of 2:01.53 in the 200 backstroke, which she quickly followed with another B-cut and second place finish by the 200 IM in the time of 2:05.00.

Ending their day on a positive note, the foursome of Alexandra Marshall, Arakelian, Gordy and Lauren Mock was able to place third in the 200 freestyle relay with a B-cut qualifying time of 1:36.44.

For the Tigers, freshman freestyler Allyx Purcell continues to shine at the collegiate level, keeping her win streak alive in both the 50 and 100 free. She posted a season-best time in the 100, posting a sub-50 second, 49.58, and beating former Auburn national champion in the event, Arianna Vanderpool-Wallace.

Purcell wasn’t the only freshman Auburn swimmer with multiple event wins as distance swimmer Ashley Neidigh took wins in both the 500 in 5:00.37 and the 1000 free in 10:06.19. Senior Emily Bos swept the backstroke races, taking first in both the 50 and 100.

The men’s side had much to be proud of as well, swimming well from the start. In the first men’s event of the day, the 200 Medley relay, Harry Traystman, Nic Eriksson, Matthew Josa and Hayden Kosater finished second with a time of 1:31.52. Following their swim was another B-cut with Alex Menke placing second in the 1000 freestyle with a time of 9:33.06.

Following Menke’s lead, Eriksson, in the very next event, gave Queens its initial first place finish for the day, placing first in the 50 breaststroke, breaking his own school record of 27.50 by a whopping 1.8 seconds for a 25.70. Josa followed that up the very next race with yet another wild first place finish. This time, it was the 200 freestyle with a B-cut time of 1:39.01.

To add to his already sensational night Eriksson then placed first in the 100 breaststroke, proving he was one of the most talented men at that stroke in the building.

Queens’ next placement came in the most exciting race of the night, the 200 IM. Going head to head against one of the most accomplished Olympians of all time, Ryan Lochte, the freshman Josa put on a show for the home crowd. He was able to beat the Olympian on the butterfly split, but finished just behind Lochte in a B-cut time of 1:49.43.

The final race of the night was almost as exciting as the 200 IM. The 200 freestyle relay was won by Auburn, but second place was a frantic battle throughout each leg. Queens was able to beat another Auburn team by .04 seconds, sending the Levine Center Aquatic Center into a frenzy.

For the Tiger Men, three members of the senior class dominated with five of the eight wins, a pair of those coming for James Disney-May in the 100 free and 50 back (tying with freshman Kyle Darmody). Zane Grothe took both victories in the 500 and 1000 freestyle events, while fellow senior Marcelo Chierighini won the 50 free with a 20.14.

Complete Results and Scores were not available at time of this post.