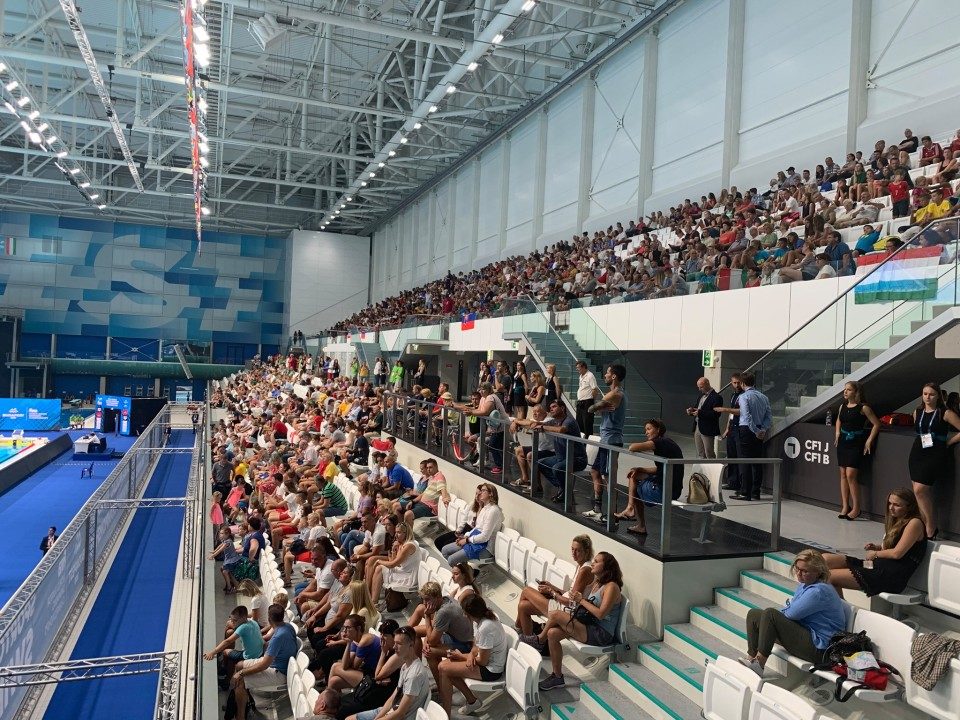 The best under 18 swimmers of the universe first came to compete on the European continent in 2019 at the FINA World Junior Swimming Championships. Current photo via Istvan Derencsenyi

In the relatively short history of the FINA World Junior Swimming Championships (the inaugural edition was held in 2006 in Rio de Janeiro, 33 years after the first FINA Worlds), the best under 18 swimmers of the universe first came to compete on the European continent in 2019.

Even though aquatic sports are hugely popular in Hungary, it’s always a challenge for organizers to attract spectators and to fill up the grandstands for junior meets. This statement is also true for other sport disciplines, as junior athletes simply don’t have the time to build up such a reputation, which could boost ticketing. In those cases when young adults are very competitive and successful, then they almost always skip their age group and contest against their senior rivals.

So Budapest and our LOC had the honor to welcome the best junior swimmers to Duna Aréna, a complex which was originally built for the occasion of the 2017 FINA World Championships, and which even in its legacy mode can host up to 5,000 spectators. Our goal was to address and to bring into the pool as many people as possible so that local swimmers feel extra motivated in front of the cheering crowd, and besides, we also wanted to amaze our foreign guests about the enthusiasm of Hungarian spectators.

1.     Sell a junior event with not yet well-known swimmers.

2.     The abundance of international swimming meets (’18 & ’19 Oct. FINA Swimming World Cup with the ’19 May FINA Champions Swim Series in between) give locals a bigger selection, hence junior events are not topping the preference list.

3.     Timing of the event 20-25th August, which was the last “valuable” weekend of the summer, meaning that families living in the capital were mostly still on vacation.

4.     Parallel to our event the kayak-canoe World Championships took place in Hungary (21-25th August), it being another hugely popular sport to watch.

All in all some kind of extra magic was needed so that we could reach our goals and make it into the news.

Building blocks of our marking and communications strategy

The idea came in 2018 that we could present the well-known Hungarian invention, a beloved 3-D combination puzzle in our own setting, making it a great motive of our event.

The story of the Rubik Cube started in 1974, marking the 45th anniversary of the invention in 2019, moreover another jubilee, the 75th birthday of Mr. Rubik 5 weeks prior the FINA juniors served as a valuable ammunition for our communication. We approached the local representative of Rubik Brand and after our discussion they became very enthusiastic about our idea, especially because of the common, under 18, international target group.

The main message which we gave to our graphic designers was to be simple and clean. We asked them to come up with such visuals which vary from past events, so instead of wavelike, spherical shapes be different this time. The result was a simple logo inspired by Hungarian folk motives, the world famous Rubik’s cube and the silhouette of a swimmer.

2.     Cubeman, as a special gift to medal winners

Ernő Rubik elaborated Cubeman back in 1977, but never launched his idea. The FINA World Juniors was just the perfect occasion to offer this human-like cube with arms and legs, which could also be rotated (though in a much slower pace then speed cubes). Every athlete who stepped on the podium received next to the square shaped medal a Cubeman, which became very popular and appeared on several photos.

3.     Brand ambassadors who appeal to a wider audience not just to the junior swimming community

Back in February we invited Ajna Késely and Kristóf Milák to be one of those 4 athletes who look back from posters, banners and other communication materials. They have just stepped into their first senior year, but by then they had already built up a reputation of being the next big stars of Hungarian swimming. Both of them were European Champions, Youth Olympic Champions and, most importantly, the first male and female World Junior Champions of our country from the last edition, 2017 Indianapolis. They were the perfect choice to stand next to Blanka Berecz (who later finished second in Budapest) and Gábor Zombori (who was the only Hungarian gold medallist at our event).

The presence of Ajna and Kristóf became even more valuable when at July FINA World Championships, both of them swam personal records. For Ajna it meant a 4th place in 400 free (just missing the bronze by a few hundreds of a second), whereas Kristóf swam a huge world record in 200m fly, beating the old WR time of Michael Phelps!

The message of the Hungarian version was to do sports and not just spend time with your mobile phones (“Sportolj, ne csak kockulj”) used a teen slang, so it touched the heart of both the youngsters and their parents who learn new expressions from their kids. The English title “Swimming Cubed” referred to the fact that it was all about swimming, ranging from the Rubik cube cooperation, to square shaped medals, CubeMan gifts, to the cube shaped swimming pool.

a)     We chose a rather unusual and active way for our press conference where we organized a race between junior swimmers and speed cubers. Swimmers in a 4*50m free relay competed against 4 speed cubers who had to solve 2*2 and 3*3 Rubik Cubes. After their race Kristóf and Ajna were available for interviews, so a massive media interest helped kick off our event.

b)    On the last 2 days of the juniors after the morning preliminaries we gave the field of play to the World Cube Association who organized a speed cubing contest. Almost 100 participants played each day, for whom the biggest prize was to meet Mr. Ernő Rubik, who visited our venue on Sunday. He presented diplomas and prizes to the winners, and his interview by the pool deck became an award winning story at the editorial team of Nemzeti Sport, Hungary’s leading daily sports paper.

c)     To pay tribute to Mr. Rubik, we lit Duna Aréna with special colours during the nights, imitating that the building is like a huge Rubik Cube. Not surprisingly this again made it into the news, helping to spread the news about our event.

In conclusion we can say that it is worthwhile to look for such partnerships where you give the floor to other events and offer your public additional experience, and not just the joy of your core sport. It’s so much more than creating synergies, as you not only attract additional public to your sport event, but you also win the hearts of those who visit your country, who will be extra motivated to return as a competitor or as a supporter. You swim in the waves, but sometimes swimming cubed gives you the best experience!