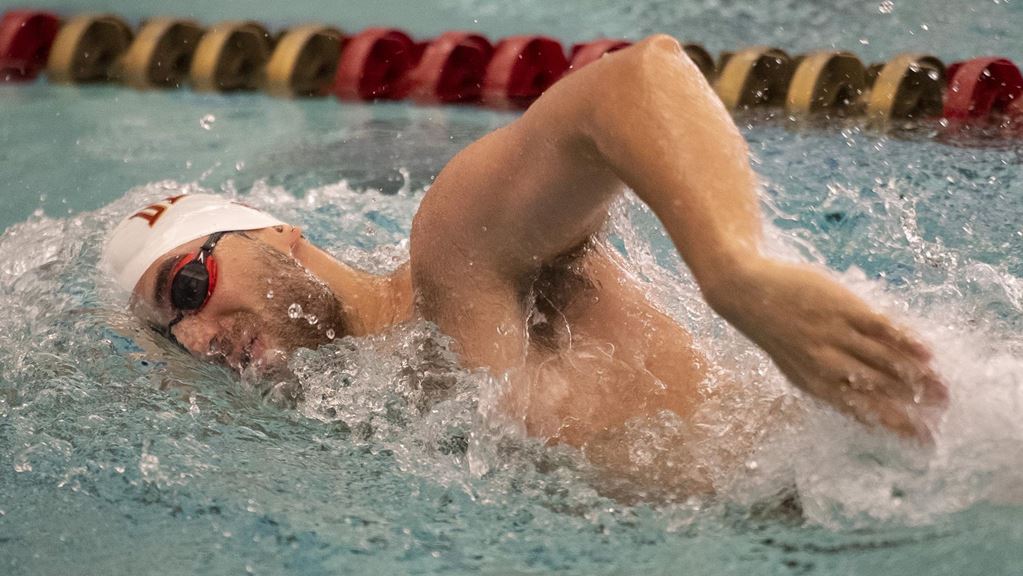 Cameron Auchinachie had a hand in 3 Pool Records, including a 400 free relay record that has stood in Laramie for 35 years. Archive photo via NCAA Photos

Two of the top mid-major teams of the Western U.S. battled on Friday with the Denver men and Wyoming women coming out on top. With Laramie, Wyoming sitting at over 7,000 feet, results are as clocked above, but will go into the NCAA times database with altitude adjustments.

He didn’t swim any 50 freestyles at this meet, though he ranks 4th nationally in that event this season with a 19.13 that he swam mid-season. That time has already secured his NCAA Championship invitation.

In total, Denver won 10 of the 16 men’s events on offer. That included the only NCAA standard of the night when Sid Farber took the men’s 50 free in 19.87 – winning by almost a second. That’s another new Pool Record for Denver, breaking the 20.17 done by BYU sprinter Brett Allen in 2006. Farber has been 19.18 this season and ranks 6th nationally.

Among the wins for Wyoming was junior Brayden Love, who topped the men’s 100 fly in 48.24. That’s not a season-best for him, but it is about 2 seconds faster than he swam in January last season. The time also breaks the old Pool Record of 48.75 that was done by George Eglesfield of Wyoming in 2015.

The women’s meet swayed the way of Wyoming by 12 points thanks to a gutsy final relay performance. The two teams touched only .06 seconds apart in the 400 free relay, with Wyoming anchor Lainee Jones splitting 51.42 (9-tenths faster than she was in the individual 100 free) to get her relay to the wall first in 3:28.14. Under pressure, the Denver women’s 400 free relay was disqualified for an early exchange. While that DQ by itself didn’t fully explain the 12-point gap, if Denver had won that relay, they would have won the meet.

Denver is back in action next Friday on the road against BYU followed by a trip to Salt Lake City to swim Utah. Wyoming’s next meet is on Thursday against Cal Baptist.

LARAMIE, Wyo. – The University of Denver men’s swimming and diving program got back in the win column with a 165-135 win over Wyoming on Friday evening at Laramie High School. Denver’s women fell by a 12-point margin in Friday’s dual.

Senior Andi Johnston (Fort Collins, Colo.) led the Pioneers in the women’s 1000 free to open up the individual races on Friday evening, taking second with a 10:38.85.

Denver’s men took three of the top four spots in the distance race led by 1-2 finishes from senior Colin Gilbert (Kamloops, B.C.) and classmate Jesse Haraden (Ballston Spa, N.Y.), who finished with times of 9:38.21 and 9:51.10, respectively.

Sofia Nosack highlighted Denver’s 100 back, reaching the wall in 57.95 to take second. Auchinachie won the event on the men’s side with a 48.80, out-swimming teammate Neil Wachtler (Waco, Texas), who finished second in 49.96.

Simon picked up the women’s program’s first individual win on Friday evening, taking the 100 breast with a 1:04.38. For the Denver men, Jager and classmate Anthony Nosack (Beaverton, Ore.) took second and third with times of 56.77 and 56.96, respectively.

Cronin led Denver to a podium sweep in the women’s 200 fly, taking the race with a 2:04.92. Junior Uma Knaven (Chapel Hill, N.C.) and classmate Deniz Ozkan (Istanbul, Turkey) completed the top three spots for the Pioneers.

Denver’s women made it three wins in three events when senior Sarah Lingen (Maple Grove, Minn.) reached the wall first in the 50 free with a 24.35. Farber completed the Denver sprint sweep with his NCAA B Standard time of 19.87.

Valette got back in the water after a swimming break for diving, and won the 100 free with a time of 51.16. Auchinachie won the men’s race to complete a four-for-four effort in the short freestyle races for the Pioneers with his 44.68.

Sophomore Patrick Groters (Santa Cruz, Aruba) and Sofia Nosack each turned in second place performances in the 200 back for the men’s and women’s programs with times of 1:52.90 and 2:05.48.

Denver capped off the meet with a victory in the men’s 400 free relay. Farber, Spencer Adrian (Portland, Ore.), Auchinachie and Sykes combined for a time of 2:59.89.

Freshman Jason Gleason (Olalla, Wash.) finished second in the 1-meter dive for the men to highlight the Pioneers diving efforts on Friday.

“Overall, Denver is a phenomenal program and extremely talented on both the men’s and women’s side,” head coach Dave Denniston said. “I thought the fight of both of our squads showed especially in the later part of the meet is something we can really learn and grow from. It sets us up for our remaining dual meets and the rest of the season. I really like where we are at on both sides. We have great leadership from our seniors and they’ve done it by example. They come in get to work, set the standard and expectation of this team and it really showed in this meet.”

Both squads opened up the meet with a second place finish in the 200-yard medley relay. The team of freshman Emily Giles, sophomore Phoebe Browne, junior Hannah Mclean-Leonard and sophomore Lainee Jones touched the wall in a time of 1:45.02. The men followed that up with a mark of 1:29.72 with the team of senior Tyler Klatt, sophomore Grant Sloan, junior Brayden Love and senior PJ Musser.

In the women’s 1000 freestyle, senior Daniela Luna Rocha notched the first win of the day for the Cowgirls with a time of 10:32.73. Freshman Roxanna Ramirez was also in the points with a third place time of 10:50.33. For the men, two Cowboys finished in the scoring. Sophomore Ryan Netzel went 9:55.55 for a third place spot while senior Seth Borgert went 10:09.03 to place fifth.

Sophomore Lainee Jones recorded a first place finish in the 200 freestyle with a time of 1:52.70. Freshman Olivia Staver touched the wall in 1:57.41 to take fifth followed by sophomore Maggie Clerkin and senior Ellie Hohensinner with times of 1:58.92 and 2:03.88, respectively. Senior Jacob Harlan finished second in a time of 1:42.99 while Crump had a season best time of 1:44.20.

In the women’s 100 breaststroke, Phoebe Browne touched the wall in a time of 1:05.83 to place second. Rylie Pilon and Stephanie Grandin finished fourth and fifth with times of 1:07.58 and 1:07.69. Sophomore Mitchell Hovis took first for the Cowboys in a time of 56.58, while Sloan went 58.31 for place fourth.

The men swept the 200 butterfly led by Love who finished first with a time of 1:49.60. Freshmen Thomas Diaz and Cameron Murphy finished second and third with times of 1:53.49 and 1:55.64, respectively.

After the diving break, Jones would record a second place finish in the 100 freestyle with a time of 52.33, while Carsrud placed fifth in 53.73. Musser also finish second for the men touching the wall in 45.86. Sophomore James Bouda finished in fifth with a time of 46.65.

Phoebe Browne won the 200 IM with a season-best time of 2:07.67, beating her old mark by over two seconds. Niemann was also in the points with a 2:09.47 to finish third. The men were solid in the event with three in the scoring column. Freshman Thomas Diaz completed the sweep for the two teams winning the event in 1:55.80. Klatt was close behind touching the wall in 1:56.28. Love completed his night in third with a time of 1:57.04.

It was neck and neck between the women with it coming down to the final race of the night in the 400 freestyle relay. The team of Blattner, Giles, Carsrud and Jones edged out the team of Valette, Lingen, Linsay and Leckie with a time of 3:28.14. Musser, Bouda, Crump and Netzel helped the men to a second place spot in a time of 3:05. 58.

“Between the women, it was a battle all day and came down to a point here or there. I told Phoebe (Browne) and Andrea (Niemann) that someone needed to win the 200 IM because that was the only way we had a chance to win the meet. They both told me they could do it and Phoebe ended up winning in one of the best races I’ve seen her swim. The ladies took care of the relay at the end. On the men’s side, Brayden (Love) has just gone to the next level, which was apparent how he dominated his races. Mitch (Hovis) was solid and Thomas (Diaz) winning the 200 IM was big for our team.”

On the boards, the Cowgirls would get off to a strong start by sweeping the 3-meter event. For the women, redshirt junior Karla Contreras finished first with a season-best 325.05. Sophomore Abigail Zoromski also had a season-best mark of 268.05 to place second while freshman Melissa Mirafuentes was third and a score of 262.80. For the men, sophomore Brendan Byrnes would put on a strong showing posting a score of 288.68 to take first. Junior Elijah Chan finished right behind in second with a season-best score of 265.73.

In the 1-meter event, the Cowgirls went 1-2-3 including Contreras at the top of the podium. She finished with a season-high score of 315.30. Mirafuentes would take second tallying a final score 294.38 while Houlihan would follow with a score of 227.33. For the men, Byrnes would earn another first place finish with a season-best score of 300.15. The mark would meet the NCAA Zone “E” qualifying standard. Freshman Payton Lee placed third with a career-best 273.90 as did Chan with a mark of 269.70 to finish fourth.

The Cowboys and Cowgirls will be back in the pool next week on the road. Both squads will face Cal Baptist on Thursday, Jan. 16, followed by a conference match-up with the UNLV Rebels on Saturday, Jan. 18. Thursday’s meet is scheduled for 2 p.m. MT in Riverside, Calif., while Saturday is set to begin at 1 p.m. in Las Vegas, Nev.

Denver has a pair of big time sprinters, and a top 5 200 free relay on men’s side. could they score in top 25 at NCAA?

I think for sure they could. Right now, Swimulator actually puts them 11th, which I think is lofty. https://swimswam.com/swimulator/?type=conference&gender=Men&division=D1&conference=Nationals&season=2020&taper=Top+Time&date=Whole+Season&heats=16

Last year, they were 36th with 7 points. It only took 26 points to place 25th (though last year was a little bit of a wonky year scoring wise at Men’s NCAAs). That was all Auchinachie (no relays, no other qualifiers). This year they’ll send a “squad,” and Cameron will have confidence having done this before. They also should cruise to a conference title, so that leaves them some taper flexibility as well.