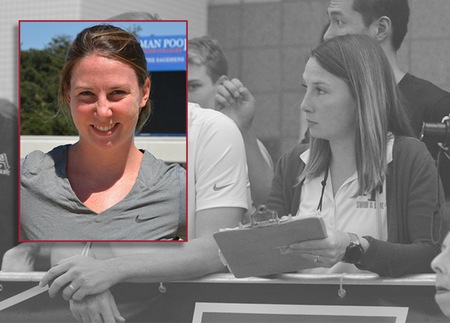 Sisson French takes over for Dani Korman after four years as an assistant and associate head coach for the Sagehens. Current photo via MIT Athletics

“I am very excited to welcome Meg Sisson French to MIT as she enthusiastically takes on the role of men’s and women’s swimming and diving head coach and physical education and wellness instructor,” MIT associate director of athletics/senior woman administrator Barb Bolich said. “Meg brings a wealth of experience in coaching and teaching at both Pomona-Pitzer Colleges and Springfield College. She is a successful coach and committed educator whose valuable contributions will be felt on day one.”

Sisson French joined Pomona-Pitzer in Claremont in 2015 and served as an assistant for two years before getting promoted to associate head coach for the past two seasons. She also served as the interim head coach in the fall of 2016 and managed recruiting efforts.

Under Sisson French’s watch, the Sagehens notched five SCIAC titles, including back-to-back titles for both the men and women in the last two years. In her time there, three athletes posted top-10 finishes at the NCAA Championships.

“I am honored and excited to join the MIT community as the men’s and women’s swimming and diving head coach,” Sisson French said. “I would like to thank Julie Soriero, Katie Hoppe and the entire search committee for this incredible opportunity. MIT is an outstanding and unique institution. I look forward to working with the incredibly talented and dedicated student-athletes, building upon the team’s past success and serving as an instructor within the physical education and wellness department.”

Sisson began her collegiate coaching career as a volunteer assistant at her alma mater Springfield College in the 2012-13 season, then was a graduate assistant there from 2013 to 2015.

Sisson French’s hire makes her the third-straight female head coach at MIT; the Engineers are the only team in Division III’s top ten with a woman in that role.

Way to go, Meg! A wonderful hire by MIT– the future continues to be bright for the Engineers!