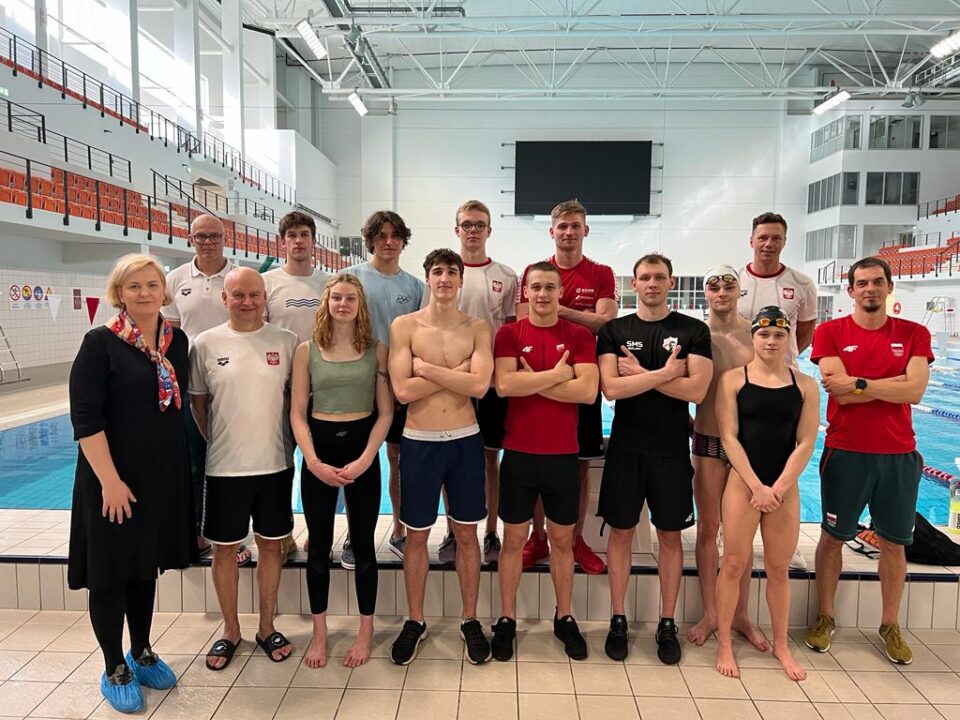 Olympic gold medalist Otylia Jedrzejcak (far left) and the Polish Swimming Federation says that they won't attend the 2022 World Championships if Russia and Belarus are there.

The Polish Swimming Federation is the latest European team that has announced that it will boycott this year’s World Aquatics Championships over FINA’s decision to allow Russian and Belarusian athletes to compete.

Otylia Jedrzejcak, the president of the Polish federation and herself a three-time Olympic medalist and two-time World Champion, made the announcement on Friday in a press release.

“The Polish swimming community, like most representatives of the free world, is shocked by the events that are happening in Ukraine. The attack of the Russian Federation on an independent country must be associated with the exclusion of the aggressor from the international community in all areas of life, including sports. None of us can imagine today a sports competition with players from Russia or Belarus that supports aggression in Ukraine.”

The statement said that if FINA were to change its position and block Russian and Belarusian athletes from competing in June’s event in Budapest, that Polish athletes would once again compete.

Switzerland previously said that they also would not compete if Russian and Belarusian athletes are present.

The Russian invasion of Ukraine strikes close-to-home for Poland, and is striking even closer as the war moves to the western part of Ukraine and Lviv, which is only about 43 miles from the Polish border.

Poland, a member of NATO, fears that Russian aggression might not stop at the Ukrainian border as the war moves closer. Poland currently has an estimated 2 million or so Ukrainian refugees, which is bigger than the population of the country’s capital and largest city Warsaw. International aid has flooded to the country to assist Poland in hosting the refugees.

FINA is one of the few international sporting organizations to have not banned Russian and Belarusian athletes over their governments’ attacks on Russia. Even shorter is the list that FINA sits at the head of: international sporting organizations that are still planning to host major events in Russia this year. While minor diving, water polo, and artistic swimming events have been moved, and the World Junior Swimming Championships have been canceled/are in search of a new host, December’s World Short Course Championships are currently still planned to be held in Kazan.

FINA has said that they were skeptical of the legality of banning Russian and Belarusian athletes from competition. That argument was dealt another minor blow when the international Court of Arbitration for Sport on Friday again rejected a request by the Football Union of Russia to stay a FIFA decision to block Russia from being able to participate in international sport, including World Cup qualifying events. CAS previously rejected a request for a stay of a similar decision by UEFA, the European governing body.

FINA said that rather than a blanket ban on Russian athletes and officials at international competitions, they would instead take a case-by-case approach. They have also banned Russian and Belarusian flags and symbols.

The UK government has allowed tennis superstar Daniil Medvedev to compete, but only if denounces Russian President Vladimir Putin. At an Artistic Gymnastics World Cup in Qatar earlier this month, Russian gymnast Ivan Kuliak wore the letter “Z” on his leotard, which is a symbol that has come to represent the Russian army invading Ukraine.

Poland sent 17 swimmers to compete in individual events at the 2019 World Championships. While they earned no medals, Radoslaw Kawecki came very close in the 200 backstroke (1:56.37). Kasia Wasick placed 5th in the women’s 50 free at last summer’s Olympic Games.

Poland’s last medalist in any discipline at the World Aquatics Championships came in 2017, when Wojciech Wojdak took a silver medal in the men’s 800 free.

I’m not a fan of athletic boycotts — especially in the name of a political aim. I watched what they did to the 1976, 1980, and 1984 Olympics. Those hurt the most were the ones with the least amount of power: the athletes.

I knew Americans who made the 1980 Oly team who never got a chance to compete because of Carter’s decision to boycott the Moscow games (because of their 1979 invasion of Afghanistan). They felt that the boycott accomplished very little — and were still smarting from Carter’s decision 15 years later. Of course Worlds are at a different level from the Olympics.

I feel this is sad, and I dont agree with this. I agree Russia is the agressor here, but to weaponize sports again, like in the cold war, is not wise. is russia worse than china? or israel vs iran?
I also think this is very western-oriented approach. if all peoples of the world shall start settling scores in sports again, the idea of world championships, olympics etc shall soon collapse.

Think of the difference in hardship between those two events and decide which one you would prefer happened to you. Maybe it doesn’t make a big difference, but it’s worth a try

Wars happen almost every year on the planet. If we use sports to solve all the problems, then all sporting events won’t hold well.