Picks: Phelps and Lochte Gunning for World Records in 200 IM 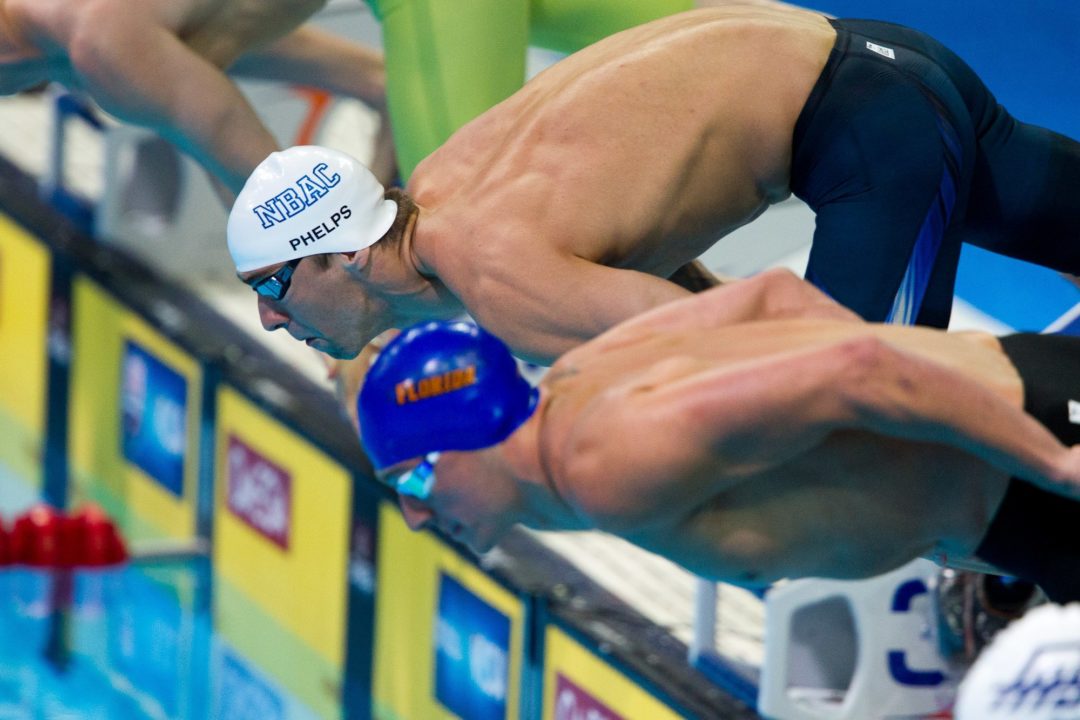 Replace the caps with American flags, and you'll have the scene for gold in London (Photo Courtesy: ©Tim Binning/TheSwimPictures.com)

But one of the clearest picks in the meet is counteracted by one of the most daunting decisions: which one will win.

Lochte won by just over a tenth at last year’s World Championships. Phelps won at Trials by less than a tenth. It’s a very well-balanced rivalry.

I’m going to make this simple. I think both are outstanding swimmers. Logic, however, has to put Phelps as the favorite. I fall into the school of: “if Phelps was that close (.16) last year when his training was inconsistent, how could he not be able to make up the difference after being so focused?”

But this race could still go either way. Lochte’s butterfly and walls seem very much improved from last season; Phelps’ breaststroke and his closing freestyle kick will be faster than they were in Shanghai. A World Record will definitely go down in this race.

The eyeball test from Trials runs counter to what the numbers say should happen though. Neither exerted all that much energy, but Lochte looked much easier than Phelps did.

Knocking the scales back in Phelps’ favor, though is the Lochte double – this race will come after the 200 back, which he didn’t have to deal with at Worlds. That’s where the imbalance will land – Phelps is the pick.

There’s a lot of swimmers who will fight for the bronze, and that includes tough-luck Laszlo Cseh, who happened to be one of the best swimmers in history that got stuck in the same events as the best swimmer in history. That resulted in three silver medals in 2008 in Beijing, including in this 200 IM. He was outstanding, across-the-board, at the European Championships in May, but he’s a guy who’s always shown the ability to space out two meets of big swims two months apart like this.

It will be a heavyweight battle, however. Brazil’s Thiago Pereira is back training in his native Brazil, where he has been up-and-down, but for the most part has thrived. Coming into this meet, we can’t assume that he needs a big lead over Cseh to hold on for the bronze like he has in the past. He’s shown that he’s clearly broken from his old, bad habits of collapsing on the freestyle leg. Does he still need a lead on Cseh at the final turn? Probably, but not as big as he did before.

Germany’s Markus Deibler is still very young, and keeps getting better-and-better. After getting bounced in prelims at Worlds last year, he should final this year. Britain’s James Goddard doesn’t have a weakness in his race, and despite turning 29 in March is still seemingly getting better. Another aging swimmer, Markus Rogan, was 5th at Worlds last year, and could still have his best days to come in the IM after shifting his focus from the backstrokes fully in the last few years.

This 200 IM is going to be another outstanding race on the women’s side of the meet (there are many, many of them this year).

The defending World Champion is 16-year old Ye Shiwen from China, who despite being so young has already been blistering times – including a 2:08.90 last year. She certainly hasn’t slowed down this year at the ripe old age of 16, but many wonder how much faster she can possibly get.

While it’s unlikely that she’s going to drop time every year between now and say, when she’s 25 or 26, I don’t think she’s maxed out yet. With such a dynamite closing freestyle leg (29.42 – almost a second faster than anyone else) she went from 5th to first. Obviously, she can’t go all-out on the first 150 and still expect to close that fast, but there has to be spots where she can improve by maturing and getting stronger. Her freestyle and probably her backstroke are the only legs that seem max’ed out. One would imagine she could drop half-a-second on her breaststroke without detrimenting her overall time too much. If she’s within a second-and-a-half of the lead (about a body-and-a-quarter length) at the last turn, it’s game-on.

The two Australians – Stephanie Rice and Alicia Coutts have both broken 2:10 already this year; Rice looked great in winning at Aussie Trials in the world’s best time, but still isn’t fully over her shoulder issues. A lot of people were surprised at how well she swam in March, even with that injury, so if she can battle and do it again a medal could still be in her future.

Caitlin Leverenz had some magic going between NCAA’s and shortly after; she swam a 2:09.71 in March, but wasn’t as good at Trials. Maybe that means she took a gamble, based on the timing of NCAA’s, that she could make the squad without being fully tapered in Omaha, knowing that another taper in such a short period would spoil her medal chances.

Either way, she seems to have hit the point where she’s overtaken Ariana Kukors as the top American (though Kukros’ breaststroke looked amazing at Trials), and with Kukors taking bronze last year, that could mean the same or better for Leverenz.

Katinka Hosszu didn’t have a great summer in 2011 almost across-the-board, though that seemed to be by design as she geared-up for the Olympic year. She’s now in much better physical condition, and that showed when she destroyed the 400 IM record at NCAA’s. I think she’s got a better shot at gold in the longer event, but she’s definitely a 2:09 at least in this race as well. Remember that Leverenz won the 200 this year over Hosszu, and is a bit younger. Great Britain’s Hnnah Miley would seem to have a better run for the 400 than this 200 as well.

Spain’s Mireia Belmonte is trying to be a marathon-woman again. That hasn’t worked out so hot for her since 2010’s World Short Course Championships, where she really became famous. She didn’t have a very good final meet headed into Olympic camp, which is never good headed into a big meet.

A few swimmers with outside shots include Hungary’s Evelyn Verraszto, who is the same age as Hosszu; and Great Britain’s Sophie Allen.

One very peculiar entry in this event come from China: Li Jiaxing, who swam this event at the Beijing Olympics, but was no better than 2:15 in either 2010 or 2011, somehow talked her way onto the Chinese Olympic Team with a 2:13.17 at Trials, only third-best in her country. There must have been a reason that the Chinese coaches selected her, so keep an eye on her results.

Kirsty Coventry is worth a mention; her health issues haven’t seemed to hamper her much in recent results, at least not as much as her break from the sport in 2010 did. She was the first swimmer out of the final at Worlds, but is the defending Olympic silver medalist.

Remember that 2008 (and 2011 Worlds) finalist Julia Wilkinsonfrom Canada chose to drop this event, even after qualifying.

Here’s our top 8 picks, along with their seed times.

“Knocking the scales back in Phelps’ favor, though is the Lochte double – this race will come after-” the 200 back. It’s a silly mistake but not having the schedule imprinted in my head (or the palm of my hand), I was wondering “is it the 200 breast or free, no, it must be 200 back”. Although I have to add, I’m still not sure (definitely not the breast).

And on the women 200IM- Rice, imho, the best technique in all her strokes. You can’t appreciate that in the shorter race but in the 400, it’s great display of stroke mastery 🙂 It could be because of the problem with her shoulder.

She still seems to be having trouble with her shoulder, based on her tweets, but I still put her to win medals in both 200/400 IM.

Good catch. This race will come after the 200 back. Thanks for pointing it out!

On the women’s side, I disagree that Kukors breastroke looked good at Trials….Check her splits from last summer to this summer….slower, much slower on back and breast!!!

Katinka has 2fly finals before 2im semis or such. i think she might not swim the 2im and put her egss in the 4im and 2fly.

200 medley we will see probably 3 races