Picks: Lochte and Phelps, Together at Last, in 800 Free Relay 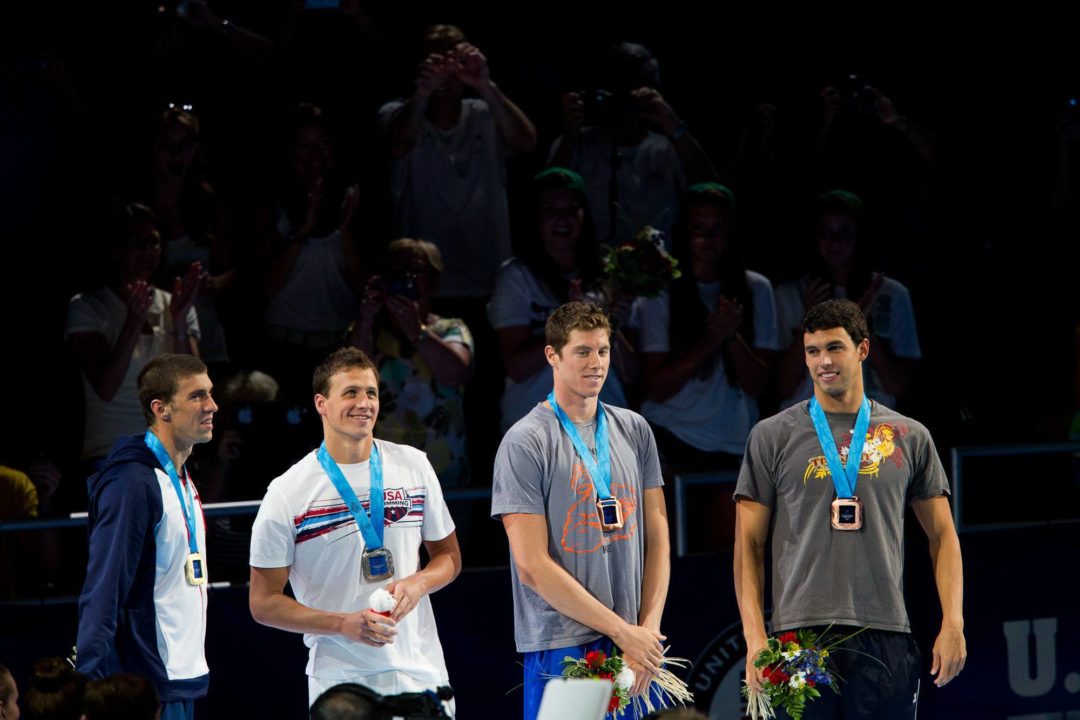 With Ryan Lochte and Michael Phelps on either end of this relay, whoever ends up between them need only do their role to ensure gold (Photo Courtesy: Mike Lewis/OlaVistaPhotography.com)

And here is the last of our Olympic previews. Starting Saturday, all of the questions will be answered, but for now one last shot at speculation.

To see all of our race-by-race previews, check out the category page. Take advantage of your last chance to participate in our Pick ’em contests, both for relays and individuals, by clicking the links in the upper right-hand corner! Lots of prizes to be given out from SwimOutlet.com’s Team Division.

By this point of the meet last year, Phelps was pretty tired and was about a second off of his flat-start time. Lochte had worn down a bit too, though he still swam pretty well on the anchor. At the Olympics, though, the final comes on day 4, two days earlier than it does in the World Championships schedule. This relay still comes at the end of a session where Phelps has the 200 fly final, though. With Ricky Berens swimming very well, this squad should be able to at least repeat their 7:02 performance, though maybe not beat it by much. The Americans have tough choices to make about who to make their 4th leg in finals: Peter Vanderkaay has been a fixture, but didn’t even final at Trials. Not much of an indication yet, but we’d expect a full four-swimmer swap, with Vanderkaay on the finals squad (assuming he looks fit in his 400).

Breakdown: This relay has gotten extremely deep in the last two years, becoming more similar to their 400 free relay counterparts. The difference now is that the French have a big leadoff in Yannick Agnel who can hang with anyone in the world, even the Americans’ Michael Phelps. They’re still missing that second piece (nobody can contend with America’s 1-2 punch, just like in the women’s 800 free relay), but the French shouldn’t have too much trouble grabbing silver.

Breakdown: This Chinese relay went from possible gold-medal contenders to a point where they now going to have to fight just to stay on the podium. Zhang Lin and his 1:46.1 – off the team. Wang Shun and his 1:47.0 leadoff – not listed among 5 relay members. It’s a very young relay, all four finalists could be 20-or-younger, so they always have that potential “pop” factor. Sun Yang needs to find his legs early and often in this race.

Breakdown: With a Paul Biedermann leading off Germany’s relay, they can at the least be guaranteed some good air time and a little bit of hype from the television announcers. But even with Biedermann (for now) being better than what China can throw, they’ll have trouble finding three other legs who can hold on and carry this team to a medal. Clemens Rapp and Dimitri Colupaev give them some new options, with a pair of 1:47.5’s at German Trials, and with Benjamin Starke seeming to focus more on the shorter 400 free relay, Tim Wallburger probably gets the 4th spot.

Breakdown: The fastest swimmer in 2011 on this relay at Worlds was Kenrick Monk. When a relay’s fastest swimmer is being sent home early from the Olympics, it’s never a good sign. Others can be better though. Thoms Fraser-Holmes has had a personal revolution in his swimming since then. Ryan Napoleon is swimming much better this year than he was last. Cameron McEvoy is a big young talent, and David McKeon has swum very well. The Australians have some options here, though it doesn’t seem like they have enough of an anchor (or leadoff in the modern age of swimming) to contend with the four squads ahead of them.

Breakdown: The Brits’ top two, Renwick and Lloyd, are swimming much better than they or anyone else on the British relay did last year. With Carry and Davenport filling in around them, this relay is probably better than the 7:10 they went last year, but not good enough to catch the Aussies.

Breakdown: This relay’s success will depend on the willingnness of its athletes to swim prelims. If they make it to the finals, with the above foursome they could do some damage. But it would be somewhat of a risk, because if these guys do swim prelims and the relay comes up short, it will negatively affect many other individual races. Sebastien Rousseau is the key to this relay, if he can split in the 1:47 range as well, the South Africans could jump the Brits.

Breakdown: Takeshi Matsuda didn’t put much into this relay last year, and it’s hard to blame him with so many other races to focus on. He’s the key to Japan moving up the rankings, though. It will be a tall order for him coming off of the 200 fly final, though, and unlike Phelps without much to swim for other than “pride” of a 7th place finish. Japan seems to have left Shogo Hihara off of the team this year; he was their fastest swimmer both in prelims and finals of this relay last year. That could sink their ship.

Get that relay to the top of the top ….and let`s Cheer for Usa

PVK , out of the relay ….space for the new guys ! Period > Houchin , Berens or Dwyer and Mc Lean or any other options are available . So easy to seeee that fact

You seem to have used 2011 times exclusively for the US. Berens was 1:46 at trials as were Dwyer, McLean, and Houchin. Vanderkaay won’t swim on the relay unless several people are off from their trials performances during the heats and PVK improves a lot in the 400.

I think you forgot russia

I was wondering about that too…

I agree. Russia is far more likely to final than both Japan and South Africa.

Who will be in the middle for the USA? I am assuming coaches will look at the 4 prelim 200 times plus Berens individual 200 race.

Remember there are 7 guys there for this relay and that doesn’t include PVK. Does he have to prove himself in the morning? Does someone get left off the relay and not swim at all?

Why would he not have to prove himself? Don’t get me wrong, i am a fan of PVK’s but he hasn’t done anything this year that has earned him unequivocal inclusion on that relay. You have 3 guys within .2 of each other and he’s not one of them. Unless he had an incredible TT, I dont see him in the mix. If that had been the plan, we bring Tarwater.

I agree that he needs to prove himself! Either way, in order to use all qualifiers, Berens, Lochte and Phelps all get a free ride to finals? Therefore one of 4 prelim swimmers gets on relay at night! No problem with that. What happens if Berens is slightly off his game in individual 200? What happens if PVK goes 3:45? If the top 3 don’t swim prelims, is the USA still for sure in the top 8? (i think yes and easier than the 400 free relay). I guess this is why these coaches get the big bucks!!!

I like Australia’s chances to upset and win a bronze. Three of their swimmers, Fraser-Holmes, McEvoy and McKeon are still young and are improving rapidly.
China is shaky this year without Zhang Lin.