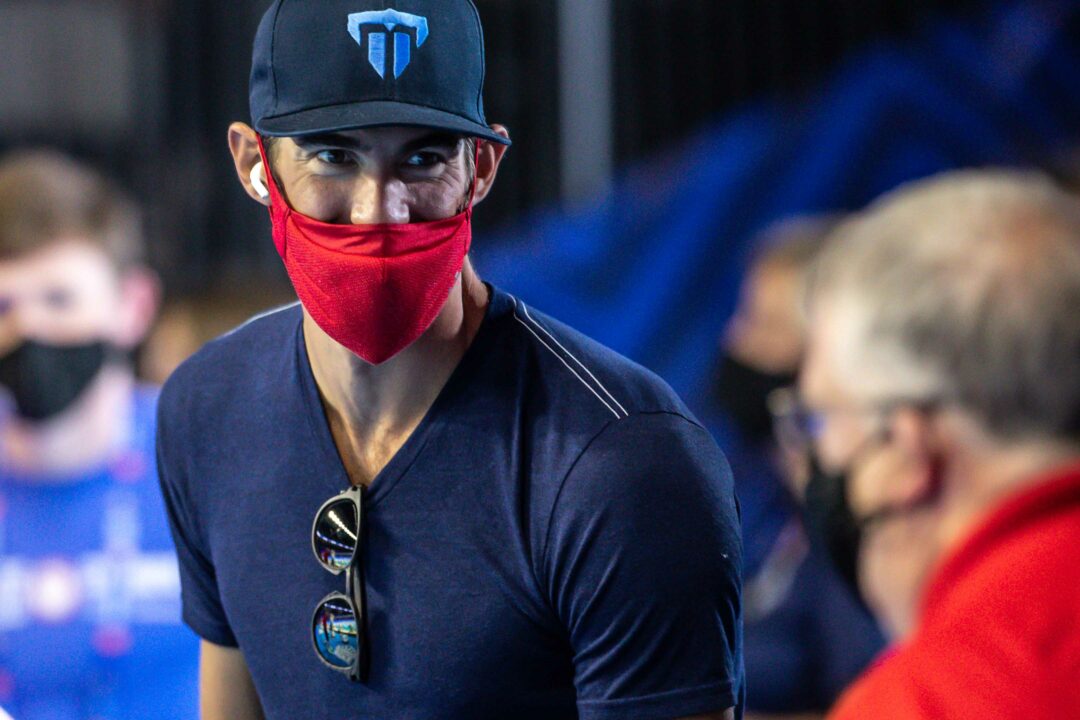 Michael Phelps spoke in a press conference Tuesday night, walking through his thoughts during the first Olympic Trials he has not competed in since 1996. Current photo via Jack Spitser/Spitser Photography

Five-time Olympian and 23-time Olympic gold medalist Michael Phelps is not competing this time around, however, he is an ever-present force at this year’s U.S. Olympic Trials.

He took part in a conference call Monday night. Media looked to him for his opinions on the meet so far and seeing young talent rise up in his events, picking his brain for his wealth of swimming knowledge and experience.

There was some fun too, though. While he has affirmed he is not planning a comeback, he was toying with the idea of hopping in for a time trial this weekend.

“Body-wise, I’m almost ready,” Phelps said. “Put me in there, let me do a time trial or something! This is all I know and all I’ve really understood.”

After Chase Kalisz won one of Phelps’ signature events, the 400 IM, Phelps was right there on deck to give him a hug. Phelps took home gold in this event at the 2004 and 2008 Olympic Games. He broke the World Record first in 2002, taking down Tom Dolan‘s record, and continued to break his own record from then through the 2008 Olympics. His WR of 4:03.84 still stands.

Phelps has attended both prelims and finals the past two days, often with his wife Nicole and 5-year-old son Boomer. During the conference, Phelps explained how returning to Trials as a retired athlete has been for him. “It was overwhelming the first night, but in a very positive way,” he said.

“I  will say it got a lot of things fired inside of me … It was probably more emotional than I thought,” Phelps said.

He was excited to see Ledecky in her element in the 400 free final that night. “The greatest female swimmer of our time, ever,” he called Ledecky. “Being able to see her live in action tonight in her 400, bread and butter. Especially after Ariarne has been. swimming as well as she has … it’s electric.”

But he does not miss everything about competing. “It’s fun to not deal with those nerves and have to feel that pressure going up to the blocks,” he told reporters. “Going through the warmup and warm down, the lactic (acid) testing, the massages – I don’t miss that, not at all.”

Phelps had another interview last night with Rowdy Gaines and Tirico, post-finals, where they offered the idea of Phelps coming back on Tuesday to call the 200 fly, the event he won Olympic gold in 2004, 2008 and 2016 plus silver in 2012.

The 2021 U.S. Olympic Trials is the first Trials that Phelps has not competed at since 1996. He started his Olympic career at 15 years old, and officially retired after the 2016 Rio Olympics. He went from making finals in 2000, but missing the podium, to bringing home six gold medals in 2004. Four years later, after he’d taken down multiple Word Records, he won eight gold medals at the 2008 Beijing Olympics.

If you’re being geo-locked from watching the video below, you can watch it here.

Eric the eel is the GOAT

9
-1
Reply
There's no doubt that he's tightening up

Can we start a petition for Phelps to time trial 400 Free?

The fact that he knows about Ariarne….. Phelps are you snooping around swimswam? Maybe it is also the swimmingstats instagram account.

It is in the general news…

Why does it say he hasn’t competed since the 1996 Olympic Trials? Wouldn’t he have been 11 years old at those trials? Should it say 2000?

1996 was the last time he DIDN’T compete at Trials…

There are plenty of SwimSwam readers who aren’t native English speakers as well as younger native speakers who are still figuring out some of the intricacies of English.

“Since” can be used in a few different ways in English. Native speakers don’t realize how complicated the use of “since” can be: it can mean different things depending on how it’s used, including what verb tense is used. The most common use is the one SwimFan is thinking about: “He hasn’t competed since 1996,” meaning 1996 was his last competition. “This is the first Trials Phelps hasn’t competed at since 1996,” meaning 1996 was the last Trials at which he didn’t compete.

In a theoretical time trial scenario, there’s no chance Phelps is doing a 400free, but how funny would it be if the almost 36 year old, 5 years retired legend that never focused on the 400free went like 3:44?

hahaha, what’s this beef about