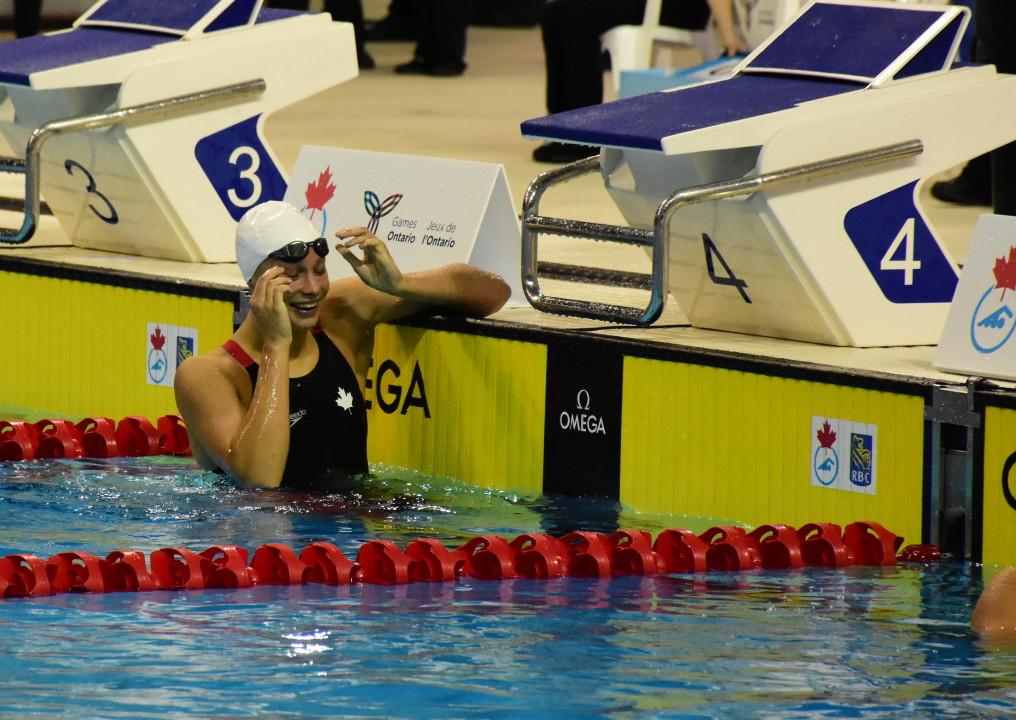 Canadian Penny Oleksiak broke her own world junior record in the women's 100 free, tying for the gold medal. Archive photo via Jim Snow

For the fourth time this week, Canada’s Penny Oleksiak has broken a world junior record. But this was bigger than that. Oleksiak tied for the gold medal, winning her fourth medal of the Games and the first by a Canadian swimmer in 24 years. It’s also Canada’s first here in Rio.

In a loaded women’s 100 free final Oleksiak, just 16, turned 7th. She appeared to be out of the conversation for gold, nearly a full second behind Australian world record holder Cate Campbell just halfway through the race. But a medal wasn’t out of the question yet, due to the incredible closing speed she’s shown. She had the fastest back half of anyone in the semi-finals at 26.93.

She didn’t even come back as fast tonight – back in 27.00 – but it didn’t matter, it was still the fastest back 50 in the field by a wide margin. She touched first in 52.70, along with American Simone Manuel, to win gold and break her previous world junior record of 52.72 from the semi-finals.

Campbell shockingly faded to 6th, leaving her, the world record holder, and her sister Bronte, the 2015 World Champion who was 4th, off the podium.

Oleksiak and Manuel also tied for a new Olympic record, going 0.01 faster than Campbell did last night in the semis. They also move into a tie for 7th fastest all-time in the event.

This is Oleksiak’s fourth medal of the Games, and she’ll have another shot in the women’s medley relay where the Canadians have a shot at second or third behind the favorite Americans.

She did the same in the 100 fly – the reactions have been priceless! So awesome!

(And since I’m Canadian I have to add – go Canada!)

Wow! I’m dazzled by Penny Oleksiak. I try to keep an eye out for great young swimmers. For example, I’ve been following Kyle Chalmers and Tamas Kenderesi for a while. Oleksiak really slipped under my radar.