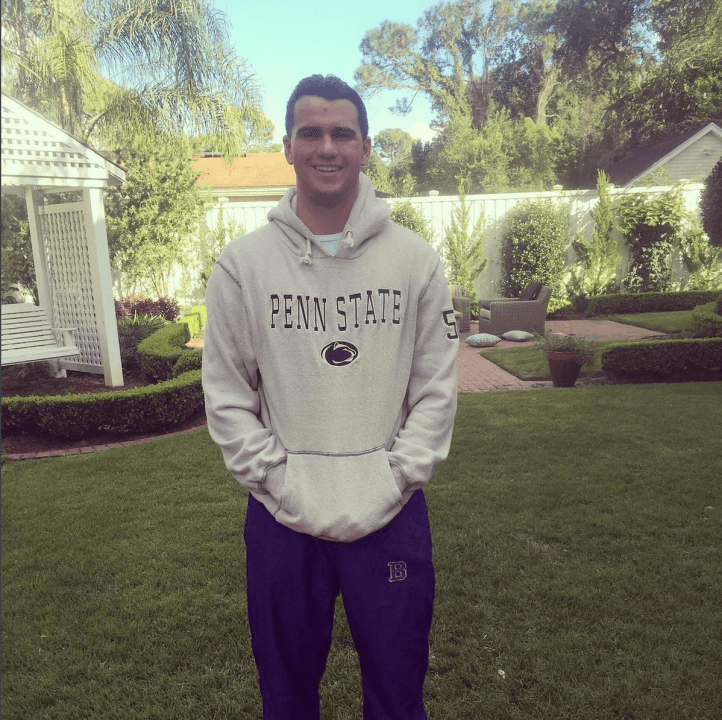 Wiley Watson of the Bolles School Sharks has given his verbal commitment to the Penn State Nittany Lions. Watson’s Top... Current photo via Wiley Watson

Wiley Watson of the Bolles School Sharks has given his verbal commitment to the Penn State Nittany Lions.

Watson’s not ready to score individually at the B1G Champs, where it took a 45 low in the 100 and a 20 low in the 50 to make it back in C finals. He worked through shoulder surgery prior to his junior year, yet returned to the pool and managed to pop out best times in the 50 and 100 free. His improvement curve is only further legitimized by the fact that last summer was his first time seriously training and competing in long course, and he’ll get a full additional year now to train post-surgery.

The Nittany Lions are working to build back up their sprint group after losing their top two guys, Shane Ryan and Nate Savoy. Ryan is training in Ireland in his attempt to make the Rio Olympics under the Irish flag, though he said he’d return to finish his final year of eligibility next fall. Regardless, Penn State is lacking in sprint depth this season, and Watson will add some bulk to that part of their roster, especially if he continues to improve as he has over the last couple seasons.

I committed to Penn State because I instantly fell in love with the school, campus. location, and of course the team. The team had a sense of brotherhood and loyalty. They were all one big family. Very similar to how I am with my teammates at Bolles.

Congrats Wiley! It has been great to work with you over the last year. Go Bolles!