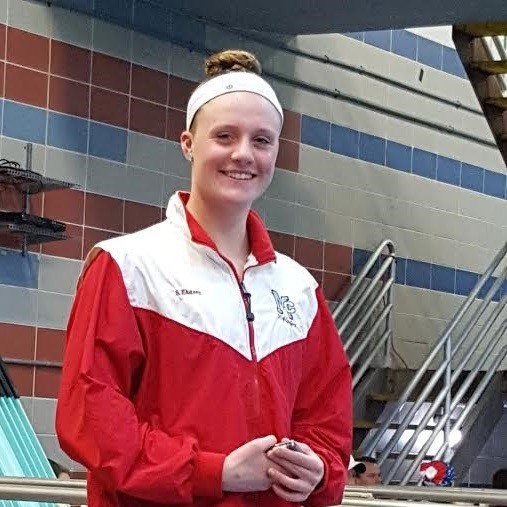 McLean's Sinead Eksteen broke the regional record in the 200 free of U.S. National Teamer Cassidy Bayer, who missed the meet with a knee injury. Archive photo via Matt Rees

Shortly before the start of Saturday night’s Northern Virginia regional 6A championship meet, the public address system pulsed with the Smash Mouth classic, “All Star.” It was a fitting choice, given the star-studded cast that was competing before the high-energy capacity crowd. And the performances didn’t disappoint – six regional records fell, and virtually every race delivered head-spinning times, affirming Northern Virginia’s identity as one of the most competitive regions for high-school swimming anywhere in the country.

Depth was the difference for the team titles. Among the boys, Patriot High School prevailed over second-place Oakton, despite just one relay victory and no individual victories. Similarly, James Madison won the girls title, with no relay or individual titles.

The meet started with a bang, as Patriot’s 200 medley quartet – Will Cumberland, Spencer Rowe, Cole Cooper, and AJ Ross – motored to a three-second victory and their 1:31.78 broke the regional record they’d set at last year’s meet. The Chantilly girls – Elise Mozeleski, Jacquee Clabeaux, Lea Gwennap, and Lauren Young – followed with a regional record of their own, winning in 1:43.37.

In the meet’s first individual event, Lane Stone, a senior from West Springfield, and a Virginia Tech commit, blazed to a win in the 200 free, 1:37.81. For the second consecutive year, Stone also prevailed in the 500 free, winning by close to seven seconds and delivering an automatic All-American time of 4:24.31. In an interview following the meet, Stone talked about his races and what’s next for him in swimming.

In the girls 200 free, an untapered Sinead Eksteen of McLean broke a regional record held by Cassidy Bayer (who was sitting out the meet because of an injury), going 1:46.91, and returning later in the meet to also win the 500, going 4:45.44 and just missing the regional record held by Megan Byrnes, now a freshman at Stanford. Eksteen was pushed by Langley senior Isabella Rongione, a USC commit, with the two swimming side-by-side before Eksteen pulled away in the final 100, splitting 57.15. Just a junior, Eksteen will be one of the prized recruits in the class of 2018. In an interview, Eksteen talked about her swims and her training.

Another standout junior, Casey Storch from Langley, won the 200 IM for the second year in a row, delivering a 1:48.95. In the girls 200 IM, Lea Gwennap, a University of Pittsburgh commit, took a big lead during fly and never looked back, finishing first in 2:00.46. In an interview, Gwenapp discussed her swims, how she gets psyched up before her races, and what she likes about swimming.

A pair of Virginia Tech commits won the 50 free – Tommy Hallock of Oakton (20.63) and Emily Meilus of Herndon (23.60). Hallock also won the 100 free and set a new regional record in the process (44.58). On the anchor leg of the 200 free relay he set the large Oakton contingent on fire with a 19.79 split. He then came back later and did the same in the 400 relay, uncorking a 43.74 split – the fastest in a fast field by more than 1.5 seconds. In an interview, Hallock talked about his individual swims and what he’s looking forward to at Virginia Tech.

Meilus windmilled her way to victory in the 100 back, going 55.00, and in an interview she talked about her meet prep and why “Regions” is one of her favorite places to compete. (Not to be overlooked in the 100 back was the swim by Anna Redican of South Lakes in Reston. Just a freshman, she finished second in 55.77.)

Among the boys, the big winner was another Herndon senior, Christian Ginieczki, an Auburn commit, who finished in 49.15.

Sam Pomajevich, a senior from Stonewall Jackson and a University of Texas commit, won the 100 fly in 48.26, and broke his own regional record in the process. Another standout, Lexi Cuomo of Centreville, won the 100 fly for the second year in a row, 54.48, and took second in the 50 free, losing to Meilus by just .01. Just a sophomore, Cuomo also powered her 200 free relay to victory, rocketing through the pool in 22.75 on the anchor leg.

In the 100 breast, Dorje Wu, a McLean senior, and Yale commit, won the 100 breast for the second consecutive year, going 55.18 (breaking the regional record he’d set last year), while Jacquee Clabeaux of Chantilly, a North Carolina State commit, won in 1:01.76, holding off Anna Keating, a freshman standout who nearly closed a one-second deficit at the 50, finishing just behind Clabeaux in 1:01.82.

The meet concluded with a fierce battle in the 400 free relay between Chantilly and James Madison. Virtually tied at the 100, James Madison’s Madeline Kuhlkin pushed them ahead with a speedy 51.75 split, and Julia Downing held the lead, but Clabeaux was too much, splitting 51.18 and powering Chantilly to the victory.

Too bad Cassidy Bayer got injured. Was looking forward to her putting up some fast yard times at this meet. Hope her recovery is going well.

She’s back in the water and was walking around on deck last night without a brace or anything, and from what I’ve heard she’s been recovering well

Any idea when the VA State meet takes place? Or is it just a North VA championship with no state championship? Too many different formats for each state’s hs to keep up with.

The 6A competition is on Feb 17 at George Mason, with prelims in the morning and finals in the evening.