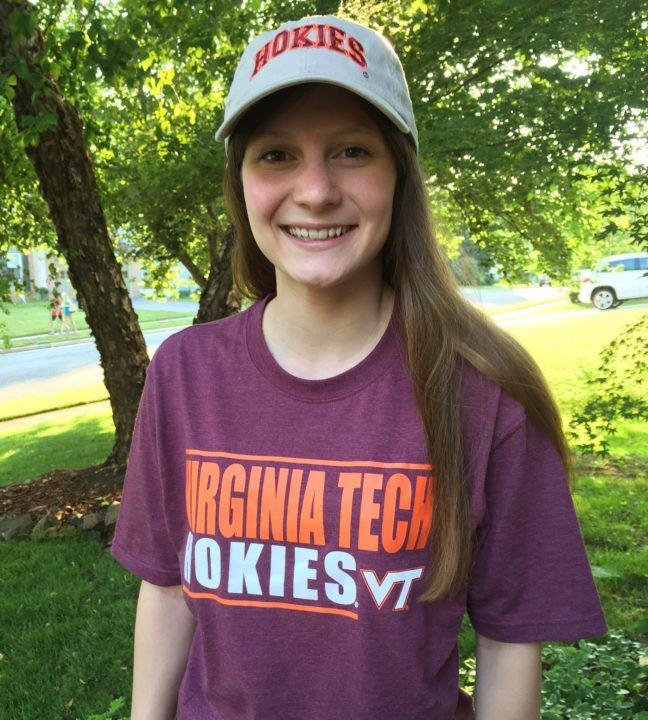 Emily Meilus, who swims for Herndon High School and Machine Aquatics, has made a verbal commitment to Virginia Tech's class of 2021. Current photo via Emily Meilus on Twitter

Double-event qualifier for the 2016 Olympic Trials (100 meter back and 200 meter back), Emily Meilus, has announced her verbal commitment to Virginia Polytechnic Institute and State University, also known as Virginia Tech. The future H2Okie wrote on her Twitter account:

“I am ecstatic to announce my verbal commitment to swim for Virginia Tech class of 2021. #GoHokies”

Meilus is a rising senior at Herndon, Virginia’s Herndon High School, and she also swims for Machine Aquatics. Meilus is the current Virginia 6A State record-holder in the 100 back following her 2015 state meet victory with 55.08. At the 2016 VHSL 6A Girls Championships, Meilus missed the top step of the podium in the 100 back by a mere .14, finishing second with 55.46. She was also fifth in the 200 IM (2:06.77).

Meilus’ best 200 back time would have landed her in the A final at 2016 ACC Championships, scoring sixth just behind future Virginia Tech teammate Klaudia Nazieblo. While her 100 back time wouldn’t yet earn her a second swim, Meilus will be called on to be a replacement for Holly Harper and Auriane de Premilhat, both of whom scored in the 100 back at ACCs and both of whom will have graduated by the time Meilus shows up in Blacksburg in the fall of 2017.

Way to go Emily! Keeping it in the ACC!