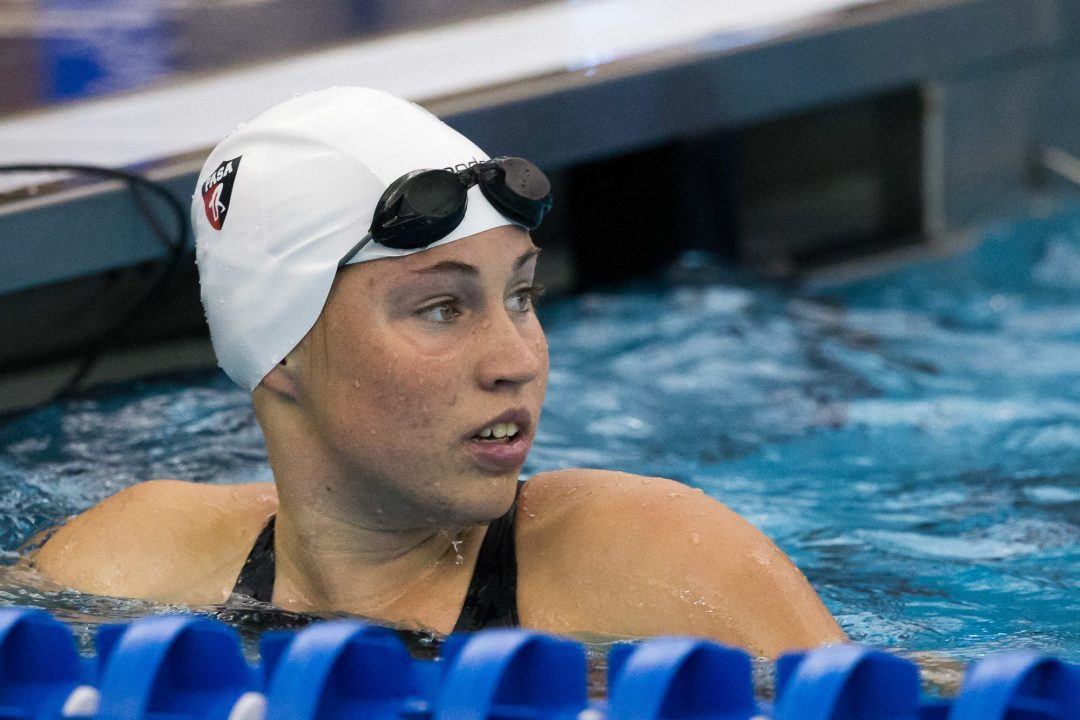 PASA's Jennifer Campbell has signed her National Letter of Intent to swim for the Cal Golden Bears. Archive photo via Tim Binning/TheSwimPictures.com

The focus of the Cal Golden Bears’ women’s recruiting class is centered around the fact that they have signed four out of the top five ranked recruits in the country. Flying more under-the-radar, though, was the addition of one of the best pure middle-distance freestylers in the country, Jennifer Campbell, who is also an NCAA-qualifying-caliber swimmer.

Campbell will serve as a replacement for the soon-to-be-graduated Cal seniors Catherine Breed and Caroline Piehl, especially in supporting the Cal 800 free relay. Though she’s not quite as good as Breed in the mile, she’s a great match to Piehl as a very good 100-500 freestyler and an above-average butterflier as well.

Campbell has also been 2:02.21 in the 200 meter freestyle. That time was done at the 2014 Santa Clara Grand Prix, and therefore is just outside of the Olympic Trials qualifying period, but if she repeats the time next summer she’ll be qualified for Omaha.

The Cal women won the 800 free relay at NCAA’s last season with four underclassmen, but two of them (Piehl and Missy Franklin) will be out of eligibility by the time Campbell arrives on campus. That should leave her in the position to contribute immediately to Cal’s relay at the NCAA level, though even among her classmates there will be big competition for those spots.

What this now gives to Cal coach Teri McKeever is a luxury she’s enjoyed for years: she has the opportunity to use any number of different combinations in this 800 free relay and prevent any of her stars from becoming overloaded with races at NCAA’s without sacrificing points.

Congratulation Jenna, your uncle is very proud of you.

Welcome to Cal!!!! Look forward to see you swim!

In addition to the five freshmen, Acker (another Gunn Titan/PASA alumna), Runge, Pelton, and maybe Ladd will contend for 800 free relay legs.

Teri can go into the next recruiting cycle knowing that she has to replace Pelton’s, Acker’s, and Bootsma’s individual points, but she’s already pretty much replaced their relay legs with the 2015 recruiting class.

Congrats and welcome to the Cal Fam!!!! This is a deep class!

Congratulations Jenna! You’ll be and awesome addition to the Cal program!!!!!