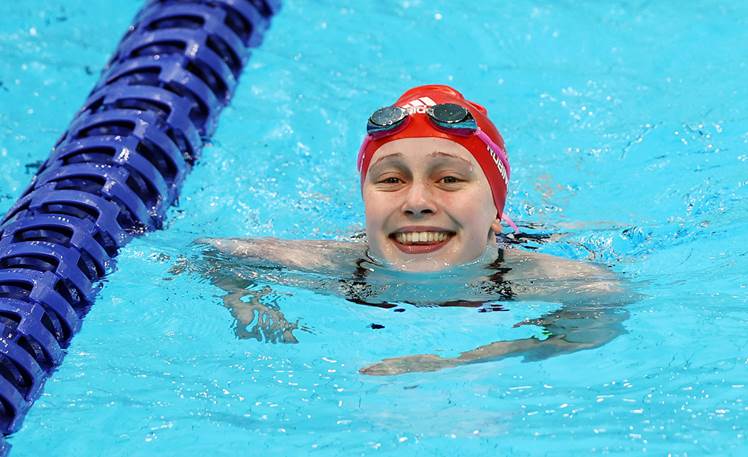 Robinson produced one of the standout moments of the Rio 2016 Paralympic Games when, at the age of 15, she flew to S6 50m Butterfly gold. Archive photo via British Swimming

29-time Paralympic medalist Jessica Long has been named to the US Para Swimming National Team for 2022, clearing the “A Standard” for top funding.

Paralympic and European champion Ellie Robinson is hanging up her goggles after announcing her retirement from competition in the wake of Tokyo 2020.

Robinson produced one of the standout moments of the Rio 2016 Paralympic Games when, aged only 15, she flew to S6 50m Butterfly gold – and there was also a bronze medal in the S6 100m Freestyle for good measure.

Those results came just months after the Northampton Swimming Club competitor had made her senior international debut, in the 2016 World Para Swimming European Open Championships in Funchal, when she secured a haul of four individual medals from five events.

Since then, the butterfly and freestyle specialist has become a staple of British squads at the sport’s biggest competitions. Robinson – who has trained under coaches Andy Sharp and Jacquie Marshall throughout her career at Northampton – claimed European S6 50m Butterfly gold in Dublin in 2018, after winning the same event on her Commonwealth Games debut a few months earlier.

There was a butterfly silver at a home World Championships in London in 2019, before her most recent medal moment – another S6 50m Butterfly title at the European Open Championships in Funchal in June.

Robinson was selected for her second Paralympic squad shortly afterwards, going on to place fifth in the S6 50m Butterfly final at Tokyo 2020. After that race, she provided a memorable poolside interview, when she passionately discussed the ongoing hip injury that she has managed and overcome to reach the Paralympics for a final time.

While the 20-year-old’s time in elite competition is at an end, her impact on British para-sport will continue.

On her retirement, Ellie said:

“Where do I begin? How about I just say… Swimming, you’ve served me well. Although your door may be closing, it will never be locked. I will forever be peering through to admire the beauty behind you.

“We’ve not always got on well. We’ve clashed countless times – but swimming, I can happily extend a hand and say ‘thank you. It was all part of your plan in the end. I should have never doubted you’.”

British Para-Swimming National Performance Director Chris Furber said: “It has been a pleasure to play a part in Ellie’s career over the past six years and watch on at all she has achieved, beginning with a British record-setting display at the National Paralympic Day event in London back in 2015.

“There is no doubt that, through her performances at two Paralympic Games and other major international competition, she has helped to promote para-swimming and also raise the profile of para-sport more generally.

“We wish her every success for the future and look forward to seeing what the next chapter holds for Ellie Robinson.”

Her post-race interview in Tokyo is 100% worth a watch https://youtu.be/fhmM8V9Y5Ok