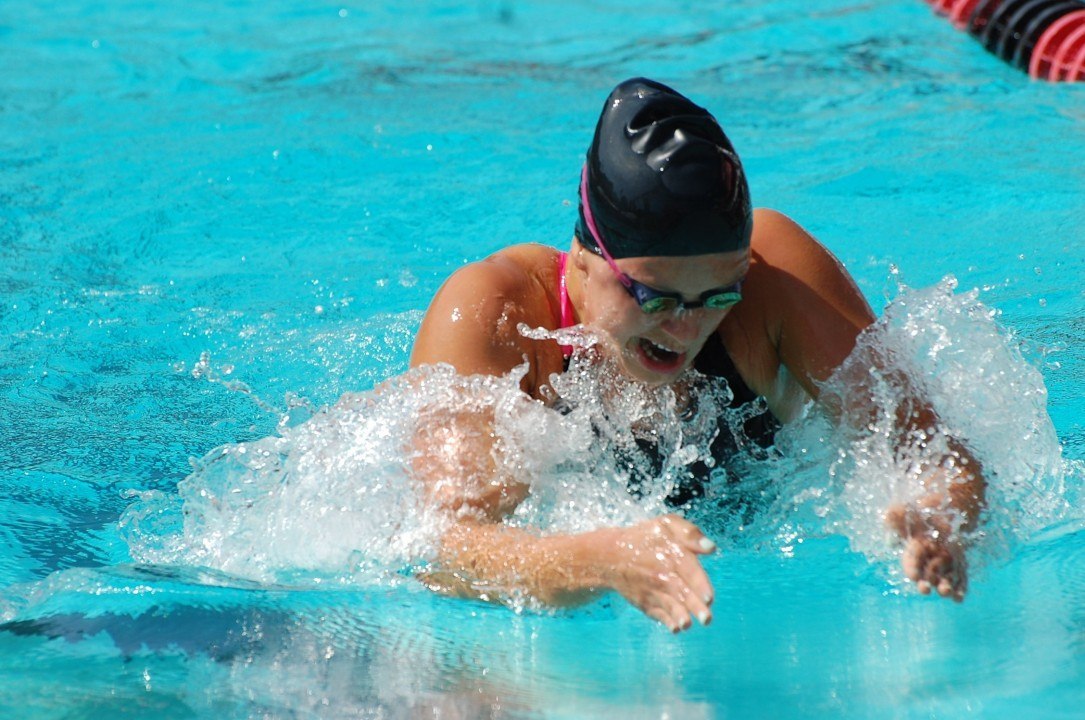 All the info you need to follow finals on Saturday at the 2104 Pan Pacific Para-Swimming Championships in Pasadena, California:

The 150 IM is an event for classes SM1-SM4. Swimmers compete in back, breast and free, omitting the butterfly. There were several disqualifications in prelims this morning so the ranks will have thinned for finals. The most notable races will be men’s SM3 in which Australia’s Grant Patterson, whose 50 back, and 50 and 200 frees all set Oceana records on Thursday and Friday, will be top seed by 21 seconds. Americans Michael DeMarco and Curtis Lovejoy will also be in that final.

After setting the S4 Oceana records in both the 50 free and 50 back over the last two days, Australian Ahmed Kelly is top seed going into tonight’s SM4 150 IM.

The SM5 final will consist of Haley Beranbaum of the US and Adri Visser of South Africa, who dropped 8 seconds in prelims.

The SM6 should be an exciting race. Vianney Trejo of Mexico had a superb prelims swim, dropping 6.3 seconds and leading the qualifiers for tonight’s final with 3:27.92. Trejo will be joined by Susana Ribeiro of Brazil who was a bit off her best time of 3:23 in prelims. Also within contention of the SM6 title is 18-year-old Reilly Boyt of the US. She went 3:37 in finals but her seed time was 3:28.

In the SM7 class New Zealand teenager Nikita Howarth came away from prelims as top seed. The 15-year-old went 3:06.34 in prelims although she was 6 off her best time. Canada’s Brianna Nelson and USA’s Cortney Jordan will be in lanes 5 and 3, respectively. Any of the three could take this final.

The top qualifier for the SM8 final is world record-holder Jessica Long of the US. Long set the record of 2:36.00 in 2012 and was only 4 seconds off that pace in prelims with 2:40.50. Challenging Long will be two 15-year-olds from the Land Down Under: Australians Maddison Elliott (3:00.47 in prelims) and Lakeisha Patterson (3:01.97 in prelims). Americans Brickelle Bro (17 years old) and Ahalya Letterberger (13, and in her first international meet with Team USA) are also in this final.

SM9 will feature Madeleine Scott of Australia (qualified with 2:45.67) and Katarina Roxon of Canada (2:48.28) in the middle lanes, with Team USA’s Hannah Aspden (14 years old) right there with them. Another teenager, Ashleigh Cockburn of Australia (15) qualified fourth.

Katherine Downie of Australia, who has had an excellent meet so far, is top seed in the SM10 class with 2:34.65, but only by 1/10: Canadian Aurélie Rivard qualified second in 2:34.75. Rivard’s teammate Samantha Ryan (15) dropped nearly 4 seconds in prelims to qualify third. Mexico should pick up quite a few team points here with three finalists.

Becca Meyers of the US, the newly-crowned world record-holder (subject to IPC ratification) in the 400 free S13, is up against teammates Colleen Young and Cailin Currie for the SM13 title. Meyers qualified in 2:33.29, about 3 off her seed time. The world record in this event is 2:27.64.

American Roy Perkins Jr dropped 23 seconds to qualify at the top of the SM5 class in men’s 200 IM. His 3:24.40 is a full 30 seconds ahead of the second-fastest seed going into finals, Argentina’s Ariel Quassi Sr.

Talisson Glock of Brazil went a best time of 2:48.43 in prelims to lead the field in the SM6 class. He will be joined in finals by Matthew Haanappel of Australia, who should give him a good race tonight.

Matthew Levy of Australia, who set Oceana records in the 50 free and 50 fly this weekend, is top seed going into the SM7 final. He went 2:41.13 in prelims, ahead of Jean-Michel Lavallière of Canada, Daisuke Ejima of Japan, and Lucas McCrory of USA.

The SM8 class should be a close contest between Australian teammates Jesse Aungles, who was 6.7 off his PB in prelims with 2:36.25 and Blake Cochrane, 2:36.92 (+6.9 from best time). Luis Andrade of Mexico, in his first international meet with Team Mexico, dropped 5 in prelims to qualify third in 2:40.07.

Canada’s Adam Rahier, who set a PanAm record in the 100 fly on Thursday, qualified first in the SM14 class. He will be joined in finals by Gordie Michie, 16, of Canada and Daniel Fox and Mitchell Kilduff of Australia.

Top seeds for tonight’s 50 back finals will be Breanna Sprenger of USA (S1), who dropped 5 seconds in prelims, Edenia Garcia of Brazil (S4) who comes in with 54.82, and Alyssa Gialamas of USA (S5) who leads the field with 49.66.

On the men’s side, Curtis Lovejoy is alone in S2. In S6 Brazil’s Talisson Glock will be back in lane 4 with the fastest prelim swim of 1:18.23. Canada’s Adam Purdy dropped 5.7 for 1:20.21 to earn a spot in lane 5. Matthew Haanappel of Australia will be challenging them both from lane 3.

In S8 it was USA’s Thomas Miazga with the fastest qualifying time, 1:12.84. Roderick Sewell dropped nearly 6 seconds and made it back fifth.

The fastest out of prelims in the S9 class was Robert Griswold of the US. He dropped 1.6 for a top time of 1:07.08. Brenden Hall of Australia will be challenging him; his 1:07.32 prelims swim was about 2 seconds off his best time. Jesse Reynolds of New Zealand will be in the mix as well with his 1:08.60 in prelims.

Australia’s Michael Anderson went 1:02.36 in prelims to lead the S10 qualifiers. Ian Silverman of Team USA went a PB by a full second to qualify second in 1:05.94. Canada’s Benoit Huot added 6 with his 1:06.74 prelims swim. Dalton Herendeen of the US should also be in contention for the title tonight.

Team USA captain Bradley Snyder was the fastest S11 out of prelims with 1:14.09. Argentina’s Ignacio Gonzalez Sr will be alone in S12. Charles Bouwer of South Africa and Tucker Dupree of the US should have a great race in S13 tonight; they qualified in 1:00.40 and 1:01.28, respectively.

In the S14 class, Gordie Michie of Canada’s prelims swim of 1:08.15 was just a touch faster than his teammate Adam Rahier’s 1:08.49, so he’ll take lane 4 in finals. Daniel Fox of Australia was top seed coming into the meet; he added 4.8 in finals to qualify with 1:09.19. This should be another great race.

GO USA GO LOVE ALL OF YOU