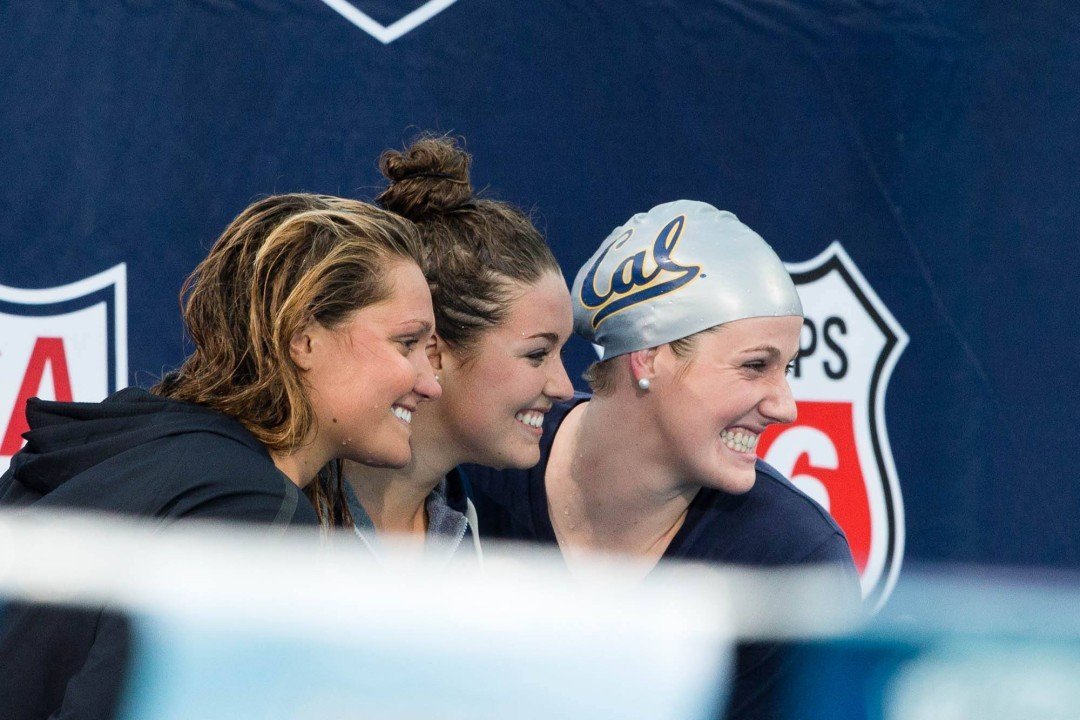 The Cal women will be battling among themselves in the backstroke races for spots in finals, but they'll have to deal with a bigger threat from the Australians in the evening. Archive photo via Tim Binning/TheSwimPictures.com

Note: Pan Pacs rules allow each country to enter as many swimmers as they want in prelims, but only two can swim in the A-final and a third in the B final. Keep that in mind as we will not pick more than two swimmers for a country in our top 6 picks.

The top of this race features the world’s two best women’s sprint backstrokers: American Missy Franklin and Australian Emily Seebohm. With Aya Terakawa’s retirement, those two should be the real contenders in the event.

The trick is that neither of them has been all that convincing this summer, and there’s a gaggle of swimmers behind them who, if they hit their tapers perfectly, could take the gold.

That includes two of Franklin’s teammates – and not just her Team USA teammates, but her training partners at Cal, Liz Pelton and Rachel Bootsma.

That “if they hit their tapers” is still a big question-mark though, as neither swimmer has been better than 1:00.5 this season, whereas Franklin has been 59.38 – and this was probably her best swim at Nationals.

With the fact that those three are training together, and that Franklin was at least a full second faster at Nationals than either, it would be hard to predict Franklin to miss her taper so badly with the other two hitting it so well.

The Australians’ second star is Belinda Hocking, who was a bronze medalist (59.93) behind Seebohm’s gold (59.37) at the Commonwealth Games.

Neither Hocking or Seebohm swam best times at that meet, and while the debate rages on as to how much Australia was focused on the Commonwealth Games versus Pan Pacs, that will be a deciding factor in the podiums here.

Given what Franklin did at U.S. Nationals, though, despite not being great in her other races, gives us hope that she will beat out Seebohm for gold for the third-straight year (2012 Olympics, 2013 Worlds).

Other contenders for medals from outside of Australian in the United States include Canada’a Brooklynn Snodgrass, though she’s got a better chance in the 200 at winding up at the podium. Her country mate Sinead Russell has been the better of the two in the sprint so far this year, and swam under a minute at the Commonwealth Games, but won’t be at Pan Pacs.

Japan’s two contributions to the final should be Sayaka Akase and Shiho Sakai. Sakai won this race at the Japan Open in June, but Akase swam very well at the BHP Billiton Super Sport Series in January in Australia, and at only 19 is on track to be the next big thing in Japanese backstroking – filling a massive void after Terakawa’s departure from the sport.

From outside of the four host countries, the most likely finalist is Brazilian 23-year old Etiene Medeiros. She swam a lifetime best of 1:00.77 at Maria Lenk in April, and has been making consistent improvements every year since medaling at the 2008 Youth World Swimming Championships.

Medeiros isn’t the tallest backstroker in this field at only 5’6″, but she has one thing working in her favor: the first is that she still hasn’t yet hit a wall; she has improved slowly-but-surely every year, and that’s a consistency that a lot of the young backstrokers in this field who can’t say that.  Whether or not Medeiros can make that best swim at this meet this year, rather than Maria Lenk, will make-or-break her finish.

The absence of Meagen Nay will be felt in this race, but that doesn’t make it a two-swimmer race. Elizabeth Beisel is only the third-seeded American in the event, but a bad slip on the start in finals in Nationals negated what looked like a really fast swim for the last 180 meters once she got up to speed. She and Liz Pelton should fight for a spot in finals.

Brooklynn Snodgrass is the defending NCAA Champion in the event, and even she isn’t necessarily going to final – three of her country mates, including Hilary Caldwell, are seeded ahead of her. The Canadians, if they were tapered for the Commonwealth Games, didn’t show it, so while they’ll have to deal with a very hard month of travel, they should be full-bore at Pan Pacs.

This race will almost certainly have an A-Final made up of two each from Canada, Japan, the U.S., and Australia. On the surface, that sounds like it would make for boring preliminary sessions, but each of those countries has three, four, or even five swimmers who could grab their two slots.

We’re taking the World Record holder Franklin, just because, but it’s not a high-confidence pick. This could be an opportunity for Hocking to score the biggest upset of this meet.

BK, I think you just wanted to add drama into a certainity 🙂

No way Franklin lose 200 back.
It was so clear Franklin was not tapered in Irvine, based on the fact that her 100s times were significantly better than her 200s. Also the simple fact that Franklin only had to qualify as a top four in 100/200 free to qualify for Pan Pacs.
Hocking had never won Commonwealth, and I am very certain she was fully tapered in Glasgow.

ASWIMFAN: “It was so clear Franklin was not tapered in Irvine, based on the fact that her 100s times were significantly better than her 200s.”

Good observation, as Missy seems to have confirmed from her Brisbane press conference yesterday when asked if she was fully tapered @ Nationals:

‘I wasn’t, no. I definitely think I’m going to be rested more for this meet, which would be nice. I had that 2 free 2 back double, and that took quite a bit out of me {laughs}…I was a little tired there, so…I have multiple doubles here too but I think it’ll be a little less intense than that one, and mostly they’ll be relays, and individual events which I love!’

Thank you for this conformation.
Good news for all Missy’s fans 🙂

Sinead Russell is not on the Pan Pac roster for Canada.

Not even putting Pelton in your top 6 for the 200 back is a complete joke. Rethink that one.

Only two per country can swim Pan Pac finals, so if Pelton is only third best American, she’s out of the finals, even if she’s 3rd or 4th overall best prelims time.

! – as was explained, and is explained at the top of the article, while Pelton may very well be one of the 6 fastest in prelims, our belief is that she will only be the third-best American and therefore not even be in the final.

Yes Braden, I read what you wrote. I am no fool. Beisel has been pretty off in backstroke and strong on IM. Pelton has been hyper focused on backstroke. Agree to disagree.

Braden has Beisel in his top six which means that Pelton can’t be. Each country is limited to 2 swimmers in the A final. Pelton may very well swim a top six time, although given her poor NCAA and long course season thus far she is no guarantee.

As a Cal and Pelton fan this is hard to type: Pelton has been off for about a year now. Bets are totally on Beisel (sans another slip) to beat Pelton by half a body length or more in the 2B.

Well, i think Seebohm will be back to the 58high range 100back and would want to disappoint @home. Ofcoz Franklin will be probably in the 58mid range and that should be enough for a win…. Anything below 2.07 will be good enough for a podium.. I agree with Aswimfan that Franklin was probably rested not tapered for Nats. Swimming with colorado stars was good for Missy in view of the altitude; her inseason times havent been so great but on taper she’ll be ok.. She’ll safely win both 100/200 double but most likely 100back will be a lot tighter than we think IMO

I want to see Spofforth’s record go down! She just got it because the suit… Missy or Seebhom will get it sooner or later!

Spofforth set that record in an LZR, not an Arena X-Glide or a Jaked. I wouldn’t chalk it all up to the suit.

those predicting very fast times and WRs must have not gotten the memo that the meet is in an outdoor pool and it is winter in the Southern Hemisphere albeit a mild winter like the one here off the southern and central California coast lines.

Thanos – Sarah Sjostrom swam a World Record outdoors and in Stockholm, where the weather is certainly less pleasant than a Gold Coast winter.

But, I tend to agree with you. I don’t think we’ll see much in the way of super-fast swims.

I’m less concerned about the weather itself than I am about the fact that outdoor backstroke is painful to watch (and even worse to swim). If it turns out anything like U.S. Nationals, it’s gonna be like bowling with the bumpers up.

LOL! Thanks, you gave me a big laugh with this comment! 🙂

I’m really excited to see what beisel can do ( without the slip of course)! What do you think her time will be at pan pacs?

Elizabeth Beisel has been looking great! What do you think her time at pan pacs will be?