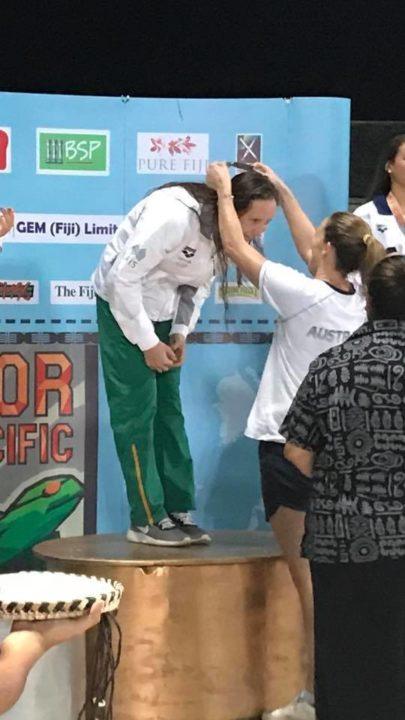 16-year-old Lani Pallister finished day 4 of the Australian Age Championships with a perfect 4-for-4 record in gold medals, thanks in large part to two wins on the fourth day. Archive photo via Ian Hanson

16-year-old Lani Pallister finished day 4 of the Australian Age Championships with a perfect 4-for-4 record in gold medals, thanks in large part to two wins on the fourth day.

Pallister has also won the 100 free and 400 free in the 16-year-old age group so far this week. She should also get a shot at the 800 free title later in the week.

At the opposite end of the distance spectrum, 17-year-old Kalani Ireland kept winning. The sprinter went 54.16 to win the 100 fly. He’s previously won the 100 back and 50 free at this meet with remarkable versatility.

Mollie O’Callaghan is another triple winner after Thursday’s sessions. O’Callaghan swept the 50 and 100 frees over the first three days in the 15-year-old division, and today went 1:01.05 to pace the 100 back by more than a second and a half.

Other repeat winners on day 4:

You can see full-session race videos below:

He’s at a poor age cycle, probably to young for Tokyo unless his times drop & the next Olympic cycle will be when he is 21. However he shows great prospect.

Could make a huge splash at junior world championships . Like Mack Horton did in 2013.