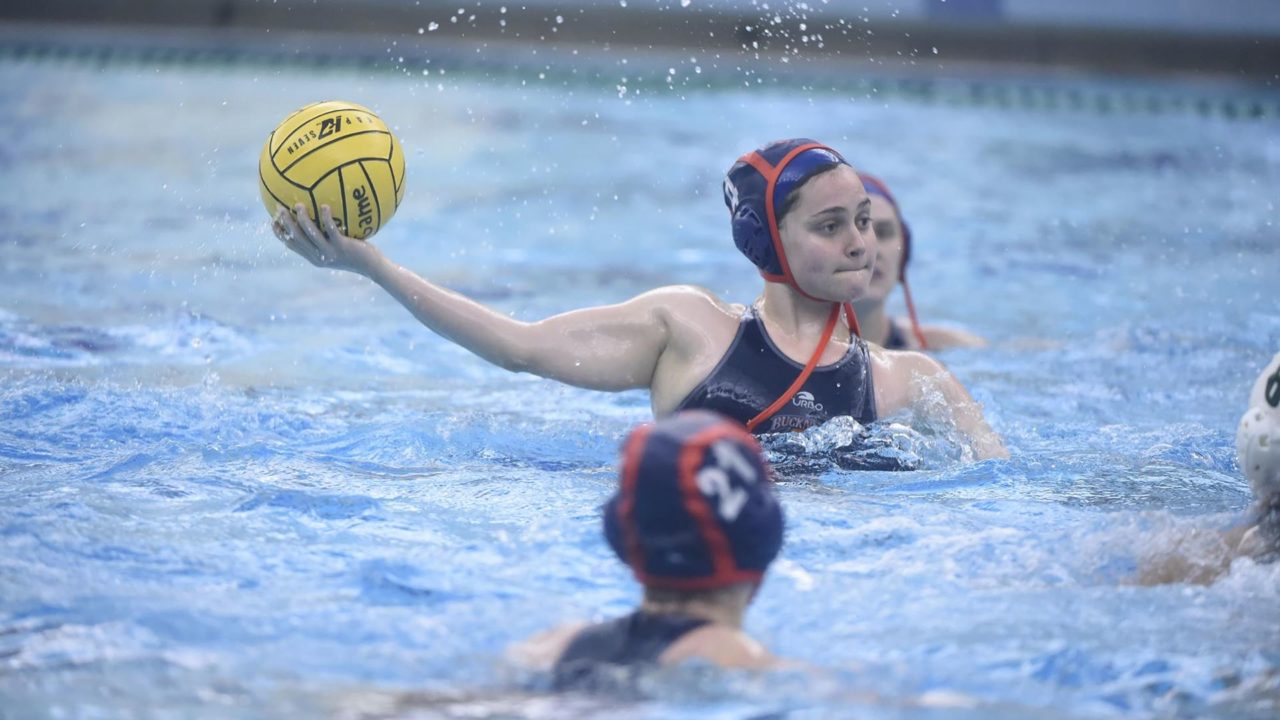 Paige Furano racked up a school game-record tying seven goals and Ally Furano added three in #24 Bucknell’s 15-13 loss to #18 Harvard on Sunday. The Bison got five goals from Ally Furano in its 11-7 win over George Washington on Saturday. Nina Benson accounted for five scores in the Bison’s 16-8 win over Saint Francis (PA), while Paige Furano and Ally Furano chalked up three goals apiece.

#7 Pacific saw Kyra Christmas scored six goals in its 12-6 win over Azusa Pacific on Saturday. That followed her three-goal effort in the Tigers’ 10-7 loss to #3 UCLA on Friday.

Maddy Nye was 6-for-6 as Mercyhurst blew past Penn State Behrend 19-5 on Saturday. Mason Feldstein added three scores in the win. Nye added another six-goal effort as the team topped Villanova 14-9 on Sunday. Sarah Hershey chipped in five goals in the victory. Nye also netted six goals in the team’s 23-11 win over Grove City on Friday.

#16 Wagner got five goals from Sofia Diaz Alvarez and three from Erica Hardy in an 11-10 loss to #18 Princeton on Saturday.

#14 Harvard topped Bucknell 15-13 thanks in part to a five-goal haul by Sofia Carrera-Justiz amongst eight scorers.

Saint Francis (PA) got five goals from Metzzli Enriquez in the 16-8 loss to Bucknell on Saturday.

Claremont-Mudd-Scripps’ Amelia Ayala put in five goals, including four in the fourth quarter, as the Athenas rallied past Chapman 10-9 on Saturday. Ayala notched a hat trick in the Athenas’ 11-5 road win over Occidental on Wednesday.

Chapman got five goals from Audrey Hattori in its 10-9 loss to Claremont-Mudd-Scripps on Saturday.

Kaysie Stuba scored five goals, while Kate Murray and Camille Oswald chimed in with hat tricks as Villanova edged past McKendree 16-15 on Saturday. Paris Huffman accounted for four goals and Kate Stenmoen added three as the Wildcats blew out Penn State Behrend 22-7. Murray and Stenmoen added three more goals apiece in the team’s 11-10 win over Gannon. On Sunday, Murray and Stuba netted three goals each in a 14-9 loss to Mercyhurst.

Emily Westlove notched five goals and Carley Manuel added a hat trick as McKendree fell to Villanova 16-15 on Saturday. Westlove turned in three goals as the Bearcats dropped a 13-9 decision to Gannon.

Gannon got five goals from Kelly Fehr and three from Campbell Ruh in an 11-10 loss to Villanova on Saturday. The Golden Knights saw four goals from Ruh as well as hat tricks from Maggie Fortin and Nicole Wiemken in a 15-10 victory over Penn State Behrend on Saturday. Fehr was 5-for-5 in a 13-9 win over McKendree on Sunday, while Wiemken added three goals.

#9 UC Santa Barbara got four goals each from Kate Pipkin and Caitlyn Snyder and three from Sarah Kreiser in a 15-10 win over Cal State Monterey Bay on Tuesday. Kreiser put in four goals to lead a trio of hat tricks in the Gauchos’ 22-6 win over Sonoma State on Thursday. Snyder and Amanda Legaspi followed with three goals apiece. In Saturday’s 11-10 loss to #11 UC Davis, Sarah Snyder paced the team with four scores.

#11 UC Davis saw Hailey Williams net four goals to lead 11 scorers in an 18-9 win over Cal State Monterey Bay on Wednesday. On Saturday, Emily Burne led the #11 Gauchos with a hat trick in an 11-10 upset win over #9 UC Santa Barbara.

#13 Loyola Marymount got four goals from Mollie Williams in an 11-7 win over #15 Fresno State on Saturday.

Brown’s Katie Klein went 4-for-4 on shot attempts to pace the team in a 15-9 win over LaVerne on Thursday, while Dagmara Czajka added a hat trick. Klein put in three goals in the 9-7 loss to Concordia on Wednesday.

LaVerne’s Guarina Garcia put in four goals and Jassmine Kezman turned in a hat trick as the team bested Chapman 11-7 on Wednesday. Garcia added four more scores in a 15-9 loss to Brown on Thursday. Kezman chipped in four goals in an 8-4 win over Redlands on Saturday.

Susanna Zdolsek put in four goals in four attempts as Cal Lutheran posted a 15-3 win over Cal Tech on Saturday. Bri Bulkeley added a hat trick in the win.

Kelsey McIntosh led #1 USC with three goals in the team’s 9-8 overtime loss to #2 Stanford on Saturday.

#22 Cal State Northridge got a hat trick from Tori Wilson, but couldn’t stand up to #10 UC Irvine on Saturday, falling 15-6.

Concordia got three goals apiece from Madison Ravelo and Elena Isogawa in an upset win over Brown on Wednesday.

Occidental’s Monica Chernoff chipped in three goals but it was not enough as the team fell to Claremont-Mudd-Scripps 11-5 on Wednesday.

Cal Tech’s Brittany Percin scored three of the team’s goals in a 20-5 loss to Redlands on Wednesday.

Player of the Week: Emily Byrne, UC Davis – notched third hat trick of the season with three scores in the Aggies’ upset win over #9 UC Santa Barbara; drew four exclusions in the game as well as a key five-meter foul which Chloe converted for the only score of the first period for the Aggies; made two steals in the victory; played just nine minutes in the Aggies’ 18-9 road win over Cal State Monterey Bay.

Paige Furano, Bucknell – Scored 10 goals and added 11 assists as the Bison went 2-1; opened the week with four assists and a drawn ejection in an 11-7 win vs. George Washington; notched three goals, five assists, three steals and four drawn ejections in a 16-8 win over Saint Francis (PA); put in seven goals and added two assists in a 15-13 loss to #18 Harvard

Defensive Player of the Week: Marissa Webb, Princeton – Made 10 saves in the Tigers’ 11-10 win over #16 Wagner on Saturday; wrangled five saves in the fourth quarter as Princeton rallied for the win

Rookie of the Week:

Laura Larkin, Princeton – Scored two goals as the Tigers notched an 11-10 win over #16 Wagner on Saturday

Player of the Week: Maura Cantoni, San Diego State – Averaged 4.74 goals against; held Santa Clara to one goal while registering 12 saves (92.3 percentage) on Thursday; notched a season-high 17 saves as SDSU got past #19 San Jose State 10-9 in overtime on Saturday; posted nine saves, while allowing just six goals against #8 Arizona State; allowed just one goal in a half of play against Cal State Monterey Bay on Wednesday.

Offensive Player of the Week: Kate Murray, Villanova – Posted 21 points in a 3-1 weekend with 11 goals and 10 assists; added 13 steals.

Defensive Player of the Week: Kennedy Joseph, Siena – Made 21 saves against three Top 25 foes at the Sun Devil Invitational; posted steals and nine saves with a .563 save percentage vs. #21 San Diego State

Player of the Week: Sierra Painter, San Jose State – Put in a team-best three goals as #19 San Jose State upset #8 Arizona State on Saturday, lifting the Spartans to their first MPSF win since 2017

Newcomer of the Week: Ryann Neushul, Stanford – Scored two goals and drew five exclusions in the Cardinal’s 9-8 overtime win over #1 USC; notched a goal and a steal in a 16-7 win over #10 UC Irvine on Monday.

Offensive Player of the Week: Amelia Ayala, Claremont-Mudd-Scripps – Scored eight goals in win over Occidental (11-5) and Chapman (10-9); notched a hat trick vs. Occidental; put in five goals in the comeback win over Chapman

Defensive Player of the Week: Shelby Garcia, LaVerne – Accounted for seven saves and three steals, while allowing just four goals in an 8-4 win over the Redlands; Nabbed nine saves, while allowing seven goals in an 11-7 win over Chapman; kept Brown to just three goals in one half of a 15-9 loss to the Bears