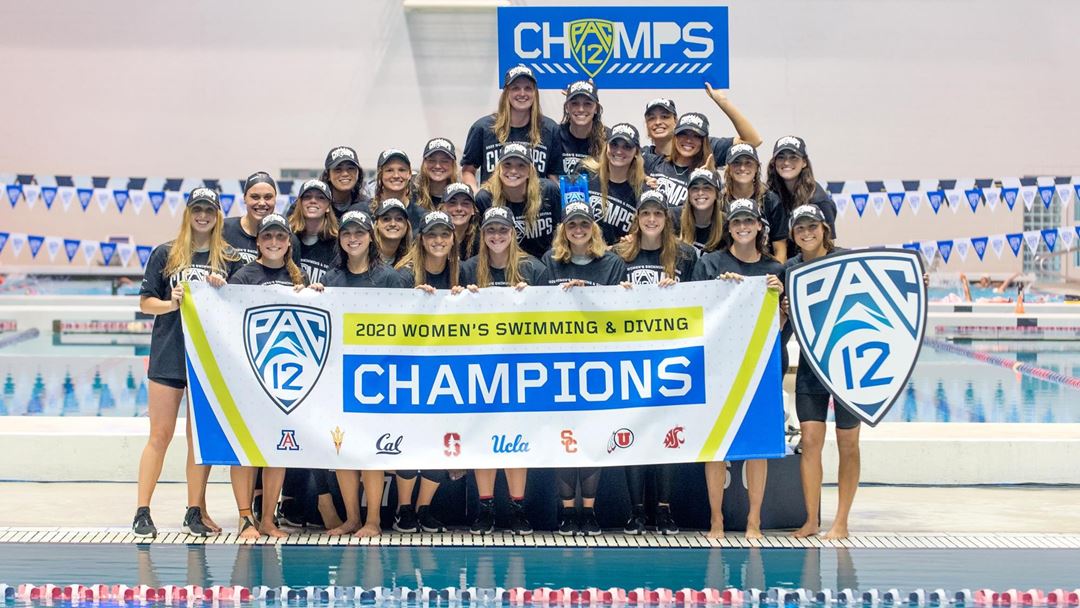 The 2021 Pac-12 conference is planning to host their men’s and women’s swimming championships at the University of Houston in 2021. The original and regular host, the King County Aquatic Center in Federal Way, Washington, has remained closed, as it has been since last March.

The diving championships will be held in Arizona.

Most of the conference’s home pools are outdoor facilities, and the conference in the last few years has shown a strong preference to host the meet indoors, because of the better control over weather.

Of course, the last time Houston hosted a Division I conference championship meet, even the indoor facility was impacted by what was happening outside – a nearby water main break dramatically impacted the 2020 WAC Championships and turned the meet into a timed finals event.

The University of Houston has a 50-meter pool with two bulkheads, able to split the facility into 3 courses. The facility has off-deck spectator capacity for 1,000 people.

Some of the final details, including exact dates and whether spectators are allowed, are still being ironed out, sources tell SwimSwam. The University of Houston has allowed limited spectators to attend home sporting events this season, though the Pac-12 expanded its ban on spectators at Pac-12 campus events beyond the original expiration of January 1.

That policy, though, has allowed student-athlete families to attend sporting events when in compliance with NCAA guidelines and local public health and campus authorities.

The current leading plan would have the men’s meet follow immediately after the women’s meet, rather than the traditional consecutive-weekends. That decision is expected to be shored up this week.

The Pac-12 previously was deep in talks to host the meet in San Antonio, but that wound up falling through late in the process.

The Houston area is currently in the midst of a spike of coronavirus cases, though there are some indications that some parts of the city have begun to turn the tide. Over the last week, Houston is averaging 56 new daily coronavirus cases per 100,000 population over the last week. While that’s mid-pack by Texas’ standards, it is well above the United States average of 44 cases/100,000 per day.

The 2020 Pac-12 Men’s Championships was among the last collegiate meets in the country to happen before national coronavirus quarantines began to set in. The Cal men, who are also the defending NCAA Champions, won the most recent title with 856 points – a whopping 278 points ahead of runners-up Arizona.

The women’s meet, a week earlier, was also won by the defending NCAA Champions, Stanford. The Cardinal women also won by a big margin, scoring 1,598 points – 373.5 points ahead of runners-up Cal.

Certainty. Final details subject to safety for the athletes. That is the certainty in the best interest of all athletic competition.

No way👎. SEC wins this argument hands down👍

I agree. The SEC is the best swimming conference in the country because of depth. If they had a challenge meet like the ACC and BIG did a couple years ago (and many folks thought the ACC would win but the BIG won by a ton) you would see the SEC win against any other conference.

This gives Big 12 a good argument for not being the weakest swimming conference anymore. At least they can host their own championships…..

Big Ten is pretty legit when it comes to swimming and diving also. Host their own championships and have some of the finest facilities in the nation.

Slightly off-topic, but does anyone know if UH has ever fielded a men’s team?

Had a real good sprinter Per Ling in the 70’s. Landing spot for some Portland, Maine swimmers in the early 60’s. Does that now classify as “ancient History”?

Women’s and Men’s swim team were coached by Phil Hansel. After the 1976 Olympics, Houston picked up an abundance of international swimmers from Sweden, England, Canada, South Africa, and Australia.

Ang Peng Siong was a world class sprinter from Singapore who held the #1 world ranking and swam for Phil Hansel at Houston. Ang won the 50 free NCAA title in 1983. He was also 2x 50 free US Champion and won the B final the 100m free in the 84 Olympics (there was no 50). UH tied with Michigan for 16th in 83.

Oh so the conference with all the blue state schools that brought the situation on themselves can just put their conference meet in an open state. Nice.

Yes please. We would like to come eat in your restaurants, buy your oil and energy and use your facilities. Then we will return to Gavin’s bubble and wag our arrogant finger at you for how bad you are. Sigh… We’re crazy.

Agree! My kid chose their Uni based on cost, degree availability and likelihood of getting a job at the end of it all. Politics didn’t play into.

Houston is decidedly blue and constantly at odds with the moronic GOP policies coming out of Austin (a city which is also blue).

Urban vs non urban is the new civil war ?

It is new. This migration works in both directions. After the oil crash and savings and loan debacle in the late 80’s, over a million Texans moved to California. I was one of them. Until this year there were far more people leaving Texas for California each year than the other way around.

First the Rose Bowl, now the PAC 12’s…so glad to see the teams get their AD’s engaged about moving the meets and keeping some form of normalcy. A great move and so glad for the teams and the coaches.

Off Topic – but any discussions about having NCAAs there… I hear rumors The GAC might not be able to host The Big Dance in March. (7% max capacity)

I haven’t heard this from anybody.

Which doesn’t mean it’s not true, I just haven’t heard it.

So far, for what it’s worth, the North Carolina limit appears to specifically apply to “spectators” at professional and collegiate sporting events – outdoors. Numbers are limited much lower indoors. It’s not clear if, at the moment, they’d be able to even logistically hold the meet in Greensboro.

We’re now 6 weeks away, so the ‘long distant future’ is all of a sudden not as distant anymore.