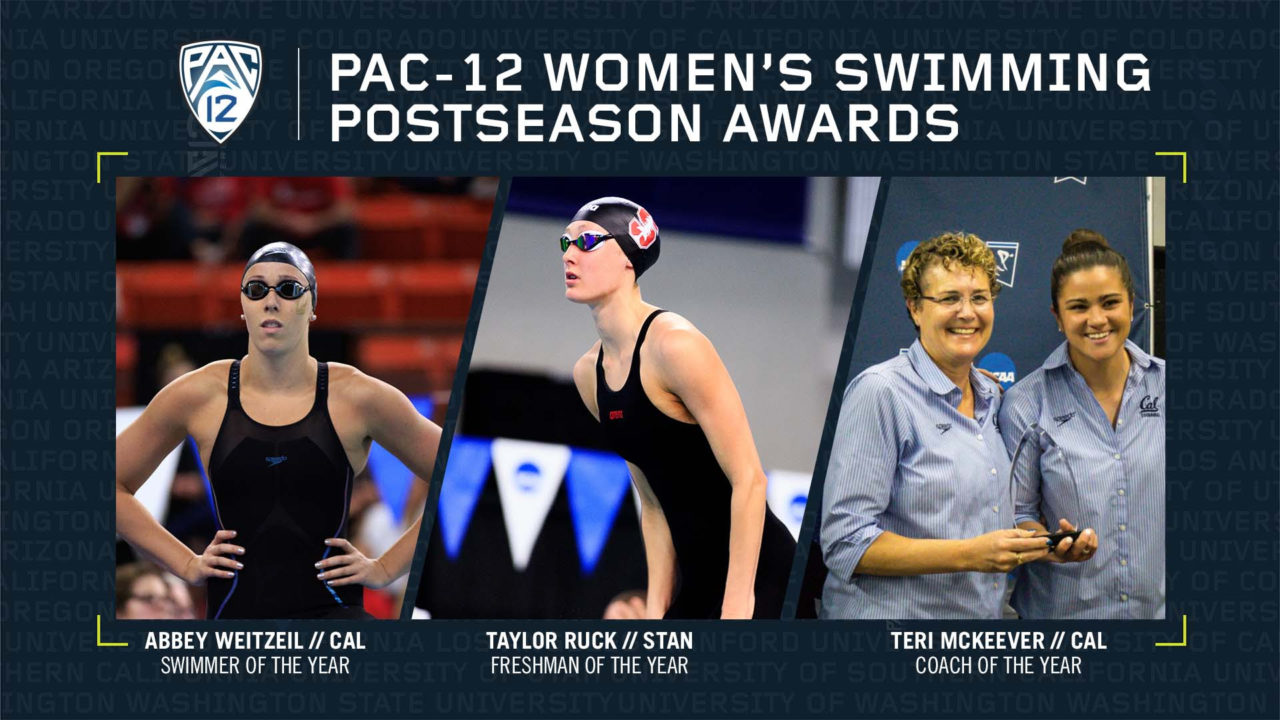 SAN FRANCISCO – The Pac-12 Conference announced the recipients of the 2019 Pac-12 Women’s Swimming and Diving awards, as voted on by the league coaches. California’s Abbey Weitzeil was named the Pac-12 Swimmer of the Year while Golden Bears’ head coach Teri McKeever was voted Pac-12 Swimming Coach of the Year for the eighth time in her 27-year tenure with the program. Stanford’s Taylor Ruck was named the Pac-12 Swimming Freshman of the Year after helping the Cardinal collect its third-straight NCAA National and Pac-12 Championship crowns. For the third-straight year, UCLA’s Tom Stebbins was voted Pac-12 Diving Coach of the Year as he coached senior Maria Polyakova to her second career Pac-12 Diver of the Year honor. Stanford’s Carolina Sculti was tabbed Pac-12 Diving Freshman of the Year.

SWIMMER OF THE YEAR – Abbey Weitzeil, JR, California (Saugus, Calif.) – Weitzeil was named the 2019 Pac-12 Women’s Swimmer of the Year after winning three individual events and contributing to four relay victories at the Conference championships where she earned Pac-12 Swimmer of the Meet honors. She set a Cal and Pac-12 meet record in the 100-yard freestyle touching in at 46.35 and later won the 200 free with a personal-best time of 1:41.97. At the NCAA Women’s Swimming and Diving Championships, Weitzeil won an individual NCAA title, broke three NCAA records and topped the podium in four relay events to help California earn a runner-up finish for the third-consecutive year. Weitzeil swam the anchor leg on Cal’s 200 free relay team that broke the NCAA, American, U.S. Open, meet and pool records with a time of 1:24.55. She helped Cal’s quartet top the 400 free relay with an NCAA record time of 3:06.96 and also set a new pool record in the 400-yard medley relay at 3:25.24. Continuing with her record-breaking performances, Weitzeil went on to set a new NCAA, American, U.S. Open, meet and pool record in the 50 free with a time of 21.02. Weitzeil also took fourth in the 100 free (46.97) and 200 free (1:42.29) events at the national meet. The junior is a public health major and is the first Golden Bear to win the nod since Olympian Missy Franklin won in 2015 and marks the program’s 12th all-time award.

SWIMMING FRESHMAN OF THE YEAR – Taylor Ruck, FR, Stanford (Scottsdale, Ariz.) – Ruck is the fourth-straight Cardinal to win the Pac-12 Swimming Freshman of the Year honor following Simone Manuel (2015), Ella Eastin (2016), Katie Ledecky (2017) and Brooke Forde (2018). Ruck recorded six podium finishes at the Pac-12 Women’s Swimming and Diving Championships, including two individual runner-up finishes in the 100- (50.52) and 200-yard backstroke (1:48.67) and contributions to four relay teams that each placed second. At the NCAA Women’s Swimming and Diving Championships, Ruck took second in the 200 free (1:40.37) and 200 back (1:47.59) and finished third in the 100 back (50.34) to help Stanford win its third-straight NCAA Championship and national best 11th all-time crown. Ruck’s 200 free time tied Simone Manuel for the second-best mark on the school’s all-time list and was one-hundredth behind Katie Ledecky‘s school record. The freshman was part of the NCAA Championship-winning 800 free relay team with Katie Drabot, Ella Eastin and Brooke Forde that clocked a pool record at 6:47.22. She also swam on the 200 free (1:26.50) and 400 free relays (3:09.73) that each took home a bronze medal and was part of Stanford’s 400 medley relay team that placed sixth (3:28.45).

SWIMMING COACH OF THE YEAR – Teri McKeever, California – McKeever has been named the Pac-12 Women’s Swimming Coach of the Year for the first time since 2015 and collects her eighth career award to tie Arizona’s Frank Busch for the most awards by a coach in Pac-12 history (1999, 2002, 2009, 2011-2013, 2015, 2019). McKeever led California to its third consecutive runner-up finish at the NCAA Women’s Swimming and Diving Championships, where she was named CSCAA Coach of the Year. McKeever collects her fifth national coach of the year honor, tied for the second-most nationally, and leads all league coaches. Cal has placed among the top three at the NCAA Championships 11 years in a row to extend the longest current streak in the country and has led the Golden Bears to national titles in 2009, 2011, 2012 and 2015. With McKeever at the helm of the Cal women’s swimming program, student-athletes have been named Pac-12 Swimmer of the Year nine times and National Swimmer of the Year on eight occasions.

DIVER OF THE YEAR – Maria Polyakova, SR, UCLA (Moscow, Russia) – Polyakova was named the Pac-12 Women’s Diver of the Year for the second time of her career after winning two Pac-12 crowns at the Conference championships. The senior won the 1-meter (335.70) and 3-meter (350.70) springboards for her third and fourth career titles at the championships to earn Pac-12 Diver of the Meet, as voted on by the league coaches. Polyakova became the first-ever UCLA diver to win an individual NCAA Championship after taking home the 3-meter crown (396.00) for the program’s first individual title since Annette Salmeen won the 200-yard butterfly in 1996. Her 3-meter score was three points shy of her own school record and made her only the sixth diver in Pac-12 history to win the NCAA event. The Moscow, Russia native also posted a runner-up national finish in the 1-meter (346.90), totaling 37 points and garnering 2019 CSCAA Diver of the Year accolades. She is the fourth Pac-12 diver to receive the national honor and first since 2007 (Cassidy Krug, Stanford). In 2017, Polyakova collected UCLA’s first Pac-12 Diver of the Year honor since Kristen Walls claimed the inaugural award in 1994 and her selection marks the program’s third consecutive and fourth all-time nod (Eloise Belanger, 2018). The linguistics major is a two-time CSCAA Scholar All-American and Pac-12 All-Academic honorable mention member.

DIVING FRESHMAN OF THE YEAR – Carolina Sculti, FR, Stanford (Rye, N.Y.) – Sculti becomes the sixth Cardinal all-time to win the Pac-12 Diving Freshman of the Year honor and third in the last eight years (Haley Fransworth, 2017; Stephanie Phipps, 2011). At the Pac-12 Women’s Swimming and Diving Championships, the freshman took third in the 1-meter springboard (313.10), second in the 3-meter (346.45) and rounded out the meet with a seventh-place result on platform (204.94). Freshmen accounted for five top-eight finishes at the Conference championships with Sculti responsible for three of them while being the only rookie to score in all three events. She completed her first year on The Farm with a pair of All-America honors at the NCAA Women’s Swimming and Diving Championships in the 1-meter and 3-meter after placing 12th (297.80) and 14th (316.60), respectively.

DIVING COACH OF THE YEAR – Tom Stebbins, UCLA – Stebbins earned the Pac-12 Diving Coach of the Year award for the third-straight year, becoming the second coach in Pac-12 history to win as many consecutive league honors (Hongping Li, USC: 2001-2003; 2009-2014). He became the first Bruin head coach to win the award multiple times last season and first recipient since 1996 with his nod in 2017. Stebbins coached Maria Polyakova to Diver of the Meet honors at the 2019 Pac-12 Women’s Swimming and Diving Championships after she topped the podium in 2-of-3 diving events. Stebbins was also named the CSCAA Diving Coach of the Year at the NCAA Women’s Swimming and Diving Championships, marking the third honor in Pac-12 history (Hongping Li, USC; 2002, 2006). UCLA led all diving programs at the NCAA Championships with a school-record 75 points behind seniors Eloise Belanger (38 points) and Polyakova (37 points), who were the two highest-scoring divers at the event.