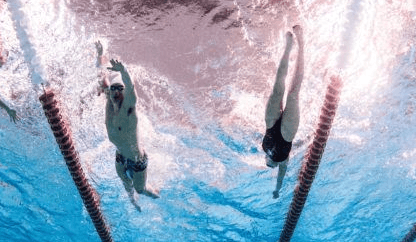 Ottawa University Arizona (OUAZ) has announced that it will be adding men's and women's swimming to its list of varsity sports programs for the fall of 2019. Head coach Jared Gilbert will lead the new teams through their inaugural season. Stock photo via Mike Lewis/Ola Vista Photography

Ottawa University Arizona, located in Surprise, AZ, announced that it will be adding men’s and women’s swimming to its list of varsity sports programs, beginning in the fall of 2019, in time for the 2019-2020 NAIA season. Leading the new teams into their first season will be head coach Jared Gilbert.

Prior to accepting the position at OUAZ, Gilbert held the position of head age group coach for Tiger Aquatics for two seasons, which trains at University of the Pacific in Stockton, CA. Before that, Gilbert coached for Nitro Swim Club in Texas, where he was the lead coach of the bronze group, transitioning age group swimmers from basic stroke refinement to a more competitive focus. A graduate of Fresno Pacific University, Gilbert’s first year coaching was spent as an assistant at FPU during the 2010-2011 season.

At FPU, Gilbert was able to experience what is is like to be a team member at a program that has just begun, as FPU’s inaugural men’s season was also Gilbert’s freshman year, 2006-2007. While at FPU, Gilbert garnered All-American honors and helped the Sunbirds to their first NAIA national title. In 2010 he was named the FPU Senior of the Year for his accomplishments, and graduated with a B.S. in Business Management.

“It is a great pleasure to welcome Jared to the OUAZ Athletics coaching family,” says OUAZ Athletic Director Kevin Steele, per a press release from the university. Steele further expressed his excitement about adding Gilbert to the program with the following statement:

“Jared’s tremendous success as a coach at his previous stops and his intimate knowledge of the California swim and dive world make him an excellent choice to start our programs here. Jared was a part of a start-up program as a collegiate athlete, so he understands the unique dynamic involved when starting a program. More importantly, Jared’s love for the Lord and his ability to intertwine his faith and his coaching to lead young people make him a perfect fit for us. I look forward to these new programs and the leadership that Jared will bring to the institution.”

“I am overjoyed to become a part of the OUAZ family,” said Gilbert. “This is a great university that is built around athletics and I am very excited to get started. Very few people get the opportunity to build a program from the ground up and having the opportunity to do so as both formerly as an athlete and now as a coach is a dream come true.”

OUAZ is a satellite campus of Ottawa University, located in Ottawa, Kansas. While the Ottawa University main campus has a deep athletics program, sponsoring 29 differeent programs, they don’t have a swimming & diving team.