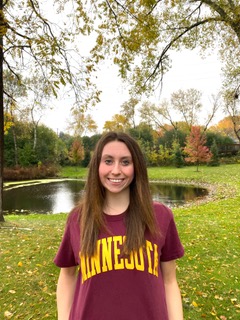 Versatile IM’er Katie McCarthy has announced her commitment to the University of Minnesota for 2023, remaining in-state.  Current photo via Katie McCarthy

Versatile IM’er Katie McCarthy has announced her commitment to the University of Minnesota for 2023, remaining in-state. She made the “Best of the Rest” section of our Way Too Early list of top girls recruits in the class of 2023.

“I’m so excited to announce my verbal commitment to continue my academics and athletics at the University of Minnesota!! Thanks to all my coaches, family, and teammates for the endless support throughout my career. Go Gophers!!”

McCarthy is currently a junior at Edina High School in Edina, Minnesota. There, she is a multi-time Sectional Champion and State Championship finalist. At the club level, McCarthy represents Edina Swim Club, where she is an Olympic Trials qualifier. At Wave 1 of Olympic Trials last June, McCarthy placed 3rd overall in the 400 IM, nearly qualifying to compete in Wave 2.

With her best times, combined with her recent success in the long course pool, McCarthy is a huge pick-up for the Minnesota women. In both the 200 IM and 400 IM, McCathy would have ranked 4th on Minnesota’s roster last season, with almost 2 full years left to improve her times before arriving on campus. In addition, McCarthy’s contribution to the roster would have been even bigger in her “off-events”: the 200 and 500 freestyle. With her best time, McCarthy would have had the fastest 500 freestyle on Minnesota’s roster last season, and her 200 freestyle time would have ranked 3rd.

At the 2021 Big Ten Championships, McCarthy would have qualified for the B-finals of the 400 IM and 500 freestyle with her best times. In addition, she would have made the C-final of the 200 freestyle, and would have been just shy of finaling in the 200 IM. At those championships, Minnesota placed 6th out of 13 teams. The team was led by backstroker Emily Cook and freestyler Maggie Summit, the latter of whom will be a senior when McCarthy arrives on campus.

With her commitment, McCarthy is set to join Claire Reinke in Minnesota’s class of 2027.

Proud of you, Katie!

This headline is a bit deceiving. She was a Wave I OT finalist.

Maybe a bit deceiving, and totally unnecessary for you to point it out.