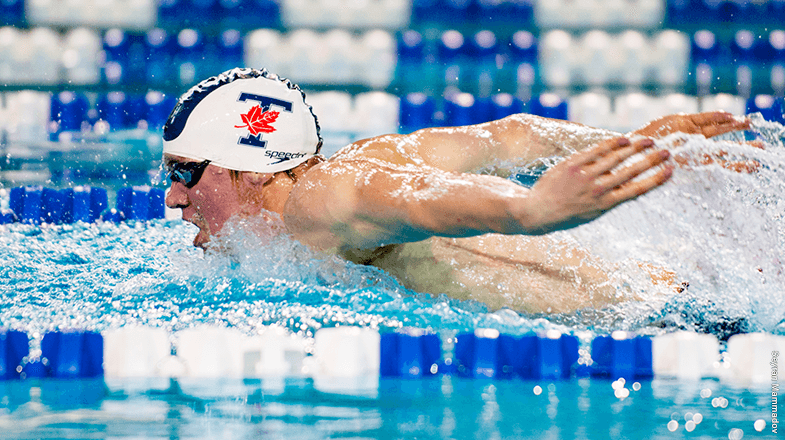 Third-year University of Toronto Varsity Blues swimming standout Osvald Nitski has been honoured as U SPORTS proudly announced the student-athletes selected as Top 8 Academic All-Canadians for the 2016-17 season on Thursday afternoon. Current photo via Toronto Athletics

Third-year University of Toronto Varsity Blues swimming standout Osvald Nitski has been honoured as U SPORTS proudly announced the student-athletes selected as Top 8 Academic All-Canadians for the 2016-17 season on Thursday afternoon.

The elite group will be honoured at a later date by Her Excellency the Right Honourable Julie Payette, the newly-appointed Governor General of Canada.

Nitski becomes the ninth Varsity Blue, and sixth in the past eight years, to earn the recognition since its inception in 1993-94. He is the third male swimmer from U of T to boast the honour after Russell Jones in 1996-97 and Ian MacLeod in 2004-05.

In only his second season at the University of Toronto, Osvald Nitski has proven his dominance not only in the pool, but in the classroom as well. After earning both U SPORTS and University of Toronto male Rookie of the Year honours in 2015-16, Nitski reached the national podium for the second consecutive year, earning the individual bronze medal in the 200-metre butterfly last February. The native of Tallinn, Estonia helped the Blues to a silver-medal team finish on the national stage.

At the 2017 conference championships, Nitski reached the podium four times. The two-time OUA first team all-star claimed two individual gold medals, winning the 400 and 1500m freestyle events, while claiming the silver medal in the 200m butterfly and bronze medal in the 400m individual medley. He was a key contributor as the Varsity Blues won their 14th straight OUA banner.

Academically, Osvald has been recognized on the Dean’s Honour list in each academic term at the University of Toronto’s prestigious mechanical engineering program. A two-time U SPORTS Academic All-Canadian, Nitski earned the J. Colin Finlayson scholarship, awarded based on academic merit to students who demonstrate leadership in the community. He also received the Department of Mechanical and Industrial Engineering scholarship and won the Natural Sciences and Engineering Research Council of Canada (NSERC) undergraduate student research award.

Despite his busy schedule, Nitski also finds time to help out in the community. In 2016-17, he volunteered his time with the Blues Buddy Up program, a leadership and character building initiative, created and delivered by University of Toronto Varsity Blues athletes, that is designed to target personal and interpersonal skill development in elementary aged students.

“Osvald was a highly recruited swimmer out of high school and he chose U of T because he is a superb student, proven by his rank as one of the top students in his engineering class,” said long-time Varsity Blues head coach Byron MacDonald. “The fact that he can combine such lofty academic success with his swim career has netted him several honours, including winning the national title in two events. He regularly takes on the toughest events in the meet program and excels. He understands the benefits of hard work and has moved his career forward due to his relentless pursuit to get better.”

In 2016-17, 3,643 U SPORTS student-athletes are being recognized as Academic All-Canadians, having maintained an average of 80 per cent or better over the academic year while competing for one – or more – of their university’s varsity teams.

Among these outstanding individuals, one female and one male student-athlete from each of the four U SPORTS conferences are selected annually to make up the Top 8.  The other seven honourees are Meg Casault (Volleyball, Alberta) and Geoff Gray (Football, Manitoba) from Canada West, Katherine Bearne (Soccer, Ottawa) from OUA, Fabiola Forteza (Rugby, Laval) and Louis-Mathieu Normandin (Football, Montreal) from RSEQ and Anna Dunn-Suen (Volleyball, Dalhousie) and Eric Locke (Hockey, StFX) from AUS.

For more information, scores and highlights on your favourite U of T athletes and teams, please visit www.varsityblues.ca. Don’t forget to follow us on Twitter, Instagram, SnapChat and Facebook for the latest and greatest in Varsity Blues intercollegiate athletics.