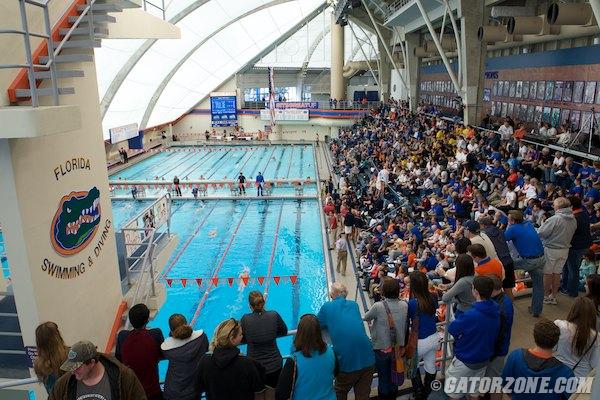 The Florida Gators have picked up some international talent, as Israeli Olympian Zohar Shikler has verbally committed to join the women next fall. Archive photo via GatorZone

The Florida Gators have picked up some international talent, as Israeli Olympian Zohar Shikler has verbally committed to join the women next fall. Shikler is a member of Israel’s National Team, and has represented her country internationally at high level meets such as the 2016 Rio Olympics and 2015 FINA World Championships.

Shikler is primarily a freestyler, and the 50 free is arguably her best event. That’ll give the Gators a boost in the individual freestyles, but she’ll also make a good addition to their relays. She doesn’t have any yards experience yet, but her best times in long course meters indicate her potential to be an immediate factor at the SEC Championships and NCAAs.

Shikler’s times in the 50 free and 100 free convert to yards times of 21.96 and 49.17 respectively. That would likely make her an SEC Championship finalist and NCAA scorer in the 50 free. In the 100 free, she would’ve landed in the B-final at the 2016 SEC meet, but she’d be within tenths of what it took to make the top 8 in that event.

You Don’t Mess with the Zohar!
(is this thing on?)

Fast! Looks like she’ll be 20 when she starts at Florida. How does that work in terms of years of NCAA eligibility?

I don’t think that’ll make a difference. I think Theresa Michalak was 20 when she started as a freshman. I’ve seen that a few times but can’t think of any other examples.

and how many years did Theresa swim? One has 5 years from the time you graduate high school to get 4 years of eligibility. exceptions are military and church. she might have served in their military since it is mandatory in Israel.

Theresa is still swimming. She ended up transferring and is now a senior at West Florida.