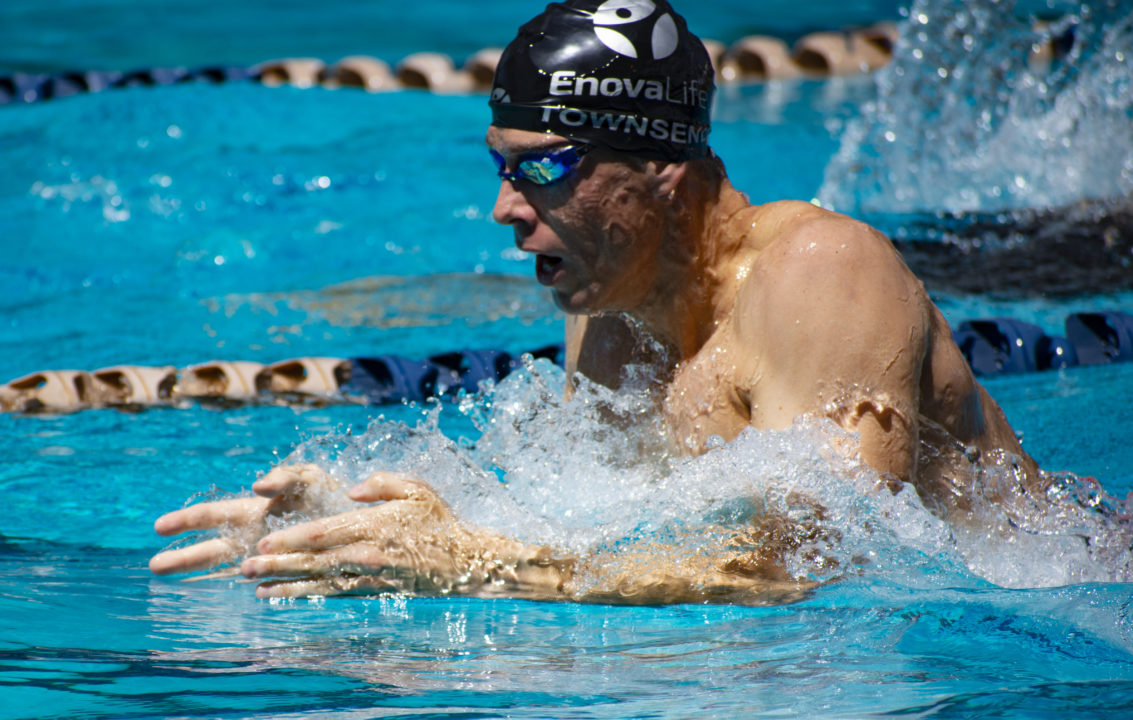 34-year old Darian Townsend's swim in the 200 IM is under the FINA World Record, but not under the United States Masters Swimming Record. Current photo via Irene Murphy

Olympic gold medalist Darian Townsend has swum under the FINA Masters World Record, though not the USMS World Record, in the 200 long course meter IM. Swimming at the Silver Fin Summer Classic this weekend in Arizona, Townsend swam a 2:05.65 in the 200 IM.

The 34-year old Townsend is technically racing in the 35-39 age group, because he’ll be 35 before year’s end – the standard for age groups by FINA rules. There is an incongruity in the records for this age group – the United States Masters Swimming Record for the 35-39 age group was set in 2002 by Ronald D. Karnaugh at 2:05.64; however, FINA recognizes the Masters World Record as belonging to D. Oliveira Yabe from Brazil, who swam a 2:07.24 in 2016.

Townsend won an Olympic gold medal in 2004 as part of South Africa’s men’s 400 free relay team. In 2014, however, he announced that he had earned American citizenship and was going to push to represent the United States internationally. He wound up winning 5 medals at the 2014 Short Course World Championships and 2 at the 2015 Pan American Games representing the United States, though he wound up short of qualifying for the 2016 US Olympic Team. He retired from professional swimming in 2017.

At the same meet, Jeff Commings swam a 29.55 in the men’s 50 breaststroke. For Commings, who turned 45 in February, that swim is faster than the USMS Record of 29.61 that was set just a few weeks ago by Steve West.

Both swimmers hold other National and World Records in Masters swimming. Townsend, specifically, holds 8 FINA World Masters Records in the 30-34 age group, including in the 200 IM: a swim of 2:02.18.

Do you have to be officially retired to own masters record?

Nah, lots of us still work.

No need to be retired officially. You just have to swim at a sanctioned masters event for your swims to count against masters records.