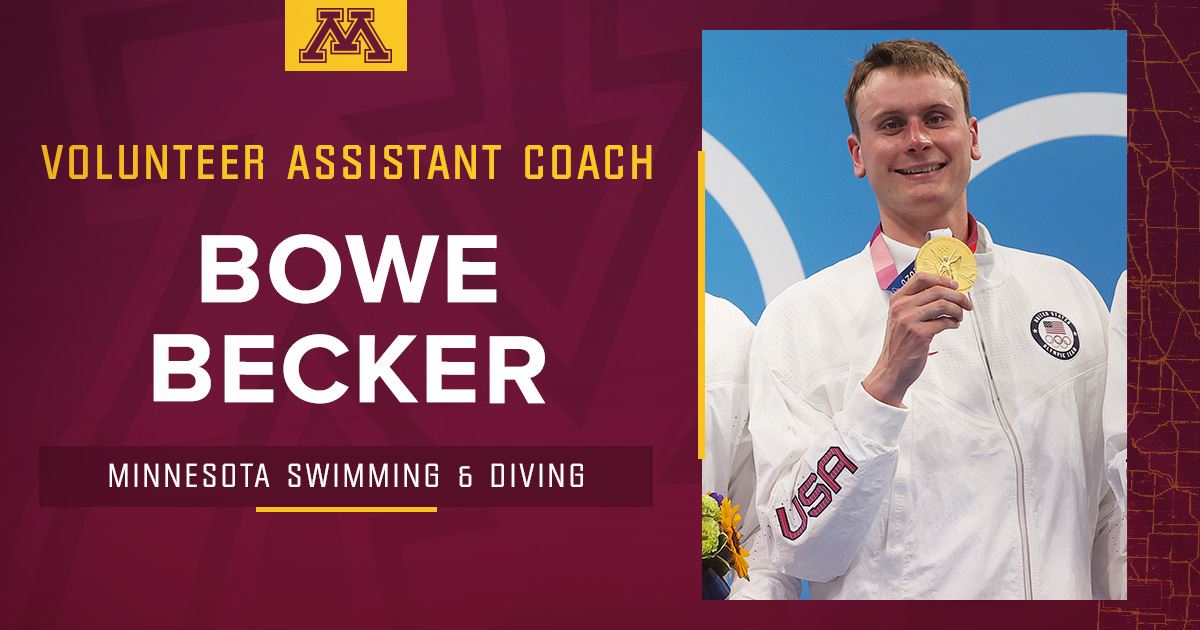 Becker, an eight-time All-American with the Gophers, will continue to train at the university through 2024. Current photo via Minnesota Athletics

Indiana super-senior Gabriel Fantoni swam a 20.9 in the 50 yard fly in briefs last week at the end of a 2 hour practice session.

Becker, a 2019 Minnesota grad, is coming off a standout performance at the Tokyo Olympic Games, swimming the third leg for the United States on the gold medal-winning men’s 4×100 freestyle relay in Tokyo.

“We are excited to have Bowe on staff this season,” Minnesota head coach Kelly Kremer said. “His wealth of experience as a professional athlete will benefit the current team greatly.”

Becker will continue to train at the university through 2024, and just like we saw last week with Katie Ledecky taking on a volunteer assistant position with the University of Florida, it’s become fairly common for post-grad swimmers to join the coaching staff. It allows the athlete greater latitude to travel and train with the college team that would not necessarily be afforded to them if they were simply training as a post-grad, and it can also be utilized as a recruiting tool.

Becker was an eight-time All-American during his four-year career at Minnesota, including earning a runner-up finish at the NCAA Championships in his senior year in the men’s 100 freestyle, blasting a time of 40.83 that currently ranks him fourth all-time in the event. He also had back-to-back top-four finishes in the 50 free (third in 2018, fourth in 2019) in his junior and senior seasons with the Gophers.

Becker was not on many people’s shortlists to make the U.S. Olympic team this past summer, but he came through in a big way by dropping a personal best time of 48.22 in the 100 free final at the Olympic Trials to place fifth and qualify for Tokyo in the 4×100 free relay.

At the Games, Becker split 47.59 on the American men’s prelim relay, earning a spot on the finals team. In that race, the Las Vegas native split a scintillating 47.44, tied for the fifth-fastest in the field among those with a relay exchange, helping the U.S. to a decisive win by more than a second in a time of 3:08.97.

Becker became the seventh Gopher in school history to earn a swimming medal at an Olympic Games and the fourth to win gold, joining Virgil Luken (1964), Walter Richardson (1964) and David Plummer (2016).

In addition to his NCAA exploits, Becker was also a three-time Big Ten champion while at Minnesota, and currently hold the school record in the men’s 50 free, 100 free, and is a member of the teams that hold the marks in the 4×100 free, 4×50 medley and 4×100 medley relays.

The Minnesota women placed sixth out of 13 teams at the 2021 Big Ten Championships, while the men took ninth out of 10 teams. At the 2021 NCAAs, the women’s team placed 24th, with Sarah Bacon earning a pair of diving victories, while Max McHugh swept the 100 and 200 breaststroke events as the Gopher men placed 21st.

Oh cˋmon how are they even still trying to sell this „volunteer assistant coach“ story?

I am not sure what you mean. Is he not a volunteer assistant???

While every situation is different, the primary drivers behind college teams bringing on an Olympic athlete as a “volunteer assistant” are two things:

1) the school can pay for their travel, and they can train with the varsity team; and
2) In light of the above, recruiting. This means they can tout ‘you will get to train with an Olympian here,’ and have recruits meet with him, he can go to dinner with the recruits when they’re on their recruiting trips, and show them his medal. That’s very powerful.

That being said, Bowe is probably an Olympic gold medalist who will have to get a job after his career is over. Some do, some do not. So, if he… Read more »

Funny. “Have to get a job after his career is over.” For everyone else, they’re the same thing.

Look. We’re all very sorry you were not an NCAA All American, didn’t make the Olympic team, never won an Olympic gold medal, and weren’t offered a nice deal that was good for both you and your alma mater. But, man. This jealousy isn’t pretty.

Reading the comments here.
Not one positive.
Bowe is giving back his knowledge
And his time and love what he does.

To go from not swimming for six months to representing the hardest to qualify for nation in the blue ribbon event and winning the most storied relay in swimming at the OLYMPICS! It’s like when Kurt Warner went from bagging groceries after being cut from Green Bay to leading the Rams to winning the Super Bowl! Never give up!

Thank you for this. People go nuts on Bowe not sure why.

In these trying times,
This is a good news story!!
It’s hearing about the Taliban,
Delta strain or Evergrande
Going bankrupt that sends
Me bonkers !! 🙄

Bowe has turned into one of my favorite swimmers since listening to him on the swimswam podcast. Congrats Bowe!

great news for the team! He is the coolest and kindest dude on the deck or in the water