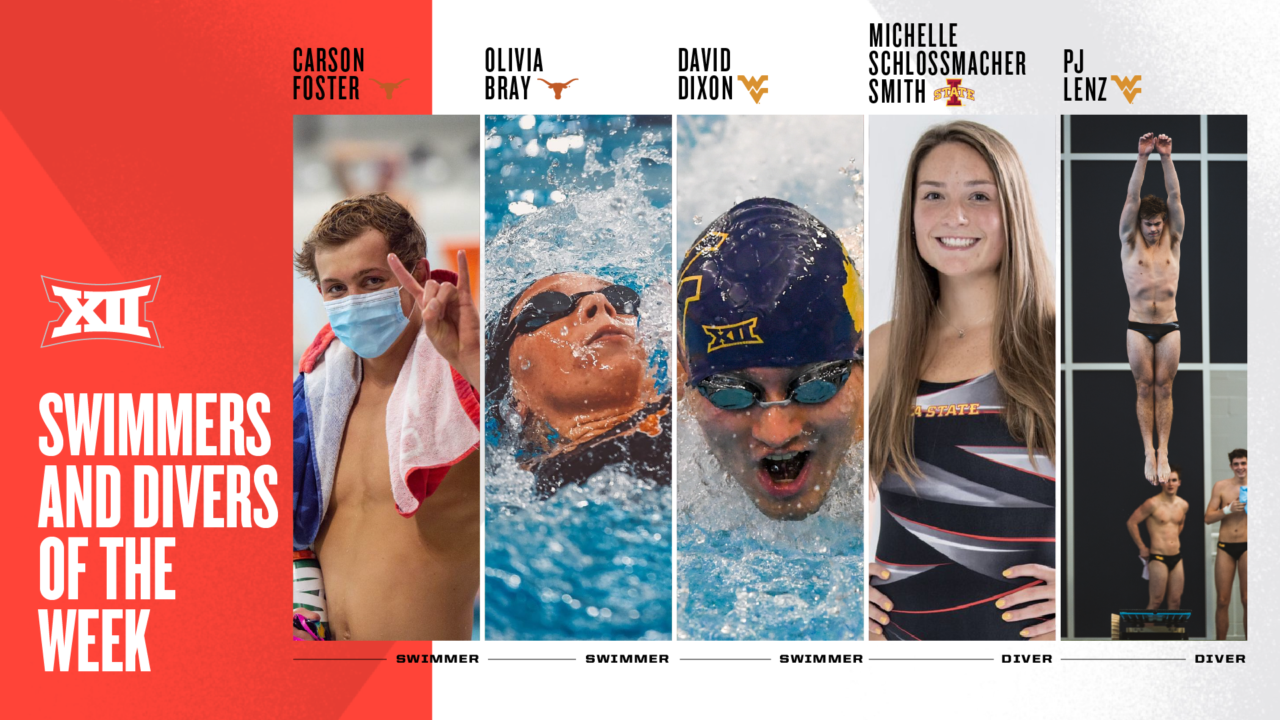 Texas' Bray and Foster were in action at the PSS, while Dixon picked up two wins during WVU's first dual meet of the season against Pitt. Current photo via Big 12 Sports

Pfeifer has decided to swim a fifth year with the Texas Longhorns, expressing her desire to race four NCAA Championship meets.

Five student-athletes from three institutions were honored with Big 12 Swimming & Diving weekly awards. Texas’ Carson Foster and West Virginia’s David Dixon were men’s co-swimmers of the week while the Longhorns’ Olivia Bray was selected women’s swimmer of the week. WVU’s PJ Lenz and Iowa State’s Michelle Schlossmacher Smith were named the divers of the week.

Competing against the top professional and amateur swimmers in the nation at the USA Swimming Pro Swim Series, Foster won the 200-meter butterfly (1:58.60). He also placed fourth in the 200-meter freestyle (1:49.12) and fifth in the 200-meter IM (2:02.99). Foster posted Olympic Trials automatic qualifying times in all three events.

Lenz set a program record on the 3-meter springboard and collected a pair of victories in WVU’s meet against Pitt. He notched a 396.98 on the 3-meter to earn the record and finish in second place, besting the previous record of 390.80, set in 2018. His first victory of the day was during the men’s platform event, reaching a 334.95 total. Lenz earned his second win, leading a 1-2-3 Mountaineer finish, on the 1-meter springboard with a score of 363.23.

Schlossmacher Smith recorded two wins last week for Iowa State with 286.35 points in the 1-meter dive and 277.13 points in the 3-meter. She has posted four Zone-qualifying scores in her first two meets of the season.