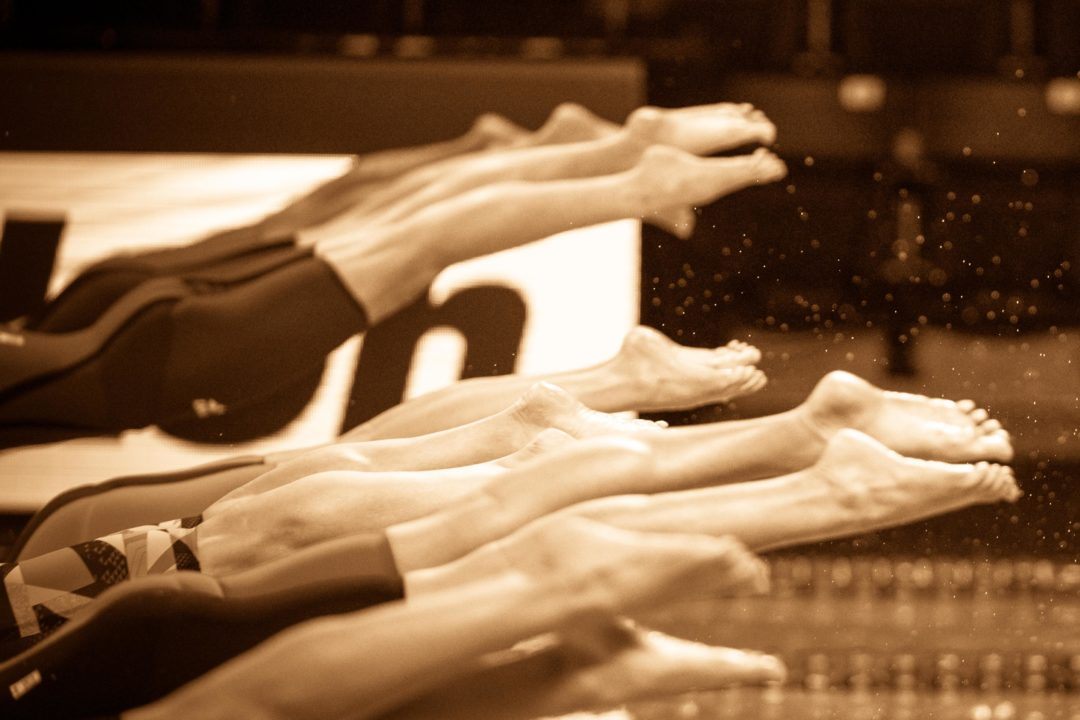 Christian, a junior, raced to victory in the 100 free with a 43.90, using his back half speed to break ahead of Notre Dame sophomore Dan Fujan (44.21). Stock photo via Mike Lewis/Ola Vista Photography

Ohio State’s Nathan Christian put up a fast swim last weekend during the team’s 2-day winter invite. Christian, a junior, raced to victory in the 100 free with a 43.90, using his back half speed to break ahead of Notre Dame sophomore Dan Fujan (44.21).

Louisville freshman Sam Steele had another highlight swim on the men’s side. In the 200 free, Steele cute over a second off his best time, winning the race in a quick 1:36.09. Kentucky freshman Jason Head also broke the 1:37-barrier with his 1:36.77 in prelims. He was slightly off that in finals, though, touching in 1:37.24 for 2nd place.

Louisville sophomore Gracie Long was among the top performers for the women. She won multiple events throughout the meet, but the 100 free was arguably her most impressive win. Long touched in 49.45 to take 1st place in that event over teammate Avery Braunecker (49.93). She was even faster in prelims, as she turned in a 49.36 in the morning heats. Long also won the 200 IM (1:59.70) and put up the fastest 200 free time of the meet with her 1:47.75 in prelims before scratching out of finals.

Columbus, Ohio— Day two of the Winter Invite concluded on Sunday and several Ohio State swimmers had good performances in the pool.

Six Buckeyes posted NCAA B cut times. Daniel Gloude did so in the 200 IM (1:48.13) and finished in first place, the lone OSU swimmers to win an event on Sunday. Austin Mortimer put up a provisional time in the 1650 freestyle (15:22.61) in the first individual event of the afternoon session.

Other notable performances on the day included Alex Jahan posting the fastest time on the team in the 200 breaststroke (1:58.53) and Ryan Wagner doing the same in the 200 backstroke (1:48.67).

Emma Fish also set a personal best in the pool on Sunday, putting up a time of 2:04.31 in the 200 backstroke. The mark was over five seconds faster than her previous collegiate best. Katie Wright and Emily Albrecht joined Kurzydlo in the 50 free, with Wright touching the wall at 23.57 and Albrecht doing the same at 24.07. Wright’s time was her first under 24 seconds in that event and Albrecht posted her fastest time this season.

Next up for the Buckeyes is the 2017 Big Ten Championships. Being hosted on the campus of Purdue University, competition will begin Wednesday evening and conclude on Saturday. Any information you need for the meet can be found here.

I disagree. It will be close but I think he will slip in.