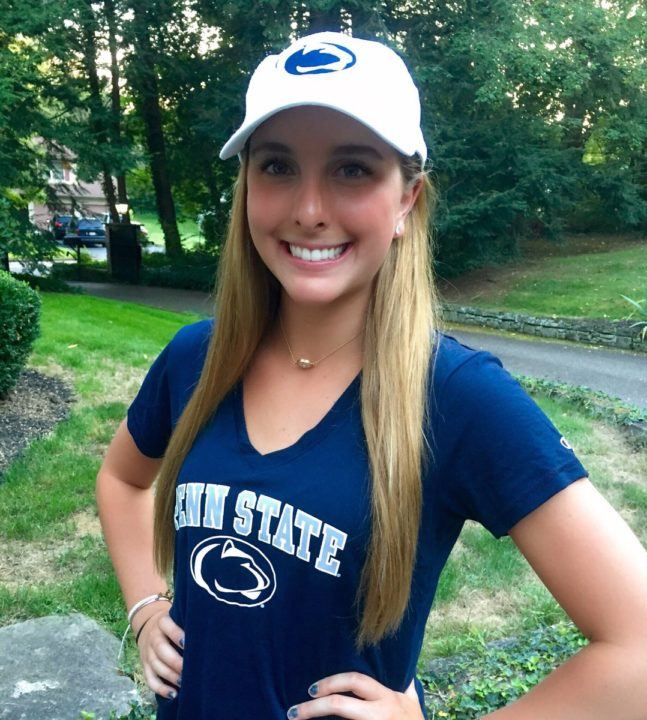 Canton, Ohio-native Carly Hart has given a verbal commitment to Penn State University women’s swimming and diving team, beginning with the 2017-18 season.

“My older brother graduated from Penn State two years ago, and it has always felt like a home to me. I could not see myself *not* going there because it holds such a special place in my heart, and my official visit confirmed that. I absolutely love the coaches and team, let alone the AMAZING school atmosphere. It already feels like a family to me, and I am excited for my future as a Nittany Lion!!”

Swimming for her club team, Firestone Akron Swim Team, at Speedo Junior Nationals this summer, Hart dropped nearly 1 second in the 100m breast to qualify sixth for finals with a 2016 Olympic Trials cut of 1:11.45. She also went best times in the 200m breast and 50m free at Juniors. Hart had a successful short course season as well, dropping 4.2 seconds in the 200y breast to qualify for Winter Juniors, and improving her 200y IM time by 2.5 seconds.

Hart is the second Nittany Lion commit in as many days; she joins Camryn Barry in the Penn State class of 2021.

Couldn’t be happier to announce my verbal commitment to swim at Penn State next year! #WEARE ???????? pic.twitter.com/dQENlMrJz9

How PSU continues to get good recruits with the terrible pool they have amazes me. Think they are only team in Big 10 with 6 lane “very” old pool. What ever happened to them getting new aquatic facility?? Think $ went to their great new hockey rink instead!!

Scandal happened and all athletic plans were pulled…Pegula was a separate donation secured from well known alumnus with connections (source: student).

I agree. The facility is pitiful for a Big 10 school. I can’t imagine trying to train a co-ed program in that facility. I assume they practice in shifts. The design of the natatorium was flawed from the beginning. Why put in three separate pools (6×25 yards, 8×25 meters, and a diving well) instead of one 50 meter pool? I hope the facility gets upgraded sometime soon.

Actually the SCM pool is 6 lanes as well, and just barely deep enough to dive (it is billed as an “instructional pool.”).

Wow! PSU is lucky to have Carly! She’s a future stud to keep an eye on for sure.