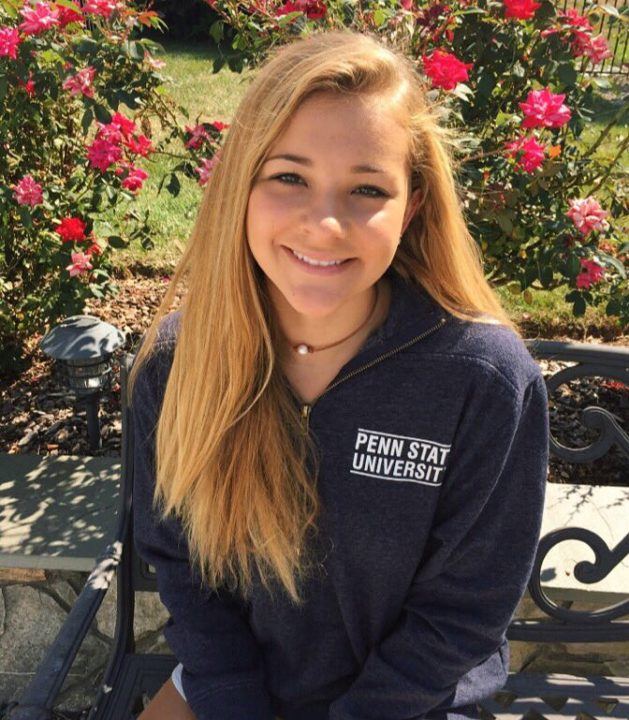 NCAP's Camryn Barry has elected to spend the next four years as a Nittany Lion at Penn State University. Current photo via Camryn Barry on Twitter

Virginia’s Camryn Barry announced via her Twitter account that she had made a verbal commitment to Pennsylvania State University for 2017-18.

“SO excited to announce my verbal commitment to swim at Penn State!! can’t wait to be a nittany lion!!” [sic]

A senior at Briar Woods High School, Barry won the 100 free (51.20) and was runner-up in the 200 free (1:52.09) at the 2016 VHSL 5A State Swimming and Diving Championships. She also led off Briar Woods’ medley relay (27.18) and anchored their 400 free relay (51.83). Barry spent her first two years of high school at Southern California’s Santa Margarita Catholic High School, and was a member of the CIF-SS Division I record-breaking 400 free relay in 2015 that finished second in the country, behind only Carmel Swim Club.

Barry swims for Nation’s Capital Swim Club and specializes in free and back. Her top times, all of which would have landed in Penn State’s top 10 in 2015-16, are as follows:

SO excited to announce my verbal commitment to swim at Penn State!! can’t wait to be a nittany lion!! pic.twitter.com/OTyCYWqoxu

Congratulations Camryn! So happy for you. We miss you out here in CA, but are very proud of you. All the best at Penn State.