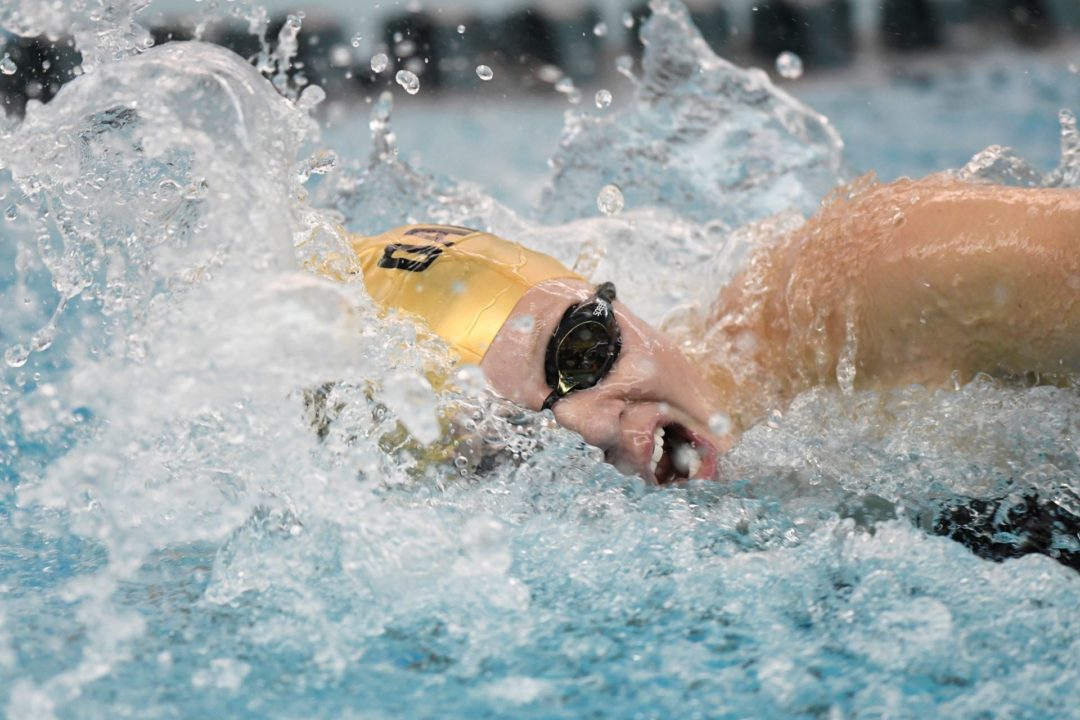 The Oakland University men and women both defeated the UIC Flames on Saturday at their home pool, led by Mack Flowers and Emily Aycock. Archive photo via Jose Juarez, Oakland Athletics

On the men’s side Oakland tallied 10 first place finishes and swam to the top spot in every relay on the day.

The women recorded 14 first place finishes on the day, including a sweep in the relay events.

In Diving, Bernie Turchi defeated the defending Horizon League champion, UIC’s Cydney Liebenberg, finishing first in the 1-meter dive with a score of 240.59. Turchi dove to a second place finish in the 3-meter (245.55).

The Golden Grizzlies will continue competition on the women’s side Saturday, Nov. 9 at 1 p.m. in a tri meet against Eastern Michigan and Florida Gulf Coast at Jones Natatorium in Ypsilanti, Mich.

Both the men and women will resume league competition on Saturday, Nov. 16 as Oakland welcomes Green Bay to the Oakland Aquatic Center beginning at 12 p.m.

A busy UIC swimming and diving team measured up against two powerful teams over the weekend.  They took on Michigan State Friday, and defending Horizon League champion Oakland Saturday.  Though the men and women both lost the dual meets to both rivals, Tim Loeffler was encouraged by his team’s performance.

“Our upperclassmen are really starting to swim the way we know they can and lead by example,” Loeffler said.  “We had a bunch of good times this weekend and in fact our distance swimmers on both sides and some of our men in other events have the fastest times in the conference this year.”

Andrew Lewarchick, Danny Sivak, Hunter Crook, and Cydney Liebenberg all won events in both meets.  The Flames men and women both improved their team scores from Friday to Saturday, and in fact each team posted a season high in the meet against Oakland.