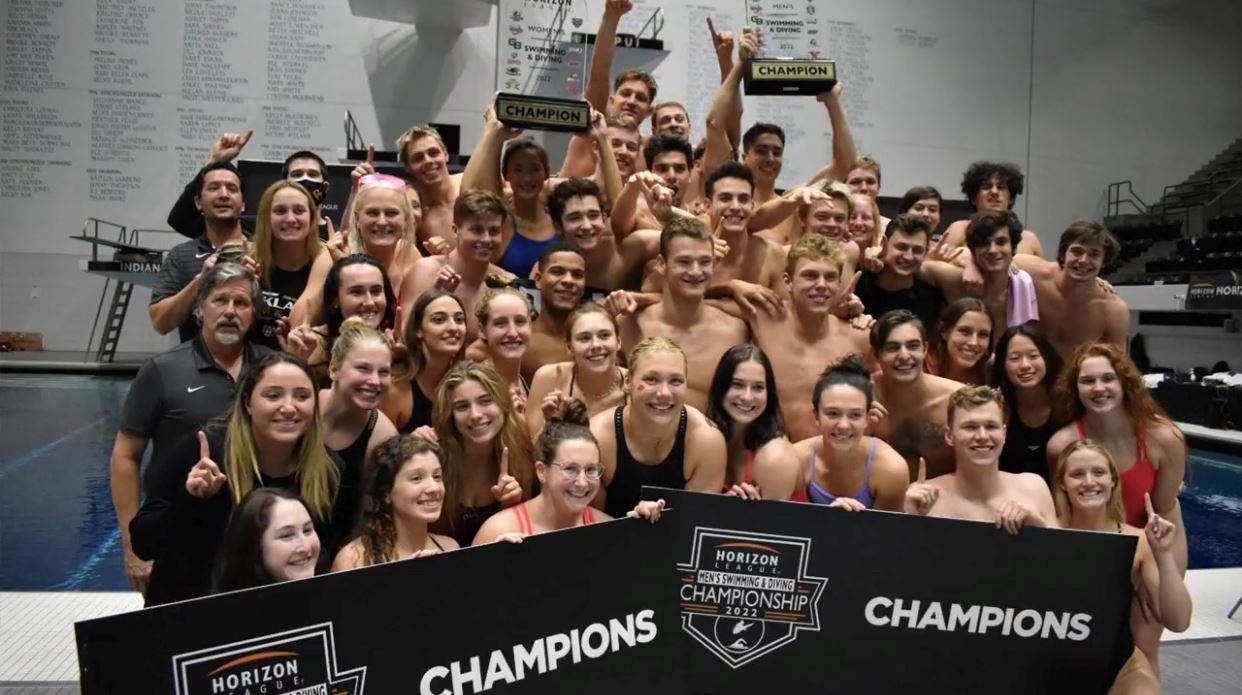 The Oakland Golden Grizzlies have won their 9th-consecutive men’s and women’s Horizon League Titles, tying the conference record for titles. Moreover, the wins tonight mark Oakland’s 44th-straight men’s conference title, and the Oakland women’s 28th-straight. Oakland was originally a member of the NCAA DII Great Lakes Intercollegiate Athletic Conference, before transitioning to NCAA DI and joining the Summit League in 1998. They then moved to the Horizon League in the 2013-2014 season.

Oakland was led on Saturday, as they were throughout the meet, by Susan LaGrand, who won both women’s Swimmer of the Meet and Athlete of the Year for her efforts. LaGrand was dominant in the women’s 200 backstroke tonight, roaring to a 1:53.93 to break her own Horizon League Championship Record. She was about half a second off her personal best of 1:53.48, which she swam at last year’s NCAA Championships and stands as the Horizon League conference record.

LaGrand also led off Oakland’s women’s 400 free relay, helping it to a decisive victory to close out the meet. She posted a 50.34 on the opening leg, which was the 3rd-fastest split of anyone in the field, despite being done on a flat-start. The two splits that were faster than LaGrand also happened to be members of the Oakland relay. Ronja Riihinen anchored the team in 49.87, while Jordyn Shipps clocked a 50.10 on the 2nd leg. Mia Keranen was the 3rd leg of the relay, splitting 50.92. The Golden Grizzlies finished in 3:21.23, touching first by almost 4 seconds.

IUPUI freshman Logan Kelly completed his sweep of the men’s breaststroke events, taking the men’s 200 breast in 1:55.16. As was the case in the 100 breast on Friday, Kelly broke the Horizon League meet record with the performance. Despite the two event wins and two meet records, Kelly didn’t earn men’s Freshman of the Year honors. Instead, that award went to Oakland’s Jonas Cantrell, who won the 500 free. As best I can tell, Cantrell won the award despite Kelly winning more events because Cantrell finished 2nd in the 200 free and 3rd in the 1650, giving him a higher point total than Kelly, whose other individual event was the 200 IM, where he finished 11th.

Oakland’s Marko Khotynetskyi posted a dominant win in the men’s 200 backstroke, finishing in 1:41.63. The swim broke both the meet record and Horizon League conference record. The performance helped boost him over the edge to win men’s Swimmer of the Meet.

What’s the difference between athlete of the year and swimmer of the year? Especially since a different swimmer won each on the mens side

It’s athlete of the year vs. swimmer of the MEET. One is based on the whole season, one is based on just the results of this MEET.

Seems like an odd distinction to make. Must just want to give more awards out