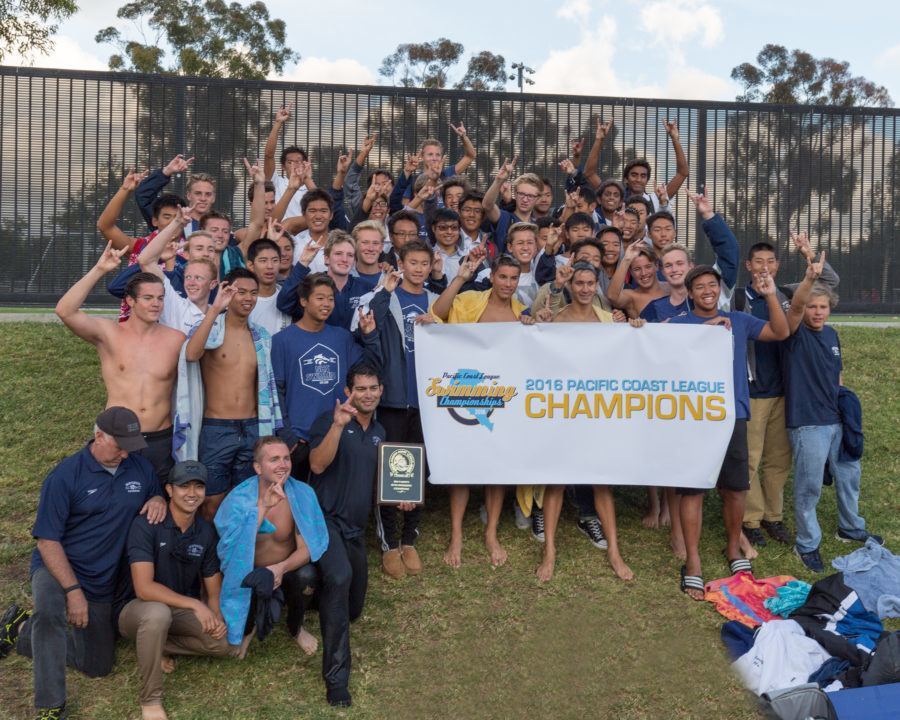 The Pacific Coast League is one of the most competitive high school leagues in California’s Southern Section, and it swimmers had the crowd on their feet on Friday night at the championship final at Woollett Aquatics Center. After years of dominance from Irvine’s University High and Newport Beach’s Corona del Mar, it was Irvine’s Northwood High at the top of the 2016 boys’ leaderboard with a sweep of the Varsity, JV, and Open league titles.

The writing may have been on the wall from the opening event for the Northwood boys; their runner-up performance in the 200 medley relay broke a 2012 school record by .14, beginning a run that earned them three individual event titles and wins in both free relays, as well as a slew of school records.

Sophomore Hunter Hitchens participated in three of those record-breaking performances, beginning with the first individual event, the boys 200 free. Hitchens got out to an early lead over University junior George Horvath, building up a half body-length margin by the 100 wall. Although Horvath, who notched a PB by 1.5 seconds, outsplit Hitchens by .10 over the final 100, it wasn’t enough to make up the difference. Hitchens went 1:40.47 for first; Horvath finished with 1:40.97 for second. It was Hitchens’ third-best performance ever, and it took down the 10-year-old Northwood school record by .40. Hitchens followed up with a win in the 100 free over teammate Cameron Hseih, 46.42 to 46.74, and was also on both Northwood’s first-place free relays.

Corona del Mar scored consistently all afternoon to keep the contest close. They finished second to Northwood in the 200 free relay, and had runners-up in the 50 free (Jon Polos, 21.87) and 100 breast (Ryan Schildwachter, 58.07). Micah Kamai of Irvine won the 100 breast with 57.98. Woodbridge finished third in both freestyle relays.

Congrats to the Northwood High School swim team. It appears they have the nucleus for an outstanding showing next week at the Southern Section CIF Championships.

These guys are the reason I love swimming so much. So proud to call each of them teammates and friends.