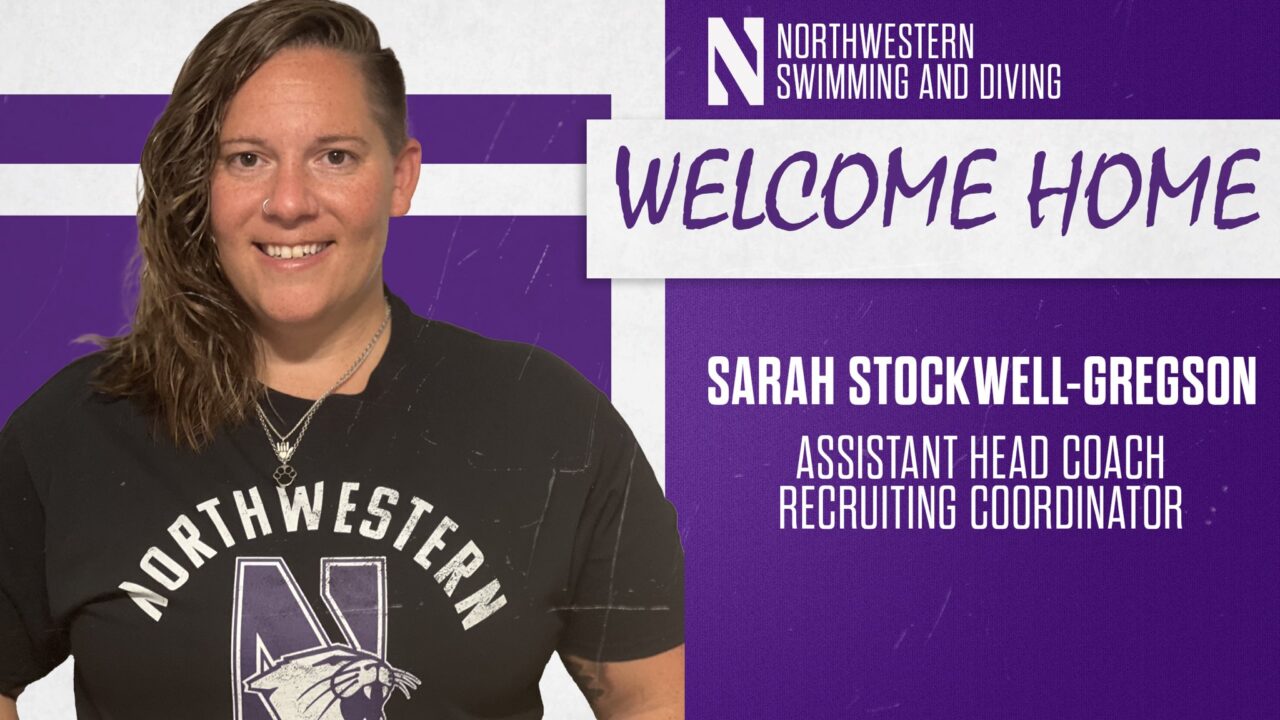 Stockwell-Gregson comes to Northwestern with 12 years of collegiate coaching experience under her belt. Current photo via @NUSwimDive on Twitter

Northwestern has announced the hiring of Sarah Stockwell-Gregson as assistant head coach and recruiting coordinator. Stockwell-Gregson most recently served as the director of recruiting for the University of Iowa men’s and women’s teams before the programs were eliminated in 2021. The women’s swim & dive team was subsequently reinstated, but Stockwell-Gregson didn’t return to her position.

Please join us in welcoming Sarah Stockwell-Gregson to the Wildcat Family. Sarah will serve as Assistant Head Coach and Recruiting Coordinator. See below to hear from our Director of Swimming and Diving Katie Robinson #b1gcats pic.twitter.com/MHpZl27EbF

Stockwell-Gregson comes to Northwestern with 12 years of collegiate coaching experience under her belt. She began her coaching career at Indiana, where Stockwell-Gregson also swam collegiately and was an 8-time NCAA All-American. She began her coaching career as a graduate assistant strength and conditioning coach for IU, then moved to the role of volunteer assistant swim coach in the following season.

Stockwell-Gregson was hired as an assistant coach at Virginia Tech for the 2011-2012 season, where she would end up serving for 7 seasons. During her time at Virginia Tech, the Hokies had 46 All-American or Honorable Mention All-American swimmers, as well as 16 ACC Champions.

Following her 7-year stint at VT, Stockwell-Gregson moved to Iowa, where she served as an assistant coach, as well as the director of recruiting. Iowa’s program was flourishing prior to the announcement the school would be eliminating the programs. During the 2019-2020 season, Stockwell-Gregson’s last, Iowa had a record-breaking season, seeing 12 program records fall, and both the men’s and women’s highest Big Ten finishes since 2012.

The new position marks a step up for Stockwell-Gregson in her career. She’ll be serving in a familiar capacity: recruiting coordinator, but will also be assistant head coach. The hiring of Stockwell-Gregson comes after Northwestern lost two of it’s assistant coaches this offseason. Ignacio Gayo was named associate head coach at Ohio State, while Milana Socha has been named the new head coach of Dartmouth.

Speaking on the hire, Northwestern head coach and director of swimming & diving Katie Robinson said in part “Throughout the interview process Sarah impressed us all with her student-athlete first and growth mindset, vibrant energy and confident sense of self. We can’t wait for the year ahead with her on board.”

Stockwell-Gregson earned a Master’s degree in kinesiology from Indiana in 2011.

Sarah is both an outstanding coach and person! She did a wonderful job at IU and will do great things at Northwestern!

Congrats to Sarah and a great hire by Katie! Well done!

She was a grad assistant when I was at IU. She did a great job then, and I’m sure she’ll do well at NU.

Sarah was most recently the Director of Operations at Indiana. She will be missed by the swimmers and divers. Best of luck Sarah!