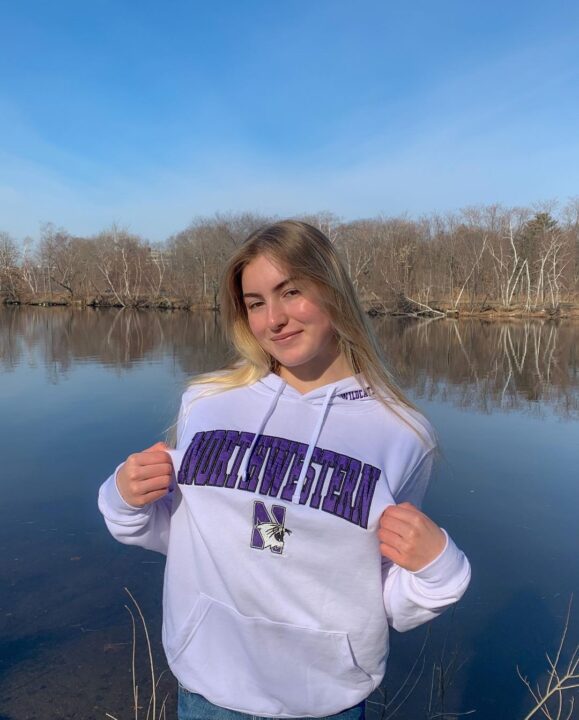 Leah O'Connell of Boston Area Diving specializes in the 3-meter event where she earned 3rd place at the 2021 USA Diving Zone A Championships. Current photo via Leah O'Connell

Leah O’Connell has verbally committed to continue her academic and diving career at Northwestern in the fall of 2023.

“I’m extremely excited to announce my verbal commitment to continue my athletic and academic career at Northwestern University! Thank you so much to my family, coaches, and friends for their support. Can’t wait to become a wildcat 💜 GO CATS!!!”

O’Connell’s specialty is 3-meter where she placed 3rd at the 2021 USA Diving Zone A Championships while competing for Boston Area Diving under coach Joe Chirico. There, she also made finals on 1-meter where she finished 7th.

She placed 2nd on both 1-meter and 3-meter at the USA Diving Junior Region 1 Championships that year with personal best scores of 420 and 465 points, respectively. At the 2017 Junior Zone Championships, O’Connell finished 3rd in the girl’s 12-13-year-old 3-meter event while training with Charles River Diving.

Northwestern’s third-year divers had a strong showing at the 2022 Big Ten Championships. Markie Hopkins took 3rd place in the 1-meter B, and 4th place in both the 3-meter and platform B finals. Her fellow junior Jaye Patrick won the platform B final. The Wildcats’ divers contributed 84.5 points out of the team’s total 919.5 points at the 2022 Big Ten Championships.

O’Connell is set to make an impact on the Wildcats’ team as an underclassman, especially because the entirety of the women’s diving squad was upperclassmen this season. This included two seniors and four juniors.

Northwestern women are coming off a 5th place finish at the 2022 Big Ten Conference Championships under head coach Katie Robinson. This is Robinson’s first recruiting class after being promoted to head coach in 2020. Diving coach Kris Jorgenson is entering his third season at Northwestern and he brings his own experience to the coaching staff; he won 12 Norwegian national diving championship titles during his time as an athlete.