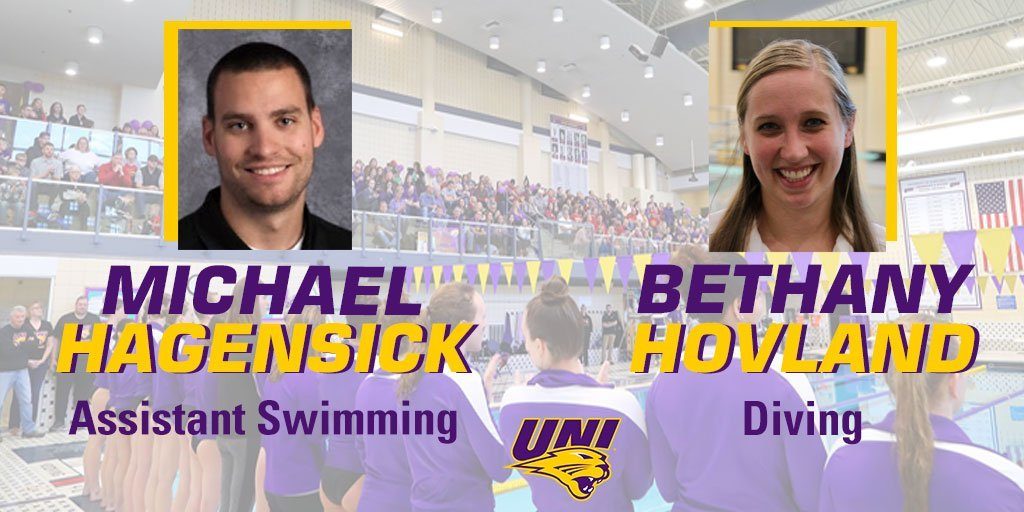 The University of Northern Iowa has hired 2 new coaches, Michael Hagensick and Bethany Hovland, to join its women’s swimming & diving staff. Hagensick will serve as the swimming assistant, while Hovland becomes the diving coach.

Hagensick graduated from UNI in 2012 with a d egree in elementary education. He didn’t swim there (the school doesn’t have a men’s swim team), but served as an assistant senior coach with the Black Hawk Area Swim Team (BLAST) for 10 years, and was the head coach at both Waterloo West and Cedar Falls High Schools.

“We are absolutely thrilled to bring Mike onto the staff here at UNI,” head coach Nick Lakin said. “He has a long history of developing great athletes at the club and high school level and will bring a wealth of knowledge across many disciplines to his position with us. His energy, passion and enthusiasm for learning and swimming will be a huge asset.”

Hovland is also an alumni, diving for the Panthers from 2009-2013. She still holds the 1-meter and 3-meter school records and was the 2011 Missouri Valley Conference Champion on the 1-meter. In High School, she was a two-time Iowa High School State Champion and earned All-America status in 2009. She’s the founder and head coach of the Cedar Valley Diving Club.

Any time you can bring back a school record holder on both boards with a history of developing athletes, it is a huge hire,” Lakin said. “Bethany has shown she knows what it takes to compete at the MVC and Zone level, and we can’t wait to see the progress of all the divers in the coming years.  She has a huge vision of what UNI swimming and diving can become, and we can’t wait for her to get started.”

Both new coaches have Northern Iowa degrees in elementary education and master’s degrees from Morningside College.