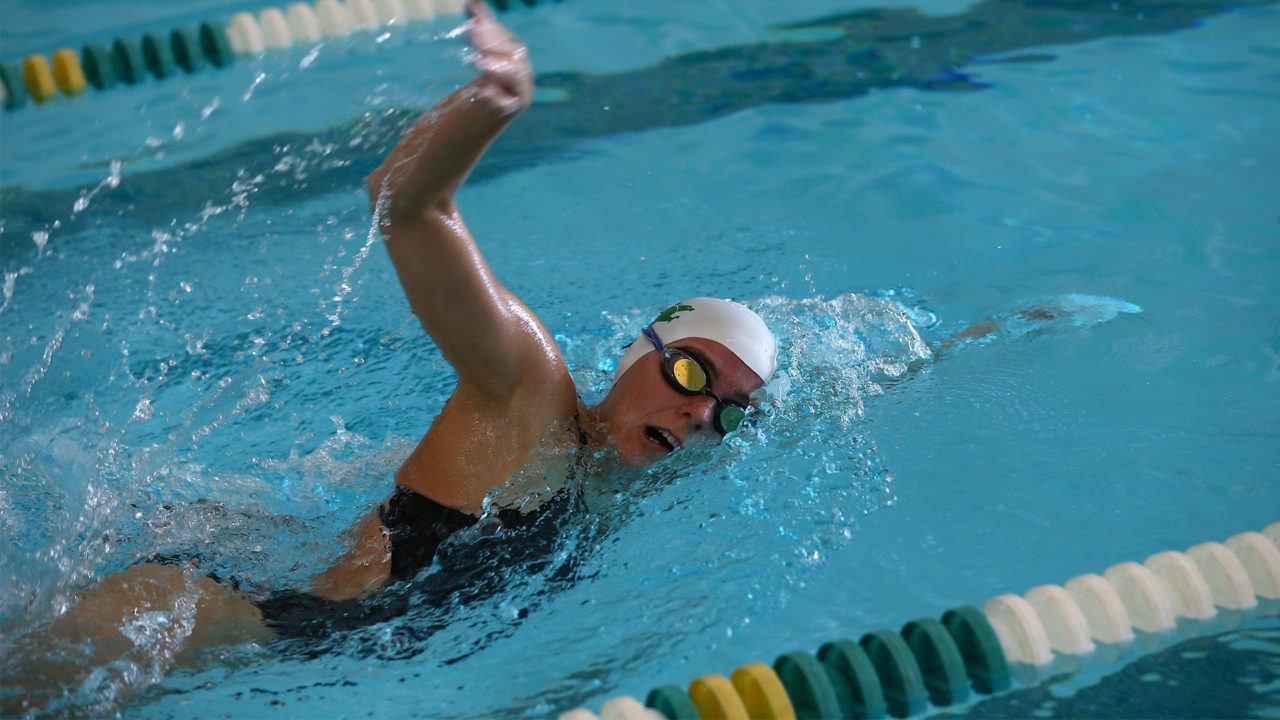 In the 17-edition history of the Rice vs. North Texas women’s swimming & diving rivalry, Rice University has usually come out ahead of their Conference USA rivals. Usually.

On Friday, January 11th, the University of North Texas downed Rice University for only the 4th time in the program’s history, with the other victories coming in 2015, 2011, and 2010. Here’s how they did it:

In this women’s-only competition, the Mean Green from North Texas won both the 400 medley relay in 3:40.88 and 200 freestyle relay in 1:36.68. Though splits are unavailable, the margin of victory in the 200 freestyle relay was a comfortable 1.35 seconds, meanwhile the margin in the 400 medley was a whopping 11.81 seconds, where the ‘A’ team from Rice finished 2nd in 3:52.69. The times clocked by both relays are very good for UNT, considering their season best in the 200 free relay stands at a 1:34.24 from the Kansas Classic, while their 400 medley relay was a mere 3:46.97 prior this weekend’s racing.

Another member of that medley relay, Meaghan Rousset, posted a very solid 1:03.98 to win the 100 breaststroke. Rousset’s time is impressive not only because it is the fastest she’s been yet this season, but because it’s faster than she went at the 2018 Conference USA Women’s Championships last February. Last year, Rousset finished 16th in the 100 breast at the C-USA Championships, where it took a 1:03.03 to make the ‘A’ final. Even in early January, she’s already within a second of that mark.

Thurstin, who was also a member of the champion 400 medley relay, notched an individual victory in the 50 free in a time of 24.37 seconds, which she followed up with a 2nd-place finish in the 100 fly, registering a time of 57.66 seconds. Though neither swim was close to her season-best, she has also already secured her spot at the CSCAA National Championships in March in the 50 free, 100 fly, and 100 breast.

UNT also dominated diving where, uncontested, the Mean Green swept both the 1-meter and 3-meter boards with Averie Ruiz picking up the set of victories, followed by teammate Meghan Miller in 2nd on each board. Although Rice doesn’t have divers, the 32 points that North Texas scored there aren’t enough to account for the 44-point overall difference in scoring.

DENTON – North Texas swim and dive started 2019 off much like how it ended 2018 – with a win over an in-state power program.

The Mean Green defeated Rice 169-125 on senior night Friday at the Pohl Rec Center first the first time in six years. The Mean Green won both relay events in the first and final events of the day while also taking home five individual first place finishes.

“The last time we beat them was my first year here,” head coach Brittany Roth said. “On that particular day, our girls made the decision that they were going to get up. [Friday] was a great rehearsal. I told them that we will face Rice again in a month. I told them you can’t back down. You have to attack every single race, and if you do that it could be a great meet. From one event to the next they never let the momentum stop. They never got comfortable. They knew what was at stake. I’m feeling really encouraged.”

Thurstin and Ruiz won events in their final home meet as Mean Green. Thurstin took home gold in the 50-yard freestyle with a time of 24.37. She was the only Mean Green team member to podium in the event earning her squad nine points. Ruiz won both 1-meter and 3-meter diving.

“Every year this team evolves,” Roth said. “To have this team as it is right now, is really special. I’ve enjoyed not only this season with them, but the entire careers here. These girls went from freshman who are unsure of themselves, looking to upperclassmen, to now giving speeches to their teammates and imparting great wisdom on them. I am really going to miss them. They are going to leave a big hole on this deck.”

Sophomore Leigh Faires McGee continued her strong season with a win for the second meet in a row in the 1000-yard freestyle with a time of 10:21.54. Sienczyk won the 100-yard backstroke with a time of 58.09 to grab nine points. The rest of the Mean Green finished 4-5-6 to earn three more points.

Sienczyk and Kwiatkowska came second and fourth respectively in the 200-yard backstroke to earn North Texas six points. Sienczyk clocked in at 2:06.54 while Kwiatkowska hit 2:10.32.

DIVING
North Texas competed with four divers in 1-meter and 3-meter diving. Rice did not travel with divers. In 3-meter, Ruiz was tops with a 255.98 while sophomore Meaghan Miller came in behind her at 248.78. Freshman Altaria Wallquist rounded out the top three with a great dive of 231.00. Junior Gabryella Silva was the drop score at 227.63.

“Winter training went in the right direction for us,” diving coach Mark Murdock said. “So they stepped in right away and continued that. I thought they did really well. They pushed more. Not having to compete against anyone was actually ok. They pulled together and competed well, because it was a competition. They have to push and get better.”

The Mean Green return to action on Jan. 26 against Incarnate Word and Old Dominion in a double-dual meet in San Antonio.

Sophomore Ellery Parish won a pair of individual events, and the Owls were on the top of the medal stand six times overall, but North Texas claimed a 169-125 Conference USA dual meet victory over the Rice swimmers Friday evening in Denton, Texas.

The Blue & Gray still has two more key meets coming up on the weekend road swing. Rice next takes on former conference rivals SMU and Arkansas on Saturday in Dallas at 11 am.

Do you believe in the Mean Green?!

Since NT has won 4 times since/including 2010…my math tells me recent history is closing in on 50/50. What was “rare” in the past seems more like more of a solid rivalry now…even if not fully on the same level.

0 divers for Rice. That hurts.

As Reid pointed out in the article, though, North Texas didn’t score enough diving points (32) to close the gap (44), so this was an apples-to-apples win in addition to being an apples-to-ground apples win.