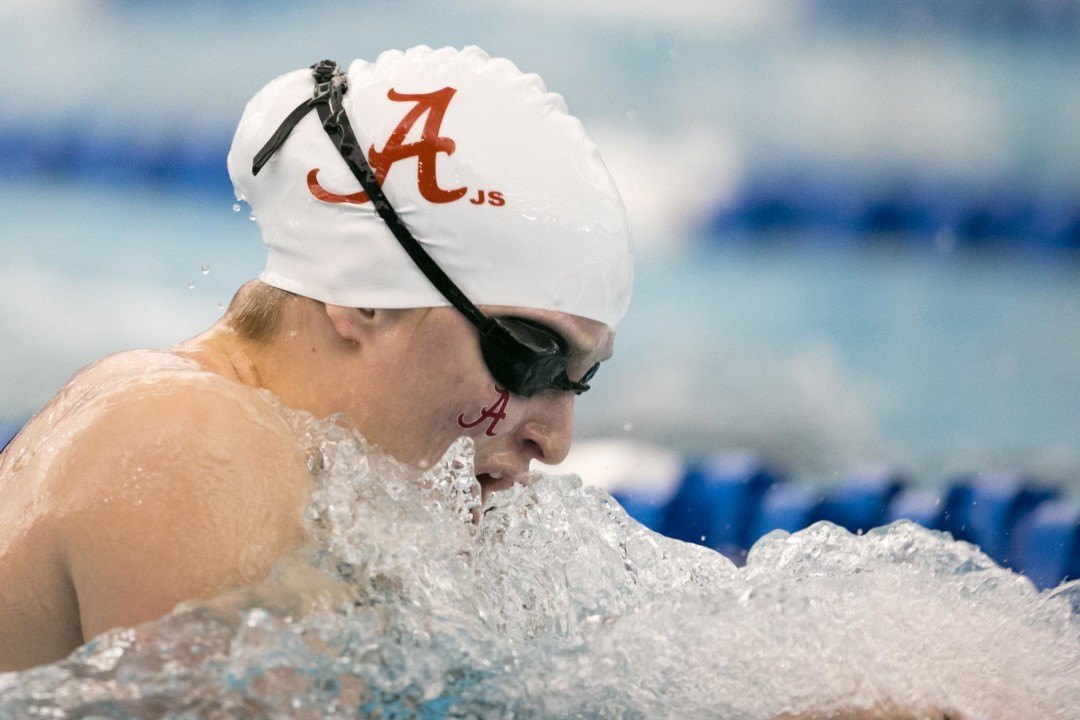 The Alabama Crimson Tide were without two-time NCAA champion Kristian Gkolomeev in the NCAA's 2015-2016 season opener, but didn't miss a beat, sweeping all 28 swimming events to top Delta State on the road. Archive photo via Tim Binning/TheSwimPictures.com

The Alabama Crimson Tide were without two-time NCAA champion Kristian Gkolomeev in the NCAA’s 2015-2016 season opener, but didn’t miss a beat, sweeping all 28 swimming events to top Delta State on the road.

Romanov went 55.43 in that race, building a three-tenth lead at the 50-turn but really powering away late to win decisively. Fraschi, an NSISC co-Swimmer of the Year last season, was 56.80, which isn’t a bad place to start the year either.

Beyond that, Alabama’s stars pretty much rolled, though not always in their signature events. Star backstroker Connor Oslin jumped into the 100 fly and took the win, going 49.28. NCAA qualifier Christopher Reid won the 100 back (his time was not available) over last year’s freshman sensation Luke Kaliszak. Relay All-American Brett Walsh went 20.54 to take the 50 free.

Both of the sprint free races were great ones. Walsh topped Delta State’s Mattia Schirru by three tenths there, but after the diving break, Schirru came back to give Alex Gray a run for the 100 free title. Schirru went 45.57, but Gray just got the touchout win at 45.50.

The big absence of the meet was NCAA champ Kristian Gkolomeev in those sprints. The Greek sprinter did not appear on the results, but is still listed on the Alabama roster. It’s not uncommon for teams to hold out their stars in the early season, especially when they are coming off of a big summer season internationally. We saw the same thing with Arizona’s Kevin Cordes and Brad Tandey for much of last fall.

The women’s meet had more multi-event winners and was even more lopsided, with Alabama winning every single event in a 1-2 or better.

Nonnenberg, a sophomore and returning NCAA qualifier, started off her night with a narrow second-place finish behind Saunders in the 200 free, 1:51.24 to 1:50.40. But just a few events later, Nonnenberg would win a tight 200 fly battle with teammate Hannah Musser. Nonnenberg was 2:01.03, Musser 2:01.87.

Should be noted that both teams are in heavy START UP mode, and good times hard to achieve. Shout out to the Top Placing DSU swimmers….

Hey great! I see Delta has a new, up and coming freshman sprinter. And he’s only 23.

Really? Way to state the obvious!

If it’s so “OBVIOUS”, why are you fixated on the AGE of the “…new, up and coming freshman sprinter.” at Delta State, and not the impressive early season TIMES he posted?

Girls and boys become women & men when they graduate from high school Dad, and if they go to college to participate in intercollegiate athletics, they compete against other women & men of all ages throughout their 4-5 year eligibility period.

Besides, an 18yo freshman, with a birthday between August and March, will be a 23yo SR at NCAA’s. What is the difference between that 23yo swimmer and a 23yo “…new, up and coming freshman…”?

Lil Johnny is a man now Pops! Complaining, or even bringing attention to “age”,… Read more »

Agree with Braden – keep it civil – but c’mon Dad – not sure what the age issue is here? Seeing many swimmers holding on for longer careers and think that is great for the sport. Wish that was possible when I could still do 4 laps ….

Has no one bothered to inquire as to where the number 2 ranked recruit out of women’s class of ’13 has disappeared to? You know…the former Aussie national open water champ..?

She is taking a year off from swimming.

Unfortunate all around but it seems dishonest to keep the scholarship whilst being unable to swim anywhere near the cv she was chosen on . It is totally fine to be a junior star & no longer be elite but it should be on your own dime .

Ok good luck for her personal time . But I think if you need to leave the sport do it cleanly with a crisp good bye rather than hangin on .