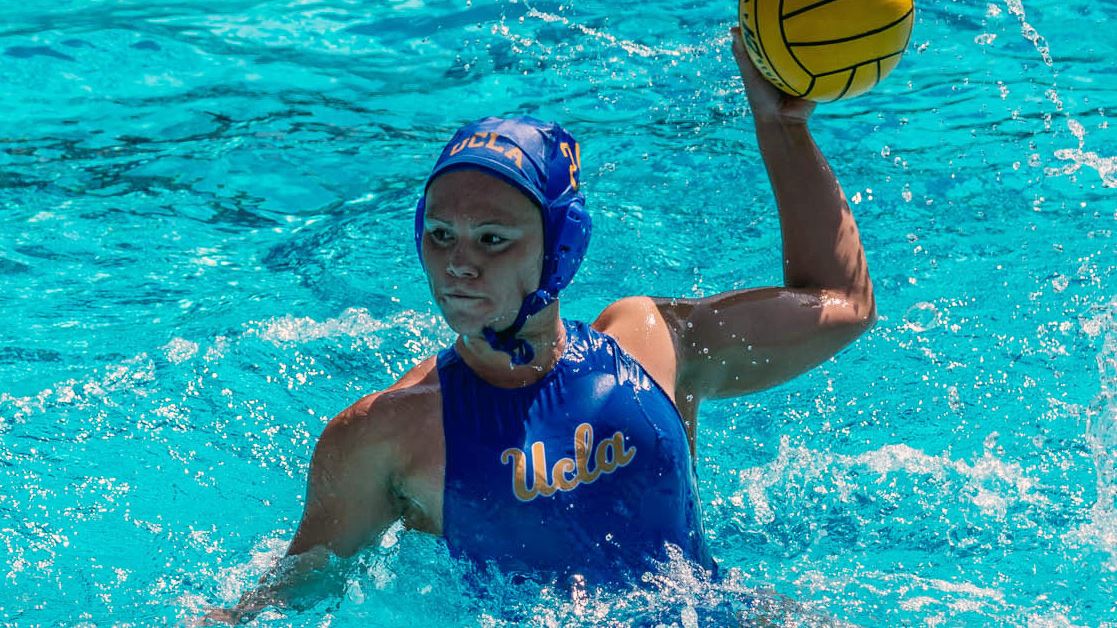 UCLA rallied from a two-goal deficit in the third period to remain undefeated on the year with a 9-8 win over California on Sunday morning. Current photo via Minette Rubin

LOS ANGELES — No. 2 UCLA (4-0, 2-0 MPSF) rallied from a two-goal deficit in the third period to remain undefeated on the year with a 9-8 win over No. 6 California (5-2, 0-2 MPSF) on Sunday morning at Dirks Pool at Spieker Aquatics Center. The Bruins improved to 61-13 all-time against the Golden Bears with their fifth straight win over California.

Junior Ava Johnson tied for game-high scoring honors with a hat trick while senior Lexi Liebowitz had two scores, including the game-winning goal in the fourth period. Senior Jahmea Bent got the start in the cage and went the distance, tallying eight saves while allowing eight goals.

Johnson got the Bruins on the board first with a power play goal (4:32). Junior Bella Baia then broke a 1-1 tie with a nearside goal (3:54) to put the Bruins back in front. But California scored two unanswered goals to lead 3-2 at the end of the first period.

The Bruins were held scoreless in the second period while holding the Golden Bears to just one score and trailed 4-2 at the break.

Johnson got the Bruins immediately on the comeback trail in the third with a powerful goal at set (7:38). After a goal by the Golden Bears, junior Katrina Drake found the back of the net on a power play (4:58) to pull to within one at 5-4. Liebowitz netted her first of the game to tie it at 5-5 (3:23). After Cal regained the lead, sophomore Hannah Palmer walked it in and scored (0:52) to tie the game at 6-6 heading into the fourth.

UCLA returns to action on Saturday, Mar. 27 when it travels to Stanford. Game time is still TBD.

The Bears (5-2, 0-2 MPSF) matched up well with the Bruins after losing 11-5 to UCLA on Saturday. Cal held the lead for over half the game and never trailed by more than one goal. The Bears led 4-2 at halftime and 5-3 midway through the third quarter before UCLA came back to tie it.

Protopapas’ final goal put the Bears back in front 7-6 early in the fourth quarter, but the Bruins scored two in a row to go in front for the first time since midway through the first period. Cal sophomore Shea Salvino tied the game at 8-8 with 3:41 to play, but UCLA registered the game-winner at the 1:03 mark of the fourth quarter.

Cal had one final chance to tie the game on a power play, but a shot by Brigit Mulder was stopped by UCLA goalie Jahmea Bent and the Bruins ran out the clock.

The Bears are back in action next weekend when they host No. 1 USC on Saturday and Sunday at Spieker Aquatics Complex.