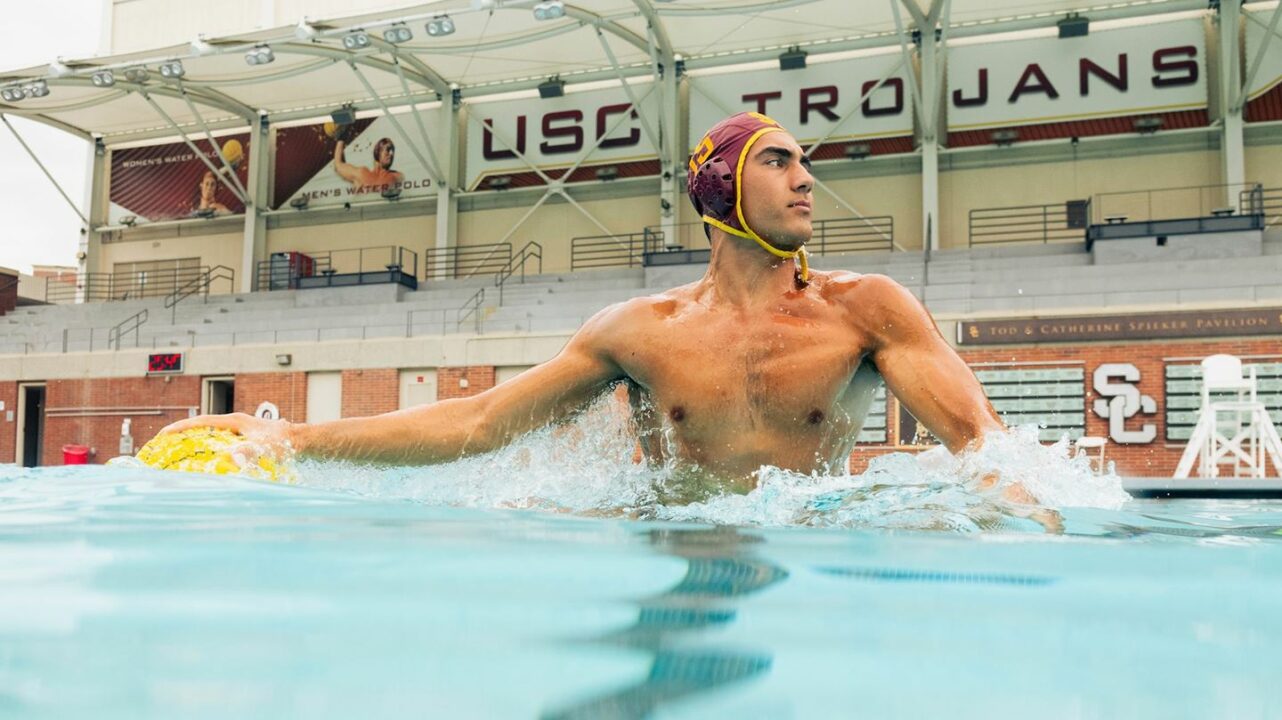 The top-ranked and undefeated Trojans (10-0) will host No. 6 Pacific (5-6) at 1 p.m. on Saturday (Oct. 2) at Uytengsu Aquatics Center. Current photo via John McGillen

THIS WEEK
No. 1 USC is back in home waters this weekend after a long stretch of road work. The top-ranked and undefeated Trojans (10-0) will host No. 6 Pacific (5-6) at 1 p.m. on Saturday (Oct. 2) at Uytengsu Aquatics Center.

RANKINGS
USC started this 2021 season ranked No. 2 in the national preseason poll and No. 1 in the MPSF Coaches Poll. As of Sept. 15, USC moved up into a tie at No. 1 in the land before dropping back to No.2 on Sept.  22. In this latest set of national rankings (released Sept. 29), USC has taken over as the No. 1 team in the nation.

LAST WEEK
USC pinned up three strong performances en route to winning the MPSF Invitational championship last weekend in Berkeley, claiming wins over UC Davis (13-8), Stanford (15-13) and host Cal (12-11). USC never trailed on Saturday, hitting the turbo boosters in both games to create some space and haul in two wins. A pair of three-goal surges helped put No. 7 UC Davis out of reach en route to a 13-8 win over the Aggies in the morning. That put the Trojans in the semifinals against No. 3 Stanford, which saw USC hit the gas in the first half with a four-goal rally that built a seven-goal advantage for USC before things tightened up to a final 15-13 Trojan win. USC had the first and last words in the championship game. Ashworth Molthen broke ground on the offensive end to open things up, finishing with a team-high three goals for the Trojan cause. And goalie Nic Porter capped off an impressive performance in the cage with one final save to squash any Golden Bear hopes of forcing overtime. Porter would wind up with a whopping 14 saves in the championship win. The score was tied up seven times, with Cal holding one-goal leads on two occasions in the third frame before USC created some crucial breathing room in the fourth period. Cal had knotted things up at 8-8 early, but USC responded with a booming 6-on-5 finish from Carson Kranz off a feed from Jacob Mercep to go up 9-8. Then, Porter stuffed a Cal 5-meter penalty shot to give the Trojans a huge lift. Mercep catapulted a long-range strike through to make it 10-8, and then Porter notched another save against a Cal power play. On the attack again, Kranz found Jake Ehrhardt for a laser that gave USC its largest lead, up 11-8 with  3:45 to go. Cal would find a quick reply, only to see Hannes Daube get USC up on a 6-on-5 next. He’d finish it off himself, taking a pass from Mercep and burying it to get USC ahead 12-9 with 3:05 on the clock. The Bears carved their deficit down to one less than a minute later, but the USC defense dug in for the final stretch. Two more Porter saves sandwiched a huge field block from Marcus Longton against a late Cal 6-on-5, and USC emerged victorious with the 12-11 decision.

BY THE NUMBERS
After four weeks of action, Jacob Mercep leads USC’s scoring charge with 30 goals, followed by  Marcus Longton with 21, Jake Ehrhardt with 18 and Hannes Daube with 16. On the defensive end, four goalies have shared time in the cage. Senior Nic Porter and redshirt freshman Blake Jackson have logged the majority of the minutes, with Porter holding 81 saves in 28 periods of work, while Jackson has 20 saves in nine frames of action. Porter has already notched four double-digit save performances this year, and Jackson has one. All told, USC’s goalkeeping corps is averaging 11.2 saves per game. As a team, USC has outscored its opponents 172-70 for an average of 17.2 goals per game offensively and 7.0 goals-against per game defensively. The USC defense has held opponents scoreless in five periods.

ON THE RISE
Several Trojans are making moves up the career charts this season. Jacob Mercep leads the way, having risen to No. 5 all-time at USC with 182 career goals as a Trojan — eight shy of the No. 4 spot. On Sept. 18, both Hannes Daube and Jake Ehrhardt scored their 100th career goals. Redshirt junior Daube now holds 110 career goals, and senior Ehrhardt has 107. On the defensive end, senior goalie Nic Porter recently took over the No. 8 spot in career saves by Trojans, and now hold 557 saves. He’s also now registered 28 double-digit save outings as a Trojan.

PORTER PICKS UP MPSF HONORS
Senior goalie Nic Porter anchored a powerful Trojan effort last weekend, amassing 33 saves en route to the USC men’s water polo team’s championship win at the MPSF Invitational in Berkeley. For his dominant defensive effort, Porter is the first Trojan to be named MPSF Player of the Week this season. It’s the third such selection for the Aussie native in his USC career. Porter averaged 11.0 saves per game in USC’s run to the MPSF Invite championship. He topped out with a season-high 14 saves in the title match, turning away a 5-meter penalty shot in the fourth period for a key boost en route to the Trojans’ 12-11 victory over host No. 3 Cal.  Porter had opened the event with 10 saves — including a 5-meter penalty stop — in a 13-8 win over No. 7 UC Davis to help push USC into the semifinals. There, Porter notched nine saves and had two steals in USC’s 15-13 win over No. 3 Stanford.

FULL FORCE
Only two members of the 2020 NCAA Tournament roster are gone, while USC welcomes in a trio of U.S. National Team players — all three already All-Americans with NCAA Tournament experience — who had been training overseas. Those bodies include some heavy-hitters, with USC’s top scorer the past three seasons — Jacob Mercep — back for more and joined by Olympians Hannes Daube and Marko Vavic. Add to that the firepower of National Teamer Ashworth Molthen, a transfer from UCLA, along with senior sharpshooter Jake Ehrhardt, and USC’s attacking power is downright formidable. USC’s danger zone on the left-hander side is markedly deep, with Mercep and Molthen joined by junior Marcus Longton — another proven power on the perimeter.

DEPTH CHARGE
Even more versatility flows from a batch of Trojans who saw key playing time during their first season at USC. Now sophomores, it’s well known that Carson Kranz, Max Miller, Tony Nardelli and Tom McGuire can pack some scoring punch. Also in his second season as a Trojan is grad student Wyatt Barker, who developed into a daunting two-meter presence and is back for more in 2021. More returning skill is seen in Chris Sturtevant, Stefan Vavic and Joshua Waldoch, with the highly anticipated addition of Croatian freshman Luka Brnetic sure to cause a stir for the Trojans.

LEADER BOARD
From a leadership standpoint, USC also leans on some stalwarts. Olympian Marko Vavic brings back a breadth of experience from his travels, joining a set of strong senior guidance from Alexander Lansill, Nic Porter, Ehrhardt and Mercep. Porter’s voice is particularly powerful, as he is set to cap up in the cage for his fourth season manning the Trojan goal. The All-American Aussie is the backbone of the Trojan defense and, along with the rest of his Trojan seniors, is determined to finish 2021 with another NCAA Championship ring to go along with their 2018 title.

CAGE FIGHTERS
Nic Porter has some talented young goalies by his side this year, with redshirt freshman Blake Jackson blooming into a contender for significant playing time. Garrett Allen also returns to the cage, with two new Trojan goalies also in the mix in Pepperdine grad transfer Kyle McKenney and true freshman Eric Hubner. Already this season, three goalies have seen their first minutes as a Trojan in Jackson, Allen and McKenney.

PINTA’S PROGRAM
Marko Pintaric, who has been part of 14 NCAA championships during his 20 years on the USC coaching staff, is in his third year at the helm of the Trojan water polo program. Last season on the men’s side, he guided the Trojans to a 16th consecutive NCAA appearance, reaching the NCAA final for the 15th time in that span. Pintaric was named head coach of the USC men’s and women’s water polo teams on August 29, 2019, replacing former head coach Jovan Vavic. An All-American and 1998 NCAA champion as a player at USC, Pintaric served as co-head coach for the USC men for the past three seasons (2016-18), most recently helping the Trojans to the 2018 NCAA Championship. His USC coaching career began as an assistant coach to both the USC men and women in 2001. Pintaric stayed in a dual coaching role until NCAA rules for coaching staff sizes changed in 2015-16, prompting a move to a scouting director role with the women while his assistant coaching role continued with the men for the next four years. Starting in 2021, Pintaric has a full coaching staff at his disposal, with assistant coaches Connor Virjee and Jeremy Davie on the men’s staff.

LAST SEASON
Due to the COVID-19 pandemic, 2020 men’s water polo competition shifted to the spring and featured a condensed schedule for MPSF teams. USC was ranked No. 1 to open the competition, which comprised three Round Robin events among MPSF teams and a single nonconference meeting for USC against Pepperdine. The Trojans would post a 3-7 record in those MPSF meetings, going on to take third at the MPSF Tournament and earning a 16th consecutive trip to the NCAA Tournament. USC would host the NCAA event, reaching the final for the 15th time in that 16-year span. The NCAA title match was a tight one, and USC would fall 7-6 to UCLA. In an abbreviated honor roll for 2020, three Trojans earned ACWPC All-America First Team honors — Jake Ehrhardt, Jacob Mercep and Nic Porter.