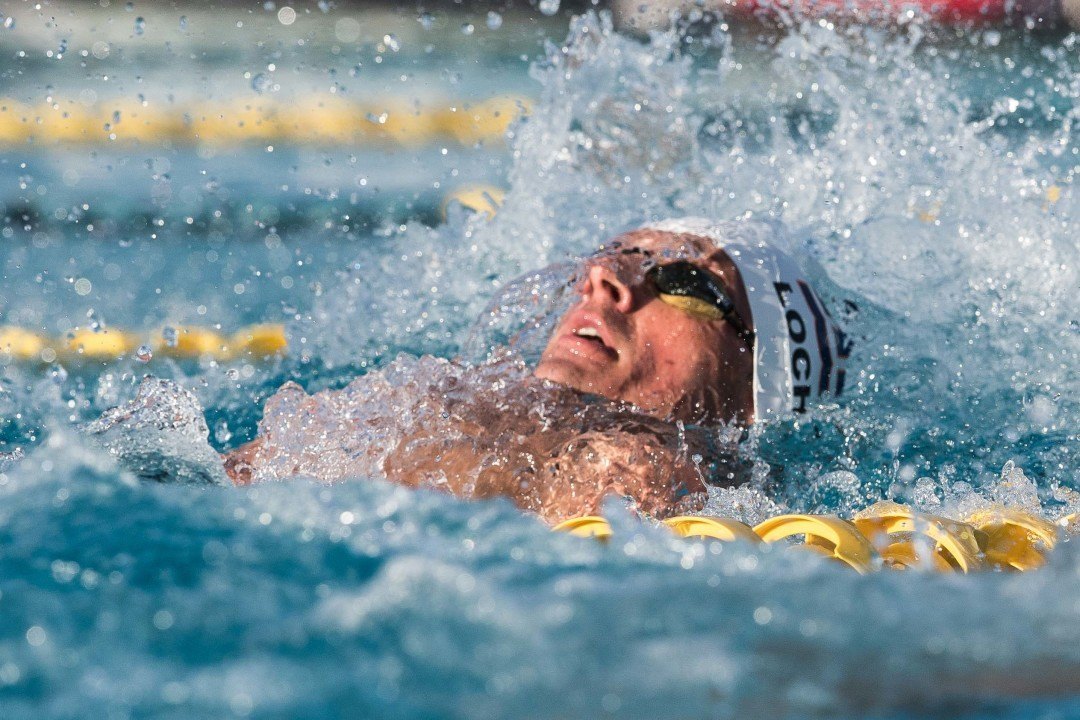 The NFHS has defined a rule for turns on IM and medley relay races that will maintain the spirit of the "unique stroke" rules without forcing swimmers to alter their flipturn technique on freestyle legs of those races. This change could set the tone for rules changes by other organizations in the future. Archive photo via Mike Lewis/Ola Vista Photography

The National Federation of High Schools (NFHS), which ultimately sets the rules for the vast majority of high school competition in the United States, has announced its new rules changes for the 2016-2017 scholastic season.

The highlight of those changes has to do with what has been deemed the “Lochte rule,” after famous American Olympic swimmer Ryan Lochte.

At last summer’s World Championships, Lochte won the world title in the 200 IM by swimming the entirety of the underwater on his freestyle lengths on its back. While there’s some ambiguity in the rules, FINA issued a clarification after-the-fact that this should have been a disqualification. That’s because in their opinion, a swimmer being on their back is considered swimming backstroke – a stroke allowed during freestyle competition, except in the final leg of an IM or medley relay, where rules require each of the four components to be unique.

An addition to NFHS Rule 8-2-4c will read as follows: “The final leg of the individual medley and the medley relay requires the swimmer to be at or past vertical toward the breast before any stroke, kick or propulsive motion.”

This is a middle-ground of sorts, that doesn’t require swimmers to have an entirely different flip-turn technique at the end of medleys as compared to their freestyle races, where most are coached to leave the wall on their backs.

The NCAA currently allows the “Lochte Turn,” while USA Swimming is still bound by the FINA rules on the matter.

Other Changes Approved by the NHFS:

To see the highlights of all of the proposed rules changes, including ones that were voted down, click here.

The whole thing is idiotic: Freestyle is “free and style.” Meaning you should be able to swim any way you want.

The strokes in a medley have never included freestyle. The final leg has always been “any other stroke.” Since the only requirement for backstroke is being on one’s back, it was not entirely unreasonable to conclude that kicking away from the wall on your back was legal backstroke and therefore a repeat of strokes.

We’re aware of the rule. But it’s a dumb rule. What’s the point? If someone really wants to close a IM race with butterfly, why should the sport prevent that?

I actually believe this makes more sense that the current FINA rule. Swimmers are taught to come off towards their back on free turns as an efficient way to execute “freestyle” turns. The FINA rule ignores this practice and requires a different turn for the “fourth” stroke. The HS rule does not required teaching two turns…one for free and another for the 4th leg of IM.

I agree. This is the wording that should be adopted across the board.

Locate rule language for HS is entirely based on the ability of two officials to make calls. Same as backstroke turn. Nothing to do with being a technique compromise, just writing a rule that is enforceable with a starter and a deck ref covering an entire pool.

Evan u seeing this bro?

LOL @ deck changing rule. I assume that means a girl could get DQ’ed for getting out of tight racing suit shoulder straps under a deck coat or jumper. The horror!

It’s been a rule in several state associations and facilities for a while now. It’s been interpreted by some LSCs and facilities are paramount to athlete protection. The last thing you need is a creeper in the gallery with a zoom lens filming an underage girl hoping she slips up trying to get her Jolyn top on under her fastskin.

If I am reading this correctly, a swimmer may actually glide off the wall on their back during freestyle of the IM or the 4th person on the medley relay, turn over on their stomach and then start the “stroke, kick or propulsive motion”? I suppose this gives novice swimmers a chance at completing an IM legally as well as competing in a relay.

5142 for those keeping score at home