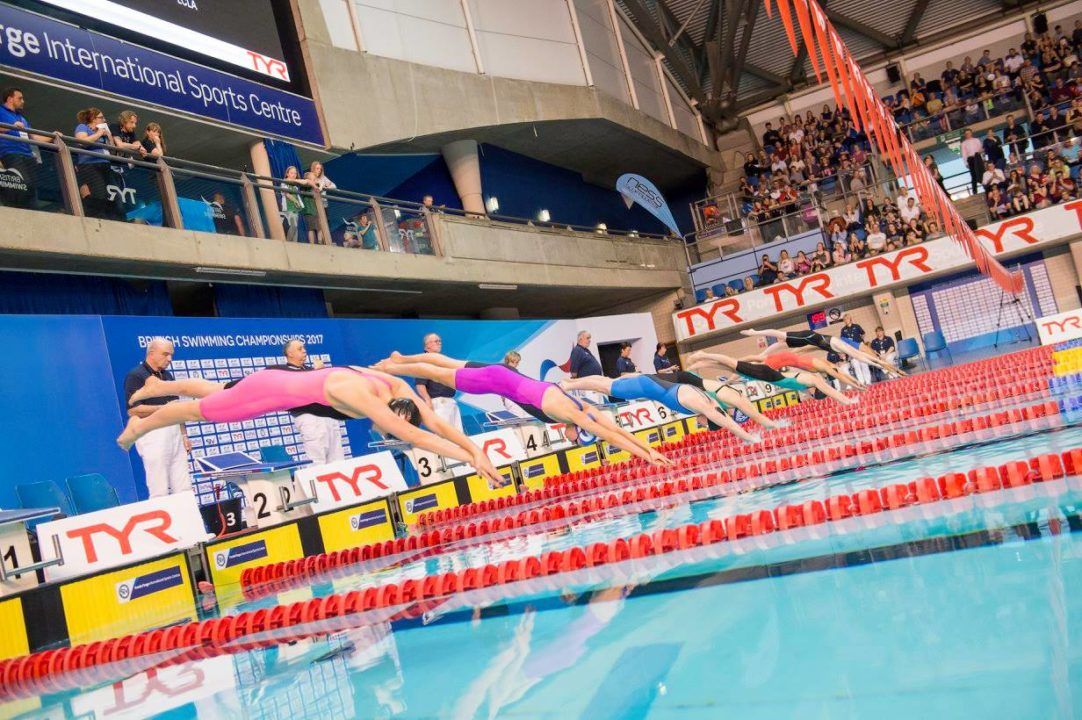 16-year-old Keanna MacInnes made her mark on night 1 of the Scottish Short Course Nationals, cracking one of Hannah Miley's senior national records. Archive photo via SWPix.com for Scottish Swimming

The 21-strong Scottish squad set for the 2018 Commonwealth Games in Australia has already been determined, but key competitors headed for the European Short Course Championships in Denmark next week will be tuning up in Edinburgh this weekend. Olympic medalist Duncan Scott, silver medalist in Budapest Ross Murdoch, and national record holder Kathleen Dawson are among those competing at the 3-day Scottish National Championships (SCM) this weekend at the storied Royal Commonwealth Pool.

Starting things on a swift note right off the bat was David Cumberlidge of Edinburgh, the 21-year-old who charged to the wall first in the men’s 50m freestyle final. After scoring the 3rd seed in 22.00 this morning behind tied Stirling teammates Calum Bain and Scott McLay, who both notched 21.94, Cumberlidge out-windmilled the pair in tonight’s race to stand atop the podium in 21.65.

Just last month at the BUCS Short Course Championships Cumberlidge clocked a time of 21.51, a mark which ranked him as the 6th fastest Brit of all-time. His outing tonight still places in Britain’s all-time top 10 performances.

Keeping the theme of speed going in the women’s 100m breaststroke was Scottish national record holder Corrie Scott, Cumberlidge’s squadmate at Edinburgh. Owning a personal best mark of 1:06.06 from 2016, Scott came within half a second tonight, touching in 1:06.24 for the gold in the only time under 1:07 of the entire field.

Behind her, however, was a pair of teens in South Ayrshire’s Katie Robertson and VFL’s Anke Geeroms. Robertson, just 16, notched a runner-up time tonight of 1:07.68 to lower her own sister, Erin’s, Scottish Junior Record that sat at 1:08.54. For her part, Geeroms registered a bronze medal-garnering effort in the race of 1:07.96, lowering the 17-year-old age group record  that was in the books at 1:08.14 from 2013.

A thrilling dual went down in the women’s 200m IM race, with Hannah Miley and Aimee Willmott trading places halfway through the race. Willmott got out to an early lead in the fly and back, but Miley turned it on in the breaststroke leg and managed to crank out a fast finishing freestyle effort to wind up on top in 2:08.16. Willmott finished less than a second behind in 2:08.93 to represent the only 2 swimmers to earn a mark under 2:10.

In one of his first races back in the water since finishing his drunk driving suspension, Edinburgh’s Dan Wallace fired off the win in the men’s 100m butterfly, taking the gold in 52.58. Although an IMer, Wallace rarely races the straight-up fly events, but his mark tonight shoots the 24-year-old former Florida Gator up to 7th all-time in the Scottish rankings. Right behind him in the race was City of Glasgow’s Sean Campsie, who finished in 52.80 for the 2nd best time of his career.

Wallace also topped the podium in the men’s 100m IM sprint at the end of the session, touching in 54.17 for the win.

Stirling training partners Ross Murdoch and Craig Benson went 1-2 in the men’s 50m breaststroke, separated by just .04 of a second. Murdoch got the upper hand in 26.98, while two-time Olympian Benson settled for silver in 27.04. Right behind the pair was another set of Stirling teammates in Zak Aitchison and Jamie Graham, who finished in 3rd and 4th places with respective times of 27.09 and 27.47.

Of note, 8th place went to Warrender’s Archie Goodburn, who at 16 years of age, set the new Scottish Junior Record in 28.05.

An explosive effort came in the form of 16-year-old Keanna MacInnes‘ winning mark of 2:07.90 in the women’s 200m butterfly. Her time tonight registers as a new Scottish National Record to set the stage of what may be to come for this young talent. Entering the meet, her personal best sat at the 2:08.79 she rocked at this same competition last year. But the teen blasted a second off of that effort to overtake even Olympian Hannah Miley in tonight’s race, with the Aberdeen swimmer finishing as the runner-up in 2:08.15.  Miley was the previous national record holder with her mark of 2:08.32 from the 2015 Short Course European Championships in Netanya, Israel, so she, too, went under the previous record battling MacInnes in Edinburgh tonight.

The women’s 100m freestyle race saw Edinburgh’s Lucy Hope come within striking distance of her own Scottish national record she set just last month at BUCS. Tonight she touched in 53.44 for the win, a mark that falls just .05 shy of her 53.39 stunner at Ponds Forge. Right behind Hope tonight was teammate Rachel Masson, who also scored a time under the 54-second threshold in 53.93 for silver.

Of note, Olympic medalist Duncan Scott was indeed in the water this morning, although he opted out of the finals tonight. He placed 4th out of prelims in the 100m fly in 54.86, while earning the 6th seed in the men’s 400m freestyle with his AM time of 3:56.96.