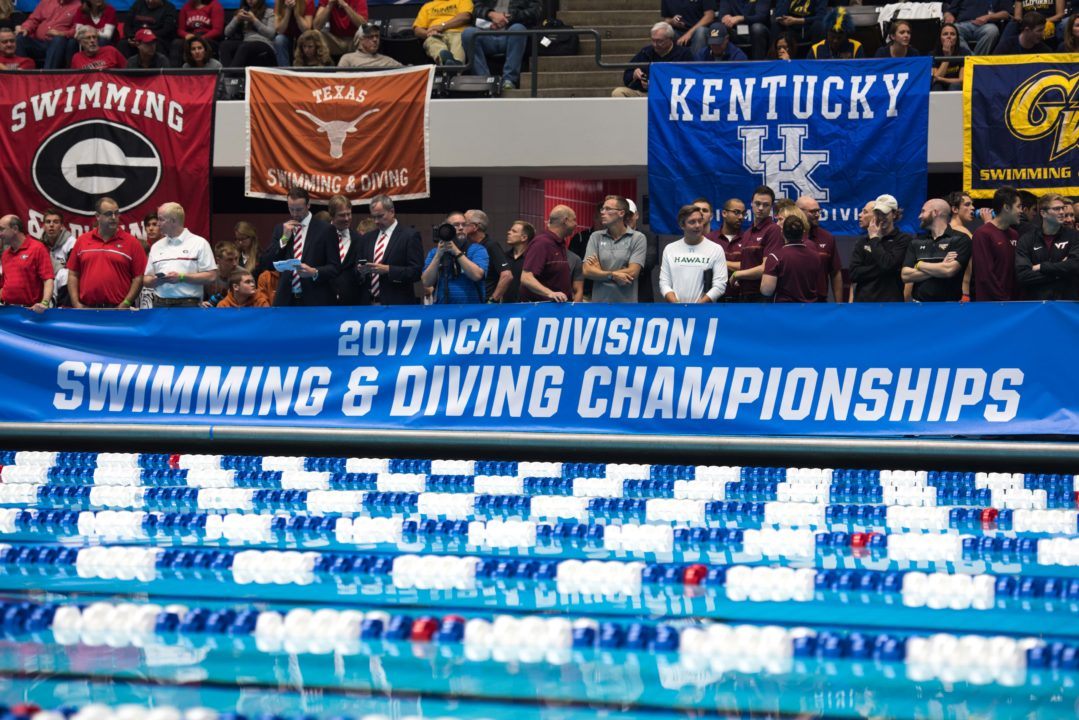 On August 1st, a multitude of new NCAA Division I rules for the 2017-2018 school year went into effect.

While many of the new rules pertain specifically to basketball, football, baseball, and gymnastics, a few of the rules will affect the NCAA as a whole, and a couple have been enacted specifically for swimming/diving and water polo.

First, for swimming and diving, there is a concerted effort to revitalize the College Swimming Coaches Association of America National Invitational. This will encourage participation in a high-level postseason meet for swimmers and divers with NCAA B-cuts who did not make the NCAA Championships. The idea is that by exempting the practices and the competition itself for this meet from a team’s maximum competition dates and practice season limitations, more teams will be willing to take qualified swimmers.

For water polo, teams will now be able to employ three coaches who are to allowed scout and contact recruits. This is an increase from two coaches, which should allow for a more widespread and efficient recruiting process. The official ruling, proposed by the NCAA D1 Student-Athlete Experience Committee, states: “In men’s water polo and women’s water polo, to increase, from two to three, the number coaches who may be employed by an institution and who may contact or evaluate prospective student-athletes off campus.

It's August 1, which means some new @NCAA legislation goes into effect. Here's a new rule for our @TheSunDevils former student-athletes. pic.twitter.com/YwWVezcF69

A number of other minor changes regarding recruiting phone calls and contact are also effective now. Additionally, some new policies surrounding student-athlete well-being — time management analysis and a health and safety survey — are now in place.

You can view a summary of every new rule in regards to every sport here.

The B meet was and is a failure. The meet date conflicted with recruiting opportunities Because many coaches would rather take their kids to sectionals because it doubles as a recruiting trip. and as pointed out above, was attended poorly.

Not quite – the meet needs time to develop, especially if its going to gain traction as a “NIT” type championship.

It was not as popular before as the meet had to be a part of the 144 day practice & competition period – and few schools would want to commit to their practice season starting around 2-5weeks later than normal. With this waiver, this is no longer an issue. Hopefully it grows if it is a well managed and supported meet.

The meet failed because too many teams understandably did not want to give up their 144 days to attend. For those who attended it was most certainly was successful. Now with the post season exemption finally approved and the continued backing from the CSCAA, I expect modest growth this year (due to the late decision in date and location) and then the meet should take off in coming years with better advance planning.

From what I’ve been told/heard, it’s hard to do both recruiting/coaching the same weekend. Sectionals and otherwise, compliance officers start to worry. The lines get blurred and there’s potential for violations, intentional and unintentional. If you’re recruiting, you shouldn’t be on deck the same time/weekend. That’s really hard for smal staffs.

Coaches and teams also don’t have to attend this meet, they can go where ever they need and want.