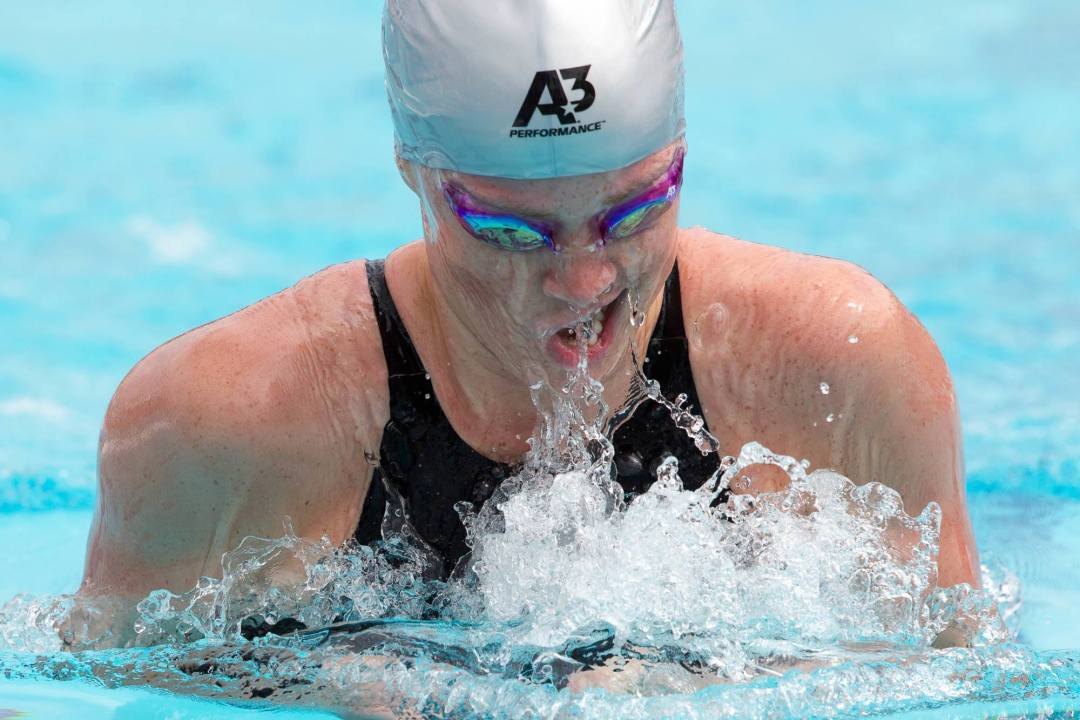 Emily McClellan is the top seed in the women's 100 breaststroke at the 2014 U.S. Winter National Championships. Archive photo via Tim Binning/TheSwimPictures.com

Regan Smith will take on the 200 free/100 fly double at the first full session of finals at the San Antonio PSS.

After FINA approved the new rules for underwater pullouts on Saturday morning, questions began to roll in as to when these new rules would be put into effect.

For FINA competitions, including the Short Course World Championships that begin next Wednesday in Doha, the change will be immediate.

This afternoon, USA Swimming has confirmed that the new rules will also be in effect for the upcoming Winter National Championships that begin the same day as Short Course World, December 3rd, meaning that the rule is being adopted immediately by USA Swimming as well.

The new rules allow swimmers to take one dolphin kick on an underwater pullout at any point prior to the initiation of the first breaststroke kick – a divergence from prior rules that required a separation of the hands before the dolphin kick.

Somewhat unrelated- what is the latest on the air-quality at Greensboro Aquatic Center? From what I remember reading a few months ago it was better, but we all remember how it was last year for Winter Junior Nationals. Any knowledge swimswam?

The air was great at the Y Nationals last April.

what about NCAA? do they automatically follow USA swimming right away?

weirdo – we have a request out to the NCAA as well, but generally the NCAA would not automatically accept the rule.

Braden – – have you seen the USA Swimming decision in writing yet on their site, or was it a reply to your request? Hoping to be able to point to it for our officials and don’t see it yet.

nmckenna – was a reply to my request.

Thanks for the quick reply. I’ll monitor the USAS communiques.

What difference does it make? I have seen most ncaa breaststrokers dolphin kick with the hands still steamline and ncaa officials never call it. They’ve already been been doing it for the last couple of years.

I’ve yet to see an CSOA official in position to call it. But with all the swimming programs being cut, I’m just happy for those that remain.

NCAA will not make a rules change mid season for this. It will remain the same for the 2014-15 swim seasonl

The NCAA last made a mid-season rules change in the plastic suit era. After some ridiculous times at mid-season meets, when some relay teams featured swimmers wearing two layers of tech suits (LZR under for compression, Blue70 on top for buoyancy), the rules committee had an emergency meeting. That was mid-December. It was decided at that meeting that the wearing of two suits would no longer be allowed in competition. That meant even the old practice of drag suits on top of briefs in meets. I don’t know where the new pullout rule will fall on the emergency scale.