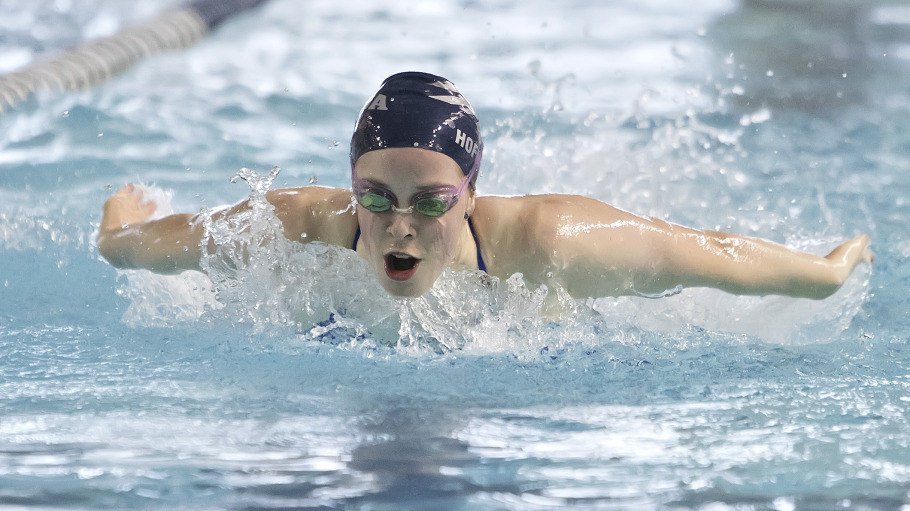 On Saturday the University of Nevada – Las  Vegas Rebels fell to defending conference champions: the Nevada Wolf Pack in the first dual meet of the season for both teams. The Wolf Pack swept the sprint freestyles. They were lead by Teresa Baerens in the 200 free. Baerens is a senior hailing from Germany, whose sister is a sophomore on the team.  Other sprint wins came from a pair of sophomores Jamie Reynolds  and Caitlyn Richardson. In addition to sweeping the sprint free’s, the Wolf Pack also took home first place in both the 200 medley and 400 free relay.  Meanwhile,Emma Payne and Jaeger Turner took wins in the 100 fly and 100 back, respectively.

The diving events were also swept by a duo of Wolf Pack sophomores with Zoe Lei taking the 1 meter and  Toma Shmitova taking the 2 meter.

The Wolf Pack return to action Saturday the 22nd at their Alumni Meet, while the Rebels have three weeks off before hosting Utah on November 4th.

RENO, Nev. (UNLVRebels.com) – The UNLV women’s swimming and diving team opened its season Saturday with a 144-98 setback on the road at in-state rival Nevada, Reno. Despite the loss, the Rebels showed promise under first-year head coach Ben Loorz, highlighted by winning four events against the defending conference champions. The contest was the first meeting between the two as part of this year’s Governor’s Series, the all-sports competition between the two schools that is sponsored by NV Energy and Barrick Gold. The points for swimming and diving will not be awarded until after the teams compete again against each other in the 2017 Mountain West Championships.

“I was really pleased with our freshmen to come into their first meet and get some individual wins,” said UNLV head coach Ben Loorz. “For Mayte, Ida and Sophia to earn first place finishes in their first collegiate meet, I’m excited for that class to come in and make that kind of start. And we had some strong swims from our returnees as well, including Kristina in the 200 IM. There are some things we have to work on and get cleaned up, but I feel we’ll be in better shape to take on Nevada, Reno when we face them next in our Winter Invitational in December.”

After dropping the opening relay, the Rebels claimed the first individual race, the 1000 yard free, thanks to freshman Mayte Cano in a time of 10:36.97. Another event winner was senior Kristina Hendrick in the 200 yard IM (2:06.91), while she followed by teammate Kyndal Phillips in third place 2:09.04. Another freshman showing up big in her first collegiate meet, Ida Schutt led all swimmers in the 500 free with a time of 5:06.77.

Other notable performances from the Rebels include Kim Hendrick taking second in the 100 fly (57.95) and Goezde Tekin in third (58.56).

The women are back in action while the men will compete for the first time this season on Friday, November 4, when they host Utah in Buchanan Natatorium.

RENO, Nev. – In an afternoon that saw seven individuals win an event, the Nevada swimming and diving team came out victorious over UNLV, 144-98, on Sunday. The victory over the instate rival extends the Pack’s dual match win streak to 11 matches and gives Nevada an early 1.5-0 lead in this year’s Governor’s Series.

“This was one of two home meets for our seniors, so it was really special to see them racing out there,” Nevada head coach Brendon Bray said. “I thought (they) represented us very well. They swam great and I’m really happy about just the improvement in general.”

The Pack started the afternoon on a strong note with both the A and B 200-yard medley relay team’s taking the top-two spots to win the first event of the day. Nevada’s first individual victory came courtesy of senior Teresa Baerens, who won the 200-yard freestyle with a time of 1:53.58.

Sophomore Jamie Reynolds won what turned out to be an exciting finish to the 50-yard freestyle. With a time of 24.33, Reynolds narrowly outlasted her opponent by just 0.08 seconds in her only individual event of the day.

Junior Emma Payne took the top spot in the 100-yard butterfly in 57.82. She too won by a slim margin, beating her opponent by thirteen-tenths of a second. In the 100-yard freestyle, sophomore Caitlyn Richardson swam for a time of 52.72, which was good enough to finish in first. The event was Richardson’s second victory of the day as she was part of the A team that won the 200-yard medley relay.

For junior Jaeger Turner, she was involved in two wins today, including the 100-yard backstroke, which she swam in 56.93. Turner also contributed the A team’s win in the 200-yard medley relay. The final swimming event was capped off with a 400-yard freestyle relay from both Nevada’s A and B teams, with the A team winning the event in 3:31.15.

The strong performance that the Wolf Pack diving team displayed on the afternoon allowed all three members to finish in the top-three of the 1-meter diving competition. With a score of 313.13, sophomore Zoe Lei won this event for the second time this season. Her first victory came at the Chick-fil-A Invitational (Oct. 8).

In the 3-meter diving contest, sophomore Toma Shmitova came out on top by scoring 314.78 points. Nevada’s next swimming and diving meet will take place on Saturday, Oct. 29 at 12 p.m. PT when the team travels to Fresno, California to take on Fresno State.