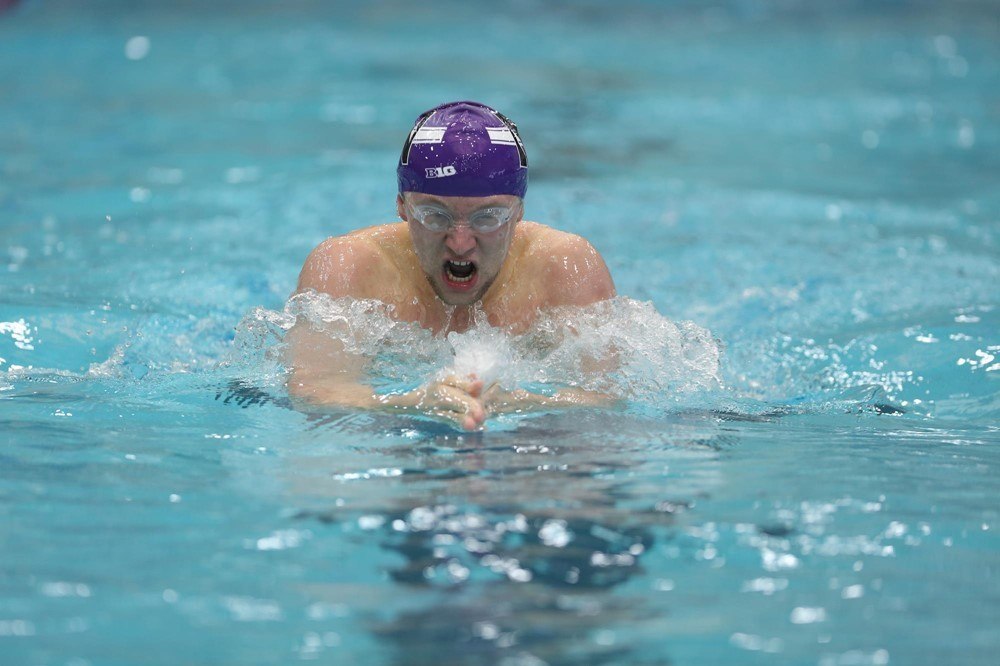 The Wildcats picked up first place finishes in eight of the 14 swimming events, while sweeping the diving events. Current photo via The Daily Northwestern

The Northwestern men’s swimming and diving program begin its season with a dominating 167-128 victory over Eastern Michigan Friday afternoon at the Norris Aquatics Center.

The Wildcats picked up first place finishes in eight of the 14 swimming events, while sweeping the diving events.

Northwestern set the tone right off of the gate by taking the top two spots in the 200-yard free. The team of Alex Snarski, Will Hofsstadter, Arjun Sharma and Almog Olshtein placed first with a time of 1:32.35, while teammates Andy Jovanovic, Thanas Kountrobis, Ryan Tateand Gage Kohner came in right behind at 1:32.41.

Senior Jordan Wilimovsky, fresh off his Olympic Games performance, dominated the 1,000 free, finishing first with a time of 9:05.29. Wlimovsky’s time was 34.37 seconds faster than the next finisher, which was teammate Jonathan Lieberman at 9:39.66.

Wilimovsky continued to impress as the senior climbed right back into the pool following his win in the 1,000 free by capturing the top spot in the 200 free (1:41.09). He edged out NU’s Charlie Cole by five hundreths of a second (1:41.14).

Wilimovsky would go on to cap his afternoon by winning his third event of the day when he swam the 500 free in 4:27.02.

Eastern Michigan claimed its first victory of the day in the 100 back when Tosh Kawaguchi and Cole Bateman finished first and second with times of 50.20 and 51.10, respectively.

In the 100-yard breaststroke, the Wildcats’ Thanas Kountroubis and Will Hofstadter swam a tight race with Kountroubis (57.46) edging out Hofstadter (57.48) by two hundredths of a second.

Almog Oshtein showcased his speed in the short-distance free events claiming wins in both the 50-yard and 100-yard races.

On the diving board, Andrew Cramer and Ben Magliato finished 1-2 in both the 3-meter and 1-meter events.

The Eastern Michigan University men’s swimming and diving team opened its season on the road in Evanston, Ill. against Northwestern University Friday, Oct. 14. Despite a sweep of the backstroke events by sophomore Tosh Kawaguchi(Cary, N.C.-Cary) EMU fell, 167-128.

After a third-place finish in the 200 medley relay, senior Kyle Lichtenberg (Clarkston, Mich.)touched in with a time of 9:47.40 to earn third in the 1000 freestyle.

Northwestern returned the favor, claiming the top two spots in the 100 breaststroke. Freshman Matthew Tsenkov (Sofia, Bulgaria-General Vladimir Stoychev) touched in with a time of 59.10 to take third in his first collegiate race.

EMU claimed two of the top-three spots in the 200 butterfly behind freshman Parker Saladin(Buchanan, Mich.-Buchanan) and junior Logan Burton (Chesapeake, Va.-Hickory). In fourth after the first 50 meters of the race, Saladin worked his way into second at the midway point and never looked back. Clocking in with a time of 1:51.85, Saladin finished second, while Burton’s time of 1:52.65 was good for third.

After NU swept the top-three spots in the 50 free, Tyson tried to get the Eagles back on track with a second-place finish in the 100 free.

As they did in the 100 back, Kawaguchi and Bateman provided the Eagles with a 1-2 punch in the 200 back. Kawaguchi touched in first with a time of 1:49.68, besting the nearest Wildcat by nearly three seconds. Meanwhile, Bateman clocked in with a time of 1:51.20 for second.

On the heels of a third-place finish by Tsenkov in the 200 breast, freshman Alex Arrieta(Miami, Fla.-Doral Academy Center) grabbed third in the 500 free with a time of 4:44.64.

The Eagles closed out the swimming events with first place finishes by Burton and sophomore Ricky Perez. Burton edged out NU’s Arjun Sharma by less than a tenth of a second to win the 100 butterfly, while Perez notched his win in the 200 individual medley.

Eastern Michigan returns to the pool next weekend, Oct. 22, when it hosts Denison. Action is slated to begin at 1 p.m. in Jones Natatorium