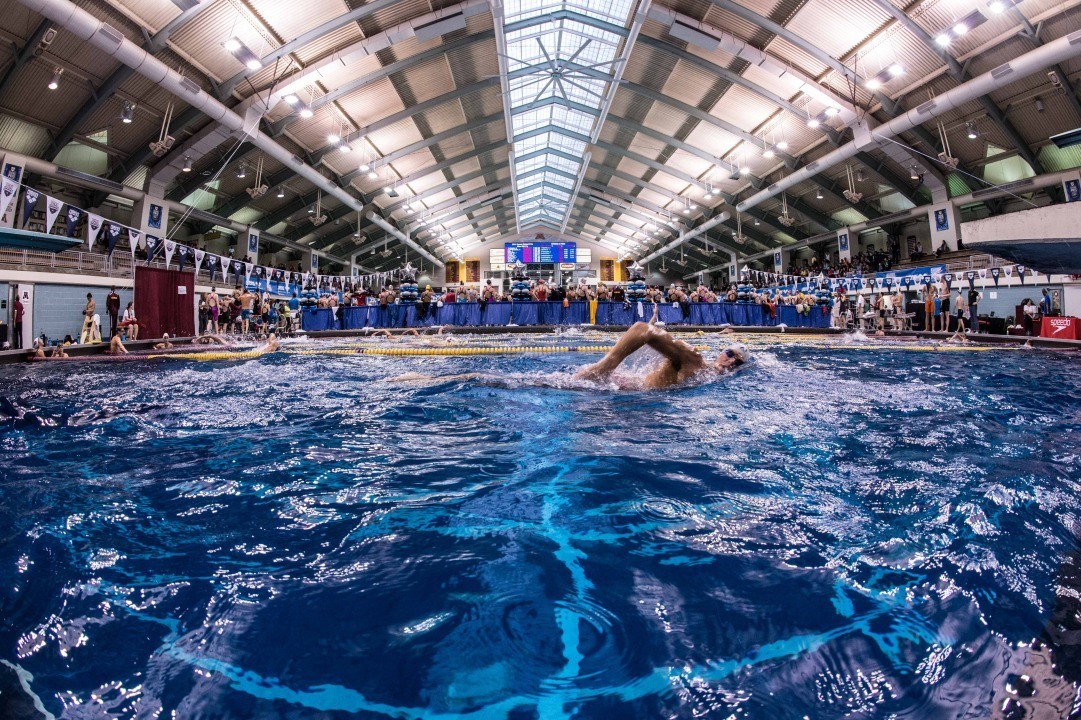 The Jean K. Freeman Aquatic Center, which last year was home to the NCAA Championships, welcomed in day 1 of the 2019 Mountain West Conference Championships on Wednesday. Stock photo via Mike Lewis/Ola Vista Photography

The two-time defending champion Boise State Broncos found themselves in a hole after day 1 at the 2019 Mountain West Conference Championships. San Diego State won the day’s first 2 events, and Nevada the 3rd, to take the top two spots after day 1 of the meet.

For the victorious San Diego State team, it was Elliyana Ferrin (24.38), Klara Thormalm (27.03), Courtney Vincent (23.03), and Alma Thomalm (22.32) who made up the winning relay. The middle two legs were the difference makers, opening up a 1.2 seconds lead on their counterparts from Boise State. Boise State anchor Abbey Sorensen dug furiously to make up the deficit, anchoring her team’s relay in 21.59, but it wasn’t enough. Her closing split, however, was 4-tenths faster than she was on this same relay last season.

San Diego State missed the NCAA Qualifying Standard in that relay by an excruciating .01 seconds.

The Aztecs picked up more points on the 1-meter diving board, where Lechuga Gonzalez won with a score of 325.55. She was her team’s only A finalist, as compared to 2 for Nevada, which allowed the Wolf Pack to take the lead in spite of the SDSU win.

While Nevada’s day 1 lead seems daunting, this is a meet that should ping-pong back and forth for a while. New Mexico, for example, has 3 of the top 4 seeds in the 500 free on Thursday, which could push them into a lead early in the day. Boise State entered the meet as favors per projections by the Finis Swimulator, but this shapes up to be the best kind of conference barn burner: with all teams swimming well and dropping big time through day 1.