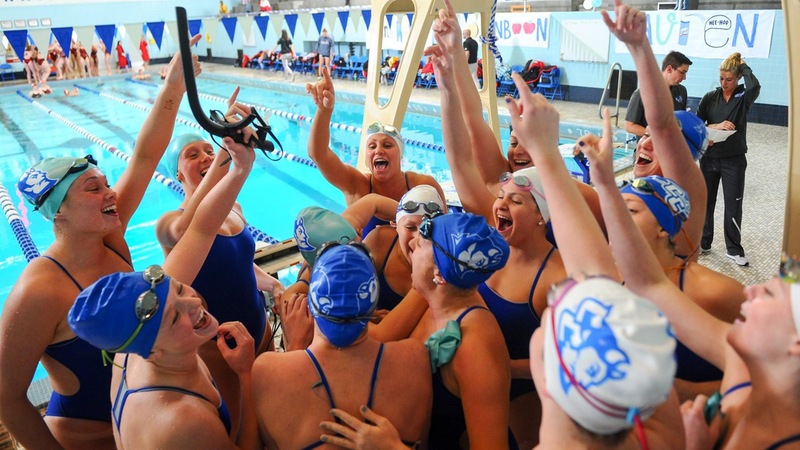 The Bryant men remain in the lead after day two on the second day of the 2022 Northeast Conference championships, but Central Connecticut State took the top spot over the defending champion Bryant women after the latter team was leading on day one.

The Central Connecticut women swept all the individual events of the night (500 free, 200 IM, 50 free), including when they took the top three spots in the 500 free. However, the Bryant women finished off strong with a victory in the 200 medley relay.

The Howard men claimed two individual titles and multiple podium spots, but a win in the 200 medley relay, as well as diving points, ensured that Bryant remained on top.

Central Connecticut took another title in the 500 free when Katie Czulewicz defended her crown, swimming a 4:55.90 that is just a few seconds off of her personal best and winning time of 4:53.96 from last year’s meet. The event was a podium sweep for the Blue Devils, as Cruzlewicz’s teammate Abbey Keane finished behind her (4:57.15), and Shannon Welcome was third (4:58.29).

Freshman Cassidy Stotler was dominant in the 200 IM, touching first in a 2:03.04 that was faster than the field by a whole three seconds. Wagner’s Bree Anderson was second (2:06.01), and Sacred Heart’s Nicole Tingley finished third (2:06.95). Wagner’s Mallie Mora, who swept the IM events last year, was pushed down to 15th. She went a time of 2:09.94 that was significantly slower than the 2:05.17 she swam to win the event last year.

Last year’s NEC most outstanding swimmer, Jeanette King of Central Connecticut, made it three in a row when she won the 50 free in a time of 23.13. This time faster than the 23.15 she swam to win the title in 2021, but a little slower than the personal best of 23.09 that she swam to win it in 2020. Long Island’s Jacqueline Grabowski swam a 23.42 to take second, and Bryant’s Laurel Carey bumped up from her fourth-place finish from last year to take third (23.56).

Women’s Scores After Day One:

Howard took their second victory of the night when Miles Simon upset defending champion and top seed, Matthew Mays of Bryant, to win the 200 IM title in a 1:49.55. His time is just short of Mays’ meet record of 1:48.21. Bryant’s FuKang Wong finished second (1:50.37), and Mays repeated a podium finished when he took third just a few tenths behind his teammate (1:50.44).

Long Island’s Alejandro Pascu Del Cid, who finished second in the event last year, bested both his own personal best and the meet record time when he won the 50 free in a 20.32. The old record of 20.52 was set by Djole Spasic, the only man who beat Pascu Del Cid last year. Spencer Miles of Howard placed second (20.44), Connor Lofstrom placed third (20.45), and Mark-Anthony Beckles was fourth (20.48), which meant that all top four finishers from this year were faster than the first-place finisher in the event last year.