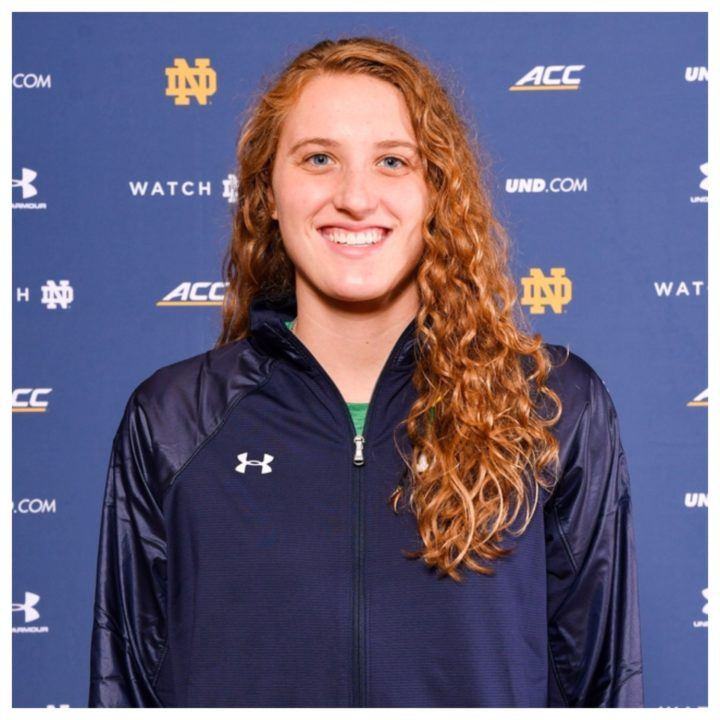 Notre Dame's Luciana Thomas, above, almost broke the Notre Dame school record in the 200 fly at the Purdue Last Chance meet on Saturday.

Notre Dame sophomore Luciana Thomas made the most of her lone swim on Saturday at the Purdue “Last Chance” meet, ensuring that her last chance wasn’t her last swim of the 2019-2020 NCAA season.

Thomas swam a 1:54.70 in the 200 butterfly on Saturday, which was only .04 seconds away from the Notre Dame school record in the event. Further, the time all-but-guarantees her a spot at the NCAA Championships in March. Coming into Saturday (with the Pac-12, among several mid-major conferences, yet to swim the 200 fly), Thomas ranked 36th in the nation in that event. With between 36-40 usually earning invites in each individual women’s event to the NCAA Championship meet, that left her firmly on the bubble. Her nes best time jumps her to 21st in the nation, and with more than a few Pac-12 swimmers likely to bump her, she is an almost-definite qualifier for NCAAs.

Her teammate Colleen Gillilan, a freshman who swam 1:54.79 at the ACC Championships, now slides to 22nd in the nation, which also gives her a likely spot at NCAAs.

Alos in that 200 fly on Saturday, Northwestern freshman Ally Larson improved her qualification status with a 1:55.84. That not only cut half-a-second off her own Northwestern Record set at the Big Ten Championships, but it bumps her from the bubble at 38th place nationally to a much-more-secure rank of 31st nationally (though that’s still not a lock).

You all should check out the Tennessee last chance meet too